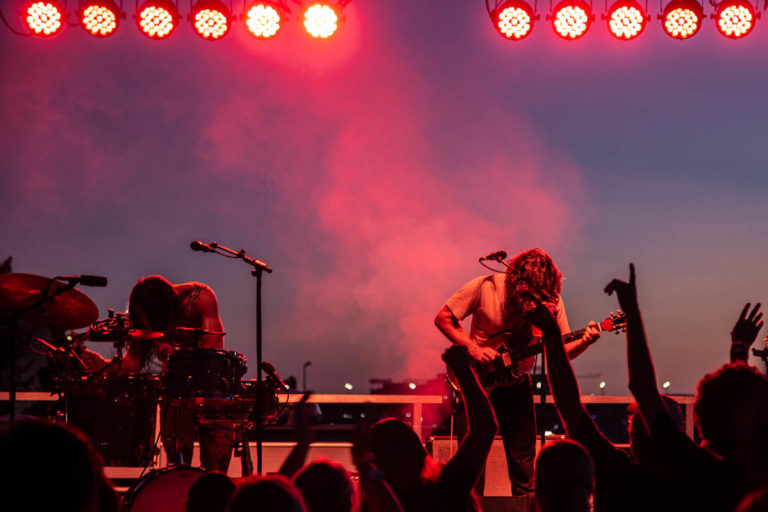 I cannot lie. It was hot. That said, it didn’t rain, or more accurately, storm, like it did last year. Hydration was a priority and water was free for most of the day. There was a bit more shade, the food was good, the drinks were great. Staff and all the various sound and other support personnel made the day flow smoothly and kept the music rolling.

And the music. The music. A number of people joined the event in progress, later in the day, probably due to the heat. Unfortunately, they missed great music. From the very first artists, a blend of local and out-of-town, the music was excellent. Rusty Odom and others who built the line-up did an excellent job curating the entertainment.

Daniel Markham started promptly at noon and the musicians on the two stages starting throwing the gauntlet back and forth in a flow that didn’t stop. The idea of having two stages in close proximity and having the music start on one when it ends on the other was brilliant. There was no lag, making a trip to the restroom or to grab some food, a decision that required thought.

From that beginning, various artists played festival-length sets. Local favorite’s Bark kicked off the Blank Stage before throwing it back to Ben Dickey on the Mackie Stage. It’s harder for a singer-song writer to draw a focus to intricate lyrics, but Dickey drew the early crowd in and kept them with his excellent song-writing.

The Royal Hounds are a local band that isn’t exactly local. Their rockabilly adventure started here, but the group is now based in Nashville. We were lucky to have their high-energy show back in town, and they cranked the crowd up to the next level. Three Star Revival, another local band with an emerging wider following and an increasingly sharp sound kept the energy flowing.

My anticipation was high for the next artists. I’d fallen in love with them several years ago when they appeared at Rhythm N’ Blooms. At that time known as John and Jacob, they’ve now changed the name of the group to The Brummies, but John and Jacob still front the group. They have new music and they seemed excited to share it. They continue to impress me with their ability to churn out song after song of pure pop pleasure. They are one of the best writing teams I’ve encountered for music that is musically delightful with little pretension of aspiring to anything more.

Benji, an artist from Pittsburgh, Pennsylvania, and one of my favorites from this year’s Rhythm N’ Blooms, brought his high-energy rap and soul to the Mackie Stage with the city sparkling in the background. Knoxville favorites Cereus Bright and Mic Harrison and the High Score delivered excellent sets.

The final local artist of the day was the widely anticipated return of LiL’ iFFy. Wil Wright, AKA Mr. iFFy, told the crowd about all the changes in the life of the band since they put the project on hiatus. Babies were born, new careers were launched, weight was lost. None of the changes diminished the music by one whit.

The band absolutely blew the stage apart. I’m one of Wil’s many admirers through his various projects. Interesting at every turn, he’s always creating a new and amazing path. The group was excellent, the energy non-stop. It’s the stunning stream of words that make an iFFy concert a next-level experience, with the complexity and word-play delivered with perfection. The biggest surprise to me was the inclusion of new material. Could a new iFFy era be upon us? America could use some LiL iFFy right about now.

The penultimate artists of the night, Illiterate Light rivals the Black Keys and White Stripes for amount of sound generated by two people. And it went well beyond a simple wall of sound with an excellent set of songs. The band was new to me and I’m now a fan. By the time they closed their show with Growin’ Down, the crowd was exuberant. Their album comes out in October and they will be stars if there is any justice in the world.

The night ended with the soul stylings of Devon Gilfillian. Drawing deep from the well that includes Sam Cook and Jackie Wilson and sweeps through Marvin Gay and Al Green with an edge that draws from more contemporary music, a little church broke out in the night at Suttree Landing Park. The crowd sang along for Bill Wither’s “Lean on Me,” and the day was given a perfect cap. Rusty and Blank Newspaper delivered a delightful day in South Knoxville.

I plan to load the remaining photographs from the day to the Inside of Knoxville FB page sometime today.