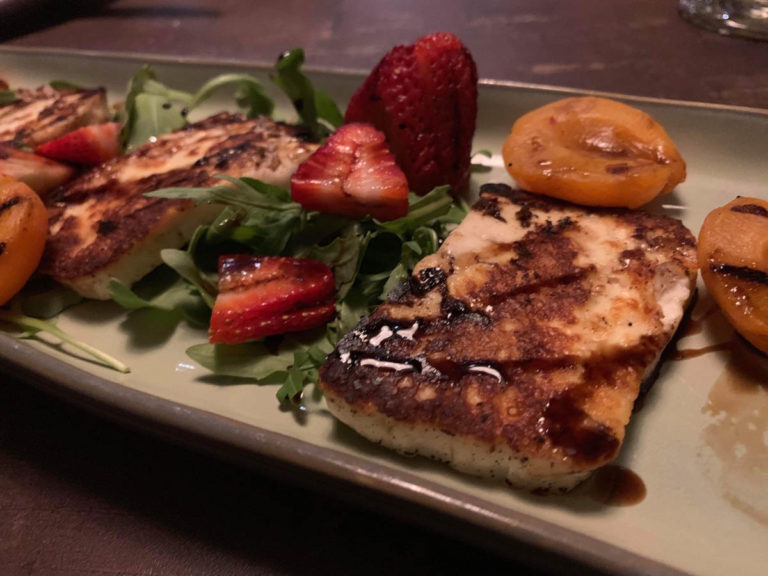 (Written by AppalachianGastroventures for Inside of Knoxville. This is the third installment in their monthly series of restaurant reviews, allowing for further exploration of local restaurants after their opening. Check out their blog for many more dining experiences!)

Halloumi or haloumi (/ h ə ˈ l uː m i /) is a semi-hard, unripened, brined cheese made from a mixture of goat’s and sheep’s milk, and sometimes also cow’s milk. It has a high melting point and so can easily be fried or grilled. Rennet is used to curdle the milk in halloumi production, although no acid-producing bacteria are used in its preparation.

The island of Cyprus is most famous for its production of halloumi. Located southeast of Greece in the Mediterranean Sea, its residents have been making halloumi for eons. If you look closely at specialty grocery stores, you can find it among racks of other cheeses, and lucky for us it’s been on the menu for our visits to Kefi in Knoxville’s Old City.

Kefi, which according to its website roughly translates to “profound passion,” opened its doors last year. Lovers of Greek and Mediterranean food, we first visited with high hopes and returned with eager appetites.

And nothing has disappointed. Including the halloumi.

The unique cheese is one of several cheese mezze that Kefi offers. There’s a feta broulee and a saganaki of pan-sauteed kesseri cheese. But while the saganaki gets the tableside wow factor with its flaming presentation and shouts of “Opa!” the real triumph is in the halloumi. When we dined, credit card-sized slices as thick as a slide of bread were paired with strawberries, microgreens, and balsamic vinegar. Other fruits can also be used.

Halloumi doesn’t melt, which makes it perfect for grilling and serving hot. Its texture makes it squeak a little bit when it’s chewed, revealing a brininess that is a perfect complement to the strawberries and greens, with the balsamic drizzle deepening the flavors.

We probably could have ordered several more dishes of halloumi and left happy, but that wouldn’t have been fair to the rest of the menu. As with any mezze restaurant, small dishes are brought as they are completed, and we started with a sampling of spreads and breads: tzatziki, hummus and spicy feta.

For our second course, we had a salad of greens, radish, tomato, cucumber, lemon-vinegar dressing, and zaatar, a distinctive Middle Eastern spice blend that is typically made from dried thyme, oregano, marjoram, toasted sesame seeds, and salt. The result is a taste that is very Mediterranean, aromatic and tangy at the same time, and it melded perfectly with the acid of the lemon-vinegar dressing.

Fried cauliflower followed, and the perfectly-browned florets were complimented by dried cherries, hazelnuts, microgreens, and maple, creating a delicate and earthy dish.

The final hot mezze we ordered was simple but craveably addicting: plump shrimp doused in a garlic butter sauce and showered with tomato and feta. The only lament was that there wasn’t enough bread with the dish to sop up all the delectable sauce, and picking up the plate and tipping it into one’s mouth ala cereal milk is frowned upon.

During a follow-up visit, we tried the tyropita, a delicate ricotta and parmesan filled filo dough pastry similar to spanakopita. The phyllo dough was buttery and flaky and the cheese oozed out of the center, making for a delicious complement to the halloumi. Other Greek standards are on the menu, from lamb to octopus, which we’re looking to try on future visits.

We left room for two desserts, and while the baklava is the star of the bottom portion of the menu, we opted for something we’d never tasted before: Kokakia, cream puffs with chocolate glaze and raspberry sauce that was refined and homey at the same time, like something you’d find in an outta-the-way café. We also had Galaktoboureko, a semolina custard flute with a honey-citrus drizzle on it. Think phyllo dough spring roll meets a cheesecake-like filling, with the perfect amount of acidity glazed on top to buzz your tastebuds.

Kefi offers a variety of alcohol, but their calling card is their cocktails on tap: a flight of three creative and generous pours was only $13. The guava margarita was good, the 6 Island punch appropriately tropical in its fruitiness, but the Tears of Chios (mastiha liqueur, vodka, lime juice, agave, red grapes and mint leaves) was unique and refreshing and the star of our flight.

The only problem (if you can call it that) with mezze-style restaurants is that there is so much on the menu to choose from and salivate over that you’re often left with a feeling akin to picking your favorite child. You want to love them all and can’t, but we’ll definitely be back again to try.

AppalachianGastroventures is written by a foodie couple living in West Knoxville that likes to call downtown their second home. Check out their blog at www.appalachiangastroventures.com, Instagram, and Facebook pages.

I’m probably taking a couple of days off this week to slip out of town. I’ll be back soon with more exciting news!