Have You Noticed We Have a Race for Mayor? A First Look at the Candidates 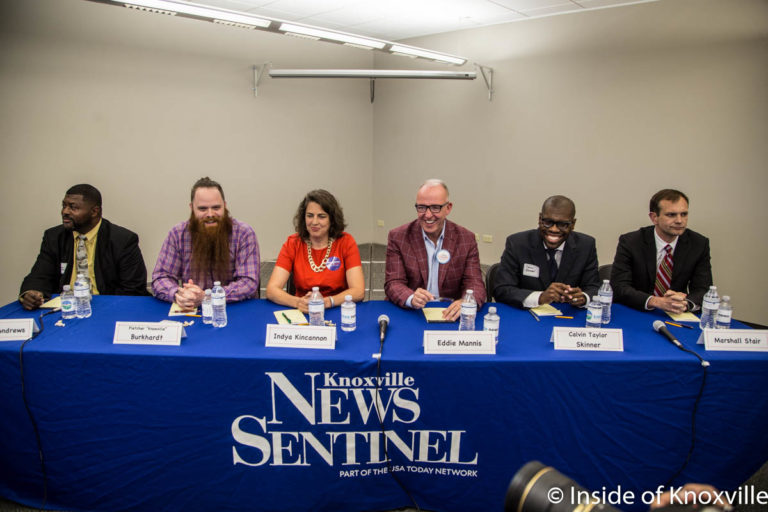 It’s been eight years since term-limited Madeline Rogero became Knoxville’s first female Mayor. She followed a popular mayor in Bill Haslam, who left to assume office as Tennessee’s governor and an interim of service by Dan Brown, Knoxville’s first African-American mayor. Her eight years have seen the continued resurgence of downtown Knoxville and the city, in general. She is term-limited and the race to be her replacement has begun in earnest.

Six candidates have qualified: Michael Andrews, Fletcher “Knoxville” Burkhardt, Indya Kincannon, Eddie Mannis, Calvin Taylor Skinner and Marshall Stair. You can find all the links to the candidates various social media platforms at the city’s “Go Vote,” webpage. Those are somewhat informative out the gate: Two candidates are only one social media platform. Michael Andrews only has a twitter account with ten followers and no tweets. Calvin Taylor Skinner only has a personal FB page.

At a League of Women Voters mayoral forum last night, little in the way of disagreements between the candidates emerged in response to questions generated from the audience. Candidates were friendly with each other and complimentary of their opponents. Still, there were differences that emerged as the night progressed.

In their opening statements, the candidates staked their territory: Marshall Stair is running on a continuation of the success of the last eight years during which he has been a city councilman. Mr. Skinner offered his experience in larger cities and promised to focus on affordable living and “cultural preservation.” Mr. Mannis touted his experience building a business and his stint as deputy mayor.

Ms. Kincannon emphasized her experience in community service, including her time as a school board member. Mr. Fletcher repeated his campaign slogan of “people over politics,” and said he would spend more time listening to the people. Mr. Andrews who is a barber and certified chef said he has a “one community mindset,” and that plans implemented by the city should work for everyone.

A question about Re-Code Knoxville did reveal some differences. Marshall Stair indicated he supports it as necessary to build a future city that we want for our children. Mr. Skinner opposes it and compared it to Urban Renewal from the 1960s. Mr. Mannis is also opposed, saying it has shifted and expanded from its original mandate.

Ms. Kincannon, noting that 53% of Knoxville citizens are renters, said she supports it because it addresses sustainable and affordable housing. Mr. Burkhardt opposes it saying it will hurt certain parts of town and he feels there should be a referendum on any changes, while Mr. Andrews said he supports it, but worries it may hurt some people who run businesses out of their homes.

A question about how each candidate, if elected, would use the expertise of the others on the stage mostly produced non-answers and flattery of the other candidates. One of the few humorous moments of the night came during this question when Mr. Skinner, noting Mr. Mannis’ suit, said he would consult with him on sartorial issues. Mr. Mannis quipped, “Thank you for appointing me Fashion Consultant for your administration.

Asked to respond to the recent cuts in indigent care by the county, the candidates all expressed support for the most vulnerable. Mr. Burkhardt said the city needs a mental health facility, while Mr. Stair noted that these cuts put the burden more on the city and that all levels of government should work together. Mr. Andrews said priorities are shown in use of money and said we needed to invest in complete healthcare. Mr. Mannis, noting his childhood poverty, repeated a quote that a good leader (mayor) needs to have the mind of a CEO and the heart of a social worker. Ms. Kincannon pointed to examples in her past of working for the most vulnerable (opposing out-sourcing, for example).

Asked about community policing, all candidates generally supported it, but with differences. Mr. Mannis said he would support precincts, while others noted the expense of this idea and the size of Knoxville not warranting that. Most called for better pay and benefits to assuage the current shortage of police and Mr. Stair noted that the city already has a version of community policing.

Asked how they would lift families out of poverty, most candidates spoke in generalities about creating jobs. Mr. Stair was the most specific, saying he would continue the city’s emphasis on community schools, affordable housing and workforce development. Mr. Burkhardt noted the lack of public transit to some of the job locations and said he opposed “TIFs to major corporations,” an idea which Mr. Mannis later pointed out isn’t a thing the city does.

A multi-part question regarding support for an affordable housing trust fund, there was little-to-no disagreement, with all saying they support the idea. Mr. Stair pointed out the city has spent $8 million on affordable rental funding while Mr. Burkhardt suggested the city isn’t applying for available federal grants.

Probably the strangest answers of the night came in response to a question asking what the candidates would do to ensure that Knoxville government doesn’t have its computer systems hacked and shut down for ransom as has recently happened to some American cities. Riviera Beach, Florida recently paid $600,000 in ransom when its computer system was successfully attacked.

I wasn’t sure what Mr. Andrews intended to say, while Ms. Kincannon stressed the importance of the upcoming hire of the head of IT before veering into making government more transparent, seeing why permits get bogged down and seeming to suggest that we crowd source security. Mr. Burkhardt noted the possibility of working with ORNL and UT on security before veering into transparency in government. Mr. Skinner discussed people who don’t have access to the Internet.

The answers were so far afield that Mr. Stair asked for the question to be repeated in an apparent effort to make sure he had understood it when it was asked. He noted the enormity of the problem and said no one can be certain they can stop hackers at this point, but that the city was already focused on the issue. Mr. Mannis agreed and said we need to move quickly on the issue.

The candidates were asked if they supported PILOTS and TIFs and audits to establish whether the city gets a good return on the investment. Mr. Burkhardt said if we market the city properly we won’t need them and that we must ensure the city doesn’t suffer a loss from use of the tools, seeming to suggest the city invests money directly (it doesn’t). Mr. Skinner’s answer didn’t seem to match the question as he talked about attracting businesses and diversity.

Mr. Stair noted he had voted for some and against others, but felt there were situations in which they are necessary and that downtown would not be what it is today if the city had not offered that help to developers working on risky projects. Mr. Andrews talked about bringing in “big industry,” and giving “first dibs” on jobs to Knoxville citizens while requiring a commitment that the businesses stay “twenty years.” He didn’t explain how we might compel them to do so, nor did he mention PILOTS or TIFS in his answer.

Mr. Mannis pointed out that these aids are for developers and not businesses and are sometimes necessary. Ms. Kincannon said they play a role, but she’d like to see them targeted to the struggling areas of town and she’d like to ensure that if they city helps the developers, that the community benefits commensurately with the investment.

An audience member wanted to know how the candidates would increase the percentage of city contracts which go to minorities. Mr. Mannis said minorities should receive contracts whenever possible, as is done now. Ms. Kincannon said we should do better and offered an example of breaking up large contracts into smaller pieces to allow smaller companies a chance. Mr. Andrews said a set percentage should be designated for minorities.

Mr. Burkhardt brought up nepotism in government, saying he would not be biased. Mr. Skinner said the city has done a dismal job of utilizing minority businesses and said the city should help minority companies expand their skill sets to allow them to be competitive. Mr. Stair pointed out that one of his first proposals was to have an office of Diversity and Inclusion.

Asked what they would do to stop gun violence, the candidates all talked about jobs and after-school activities. Mr. Mannis also suggested a connection to our opiod crisis. While not offering specifics as to what she would do, Ms. Kincannon offered the most intense emotional moment of the night when she recounted being present for the church shooting in Knoxville and having to cover her children’s bodies with her own. She also noted that suicides are a large portion of gun violence and that is an access problem. She said she supports Moms Demand Action.

Mr. Andrews said children need to understand that using a gun can be final, unlike the video games they play, in which they can press “reset.” He suggested that children visit a morgue to see a gun shot victim’s body. Mr. Burkhardt said he would emphasize mental health.

The choice is about to be yours, Knoxville. It is critical that we find the right person to continue the success we’ve enjoyed. Progress and growth are not guaranteed simply because we’ve had a good run. Learn more. Register if you aren’t (the deadline is late July in order to vote in the primary). And vote.