Fort Kid to be Spared Thanks to Donations 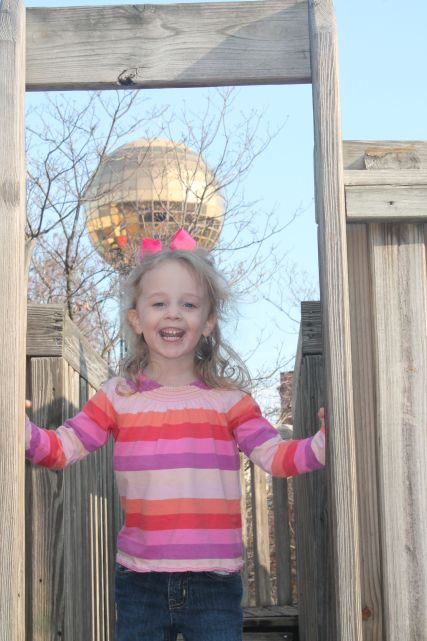 It’s been a part of our family off and on since it was built in the early 1990s. I have vague memories of work days with Urban Daughter tagging along with a friend. Maybe the mind does tricks. But she and friends went there and it was part of their childhood even though we lived in Rocky Hill at the time.

Fast forward a couple of decades and we moved downtown in 2009. As soon as Urban Girl was running around, she knew the difference between the “colorful playground” (World’s Fair Park) and the “wooden playground,” known to the rest of the world as Fort Kid. Depending on the outing she had a preference for one or the other or some days she wanted both. Urban Boy has followed in her steps and they’ve both loved the playgrounds.

Just a few years ago there was a face lift to the playground, but that didn’t turn out to be all that it needed. The city closed it last fall and, try as I might, I could not get Urban Girl to cross the yellow caution tape to enjoy a playground all to herself. Apparently, “caution tape means danger.” What happened to daredevil youth?

As it turns out, Thomas Boyd played on that playground as a youngster and wants his daughter and others to be able to do the same. He’s “helping to raise funds needed for a public-private collaboration to re-energize and upgrade the playground, which was constructed by volunteers 28 years ago and is in need of major repairs.”

The City of Knoxville designated $300,000 from its current budget to make the park safe again. That money will get into play this fall when the city replaces the compromised retaining wall with a gentle slope which should be longer lasting. Thomas Boyd (owner of Rebel Kitchen, Old City Wine Bar, Barley’s and Merchants of Beer) has pledged $200,000 and an anonymous donor has pledged another $100,000.

The project has the support of Knoxville Museum of Art Executive Director David Butler who sees potential to incorporate Fort Kid into KMA activities for children. Mayor Rogero has expressed gratitude for the support and the city’s commitment to retaining the community amenity. She says the community will once again be tapped for volunteer work in the planning and restoration.

Mr. Boyd is also planning a fund-raising concert and will announce details soon. “Fort Kid has always been a much-loved and central part of our downtown community.”Growing up in Knoxville and having gone to Fort Kid as a child absolutely helped develop not only my love of this playground, but also my love of our downtown. I can’t wait for my own child to experience this improved version of one of my favorite childhood memories!”

According to the press release, “The Fort Kid playground off World’s Fair Park Drive temporarily closed in November 2018 after a Knox County Health Department inspector responded to a citizen complaint and found a number of problems, such as exposed nails, trip hazards and splintered wooden components. The Public Building Authority over the winter made minor repairs to the City-owned playground, which reopened March 28.”

The playground is not ADA compliant and the deteriorating structures pose safety problems. Once the slope is repaired, improvements to the site can begin — probably next year. In the meantime, design and amenities of the improved playground will be open to public comment in a design charrette to be scheduled later this year.

“The City and its partners hope to complete the fundraising and design work for the new play area by the time the site preparation begins and the playground is closed temporarily at the end of this year. Work on the landscaping and new amenities will begin once the grassy slope is in place.”

Look for opportunities to volunteer suggestions and muscle, to donate money and to generally support the effort to return the play ground to its important role for Fort Sanders, downtown and near downtown children.