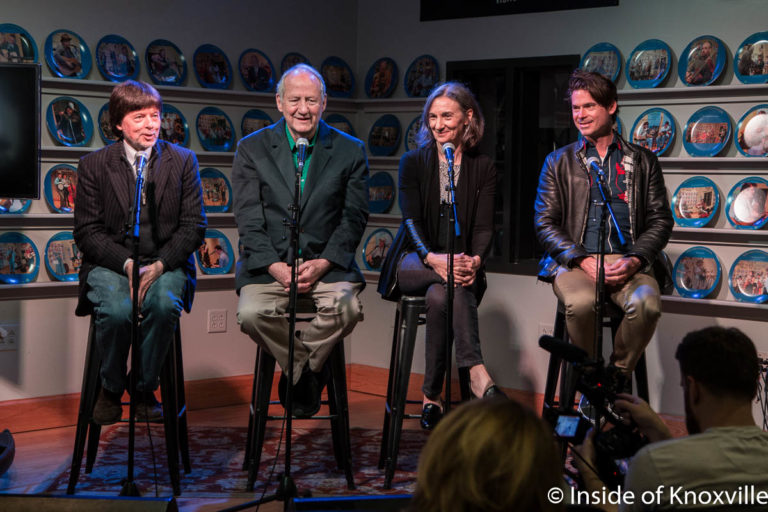 Ken Burns has tackled a wide range of subjects in his decorated career of producing documentaries. Best known for perhaps a handful, such as ‘The Civil War,” “Jazz” and “Baseball,” he’s produced roughly forty films on topics ranging from wars to sports, legendary people to government and national monuments. In all cases, it’s a story of America.

He just ended a brief promotional tour to promote his latest effort, “Country Music,” and chose east Tennessee for the concluding events including a screening of a small portion of the 16-hour documentary at the Clayton Center in Maryville. That same day, sponsored by PBS and Visit Knoxville, he, along with long-time collaborators Dayton Duncan (writer) and Julie Dunfrey (producer), and Ketch Secor (Old Crow Medicine Show) sat for an hour interview with Red Hickey at WDVX studio, followed by a panel interview with four members of the media, including myself.

The eight-part film will debut this September on PBS and, according to the press release:

COUNTRY MUSIC, written by Duncan, follows the evolution of country music over the course of the
20th century as it eventually emerges to become “America’s music.” COUNTRY MUSIC includes
interviews with more than 100 people, including 40 members of the Country Music Hall of Fame, nearly
600 music cues, 3200 photographs, hours of archival footage including never-before-seen photos of
Jimmie Rodgers and Johnny Cash and others.

COUNTRY MUSIC digs deep to uncover the roots of the music including ballads, minstrel music,
hymns, and the blues, and its early years in the 1920s, when it was called “hillbilly music,” and was
recorded for the first time and played across the airways on radio station barn dances. Burns and
Duncan connect the history of country music to the larger story of America, looking at how artists and
songwriting reflected periods of depression, war and cultural upheaval, and how the radio and later
television impacted the art form. The series also tells the story of the birth of country music in Bristol,
TN and how Nashville came to not only be the epicenter of the country music industry but Music City
USA.

Asked about their backgrounds in country music, Burns said, “My people come from Virginia. My father and grandfather sang me songs. I grew up with rock and rhythm and blues, but as an adult became more interested in country music. A friend suggested the topic in 2010.” Dayton said, “I grew up in Iowa. My first time to perform in public, I sang a Marty Robbins song in church. I fell in love with Dolly Parton on the Porter Wagner Show. The Johnny Cash Show presented an interesting range of performers and I fell in love with Emmylou Harris.”

Julie added, “My dad sang Glen Campbell. I loved Emmylou Harris, Waylon and Willie and didn’t think of them as country.” Ketch, interestingly enough, said he didn’t grow up with country music, “but I grew up with Ken Burns documentaries!” He said he bought a jew’s harp when his fourth grade class visited Monticello and that started it all for him.

Ken said every day is different in the making of a documentary. “Some days are just research and editing.” They did, “over one hundred interviews and eighty of them are in the film. Twenty have died since. It’s sad to have lost them, but I’m glad to have caught the footage. It’s hard to cut – take some of that Merle out!”

Speaking of playing to the stereotype of hillbillies or dumb country people, which a number of artists did, particularly early, Burns quoted Roy Clark: “I happen to own three custom-made tuxedos, but I know how to wear overalls.” Of Hee Haw, which played to many of the stereotypes, they quoted the great Charlie McCoy who said, “That show brought on new stars and revived the careers of others.

Ken said, “Every day was a “wow moment.” He mentioned, particularly Loretta Lynn, who he called a feminist even though she would, he said, reject the title, who stunned them in every interview. He also pointed out how striking it was that every early star of country music had a black mentor.

Mr. Duncan addressed the decision to stop in 1996: “We are historians, not journalists. We need a twenty-to-twenty-five year gap to be able to feel confident to determine what is important.” He added, “In 1996 Bill Monroe died. Ricky (Scaggs) and Marty (Stuart) talk about his influence. That year Johnny Cash and Rick Rubin cemented his legacy in country music with their first album together.”

Mr. Burns said the project took eight years, but that he works on multiple documentaries at any given time. He said stepping away helps provide distance and when he returns, he often sees connections between the various projects. “They overlap: Jazz, World War II, Civil War. It intersects with other stories. It isn’t in isolation.”

Of the origins of country music, the group talked about the blending of European and African music and instruments and also talked of the evolution of songs as they passed from English ballad to an adaptation in an African-American church and then a further-change at the hands of someone like A.P. Carter after hearing it in church.

A distinctive quality of country music, the group pointed out, that came through repeatedly was the connection to the fans that seems to be unique to country musicians. June pointed out that you would’t pat Frank Sinatra on the back and invite him to your picnic, but that wasn’t unusual for fans of country starts. Ken pointed out that Garth Brooks once showed up to a fan event where he wasn’t even expected and signed autographs for twenty hours. They added that you are still family even if you’ve ceased to have hits.

Concluding, Burns noted that the filming was completed before the “Me, Too,” movement, but you wouldn’t believe it. “That is because it is history: a gift of what the present is like with the perspective of history.”

Ketch said that the journey of his involvement over the past two years has been an emotional one. “I’m honored to be included. I’m a guy on the road going too far on too little.”

You can see the full two-minute preview we were shown, here. The series debuts on September 15.