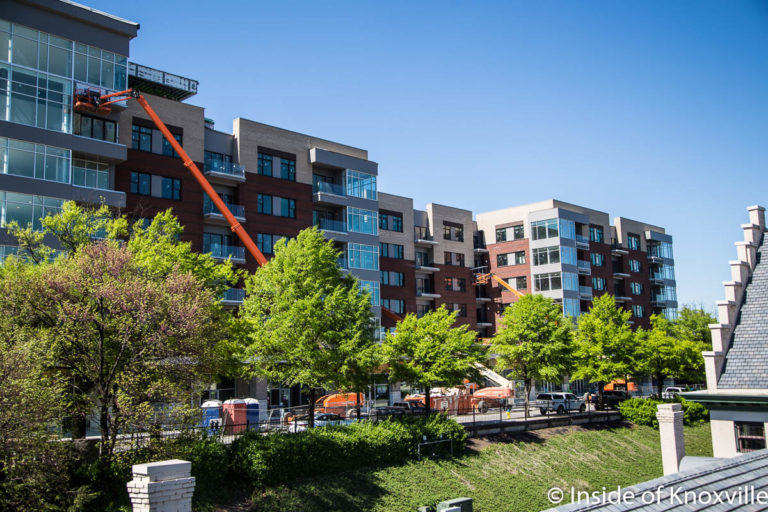 Chances are you’ve gotten so used to seeing them that you look right past them at this point. Not so many years ago, the sighting of a crane downtown would be something unusual. There wasn’t so much need for them. With empty buildings occupying the space between vacant lots, there wasn’t much need for work on the rooftops – if the buildings had roofs.

We’ve come a long way from those days. Drive through the downtown area in recent years and you’ll see cranes in multiple directions. UT and the Cumberland Avenue corridor have maintained a virtual forest of the things. We’ve seen very large ones on several projects downtown, including the recently completed Marriott and the cranes used to lift structures onto the coming rooftop bar above the Embassy Suites.

I was surprised to notice a crane beside the State Street Garage yesterday because I knew the crane had been removed from that project. I quickly realized it was lifting pieces to an HVAC system onto a building fronting Gay Street. A couple of blocks away another crane was doing the same for another building. To the east of Marble Alley, I spotted another one and three were lined up working in chorus on finishing touches for Regas Square.

Before I lived downtown I’d never considered how essential cranes are to a functioning urban area. It goes beyond construction. Large HVAC systems sit on top of buildings, of course, but so do many individual units for individual condos. Replace one and you’re probably looking at a crane.

New roof? Rooftop patio? Large window replacements? It’s all about the cranes. In a real way, the number of cranes is a decent barometer of the health of the city. Missing roofs and fallen down buildings don’t generally attract cranes, but a city with a growing population does.

All of which brings us to the new crane you’ll notice this morning if you are out and about in the city: A crane will be erected on the 100 block of Gay Street and will remain in place for one day only, doing work on the Sterchi Building as it continues its transformation from apartments to condos. That block will be closed to traffic, but businesses and sidewalks should not be impacted.

It’s a good thing, right? It needs to be our mantra during this era of unprecedented recent growth in our downtown. We aren’t necessarily happy to find closed roads and sidewalks, but its the only way we grow. Celebrate it — and avoid driving through the 100 block today.