The organization was started in 1969 to give a voice to African-American artists and has expanded in recent years to give voice to all manner of under-heard groups, from women to ethnic minorities, gay and lesbian communities and veterans. The journey began with and continues to include professional community theatre, but it has grown to include so much more.

I met with Jonathan Clark, Managing Director of the Carpet Bag Theatre (Linda Paris-Bailey is the long-term Executive and Artistic Director) to learn more about the group. I knew Jonathan through his spoken word persona as “Courageous,” he still does spoken word and the theater company is mounting a spoken word opera, “Swopera,” later this month (April 11 – 14, tickets here) at the Carousel Theatre on the U.T. campus.

While the group continues to do productions, it does much more. Jonathan points out that it all goes back to story and the idea that everyone has a personal journey, sometimes a very difficult one, and the stories of many groups have not been told. He’s fond of quoting theater and film director Liviu Ciulei who said, “A community can be measured by the questions its theater asks.”

The group actively collects stories from repressed or under-represented groups for their digital story program through story circles. Jonathan’s background in psychology fit well with the group’s traditional work incorporating story-telling experiences in the safety of small-groups. Participants, such as veterans, can tell their stories in order to “re-train the brain to make the trauma a memory, not a current experience,” which is how it feels in people with PTSD. By “reframing the story, the reclaim the story.”

They coordinate with local groups, such as Friends of Literacy and Project Grad, through which they have given the same opportunity to be heard to high school girls, and they coordinate with national groups as a part of the National Network of Theatres. Their work with veterans has taken them around the country and given them national recognition. Believing that theatre is the best way to expose people to others’ experience, themes of social justice naturally infuse their work.

The group experiences sometimes result in themes and situations to be utilized in their productions, but members’ confidentiality is always assured, though some want their story to be shared with a larger audience. Referrals to professional therapists (who often assist in the groups) are made for group members needing additional help. 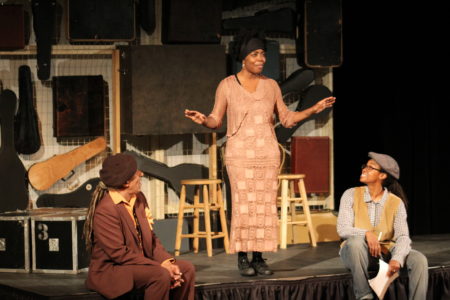 One of the events hosted by the group is a Youth Theatre Festival, an event that Jonathan credits for helping him understand that he might be able to succeed in a path he’d not considered before. For African-American youth and others to see people like themselves acting, writing and reciting poetry, creating visual art helps them picture possibilities for themselves.

Participating youth in the program get to see productions and meet the performers and directors, followed by developing art of their own with the guidance of professional artists. Performers are all paid an honorarium, another point of which Jonathan is proud. “Last year fifty artists were paid (including theatre productions) and we employee four full-time employees and two part-time contractors.”

Much of the year is spent traveling to places where the troupe is in high demand, often working through local theatre groups to give ten-to-twelve day seminars, readings, productions and story circles. Jonathan estimates he was traveling professionally about 120 days last year. They often return for follow-up.

He gave a recent example of their work in Eastern Kentucky with the group Higher Ground. Carpetbag Theatre helped them gather the stories important to local citizens about issues that impact them, such as fracking, strip-mining, high unemployment, closing schools and addiction. They built scripts and launched productions from the stories gathered and he feels it helped in very concrete ways.

“I want to do art that changes communities.” He thinks this can be accomplished by holding a mirror to the reality faced by the community members, allowing them to move past their present situations. Fifty years in, they still advocate for change.

The group recently acquired a Digital Story House at 3204 East Magnolia and they have an event scheduled on April 18 from 1:00 PM to 5:00 PM with Keep Knoxville Beautiful to spruce it up, along with surrounding areas. You can also see a brief performance by the group this Saturday at Chalk Walk on the Market Square stage.

“Swopera,” which begins next week and runs April 11 – 14 at the Carousel Theatre. Co-produced with Carpetbag by Steven and Mildred Ruiz-Sapp of Universes Theatre Group, it examines some themes discussed on this blog which are a point of ongoing struggle for many growing communities:

Swopera tells a contemporary story of gentrification, one family’s efforts to save their business, Lowell’s Soulfood Cafe, in light of changing community dynamics, and finding unexpected leadership in the youngest member of the family, Lem. The text is delivered in spoken word poetry and rhyme, accompanied by elements of hip-hop and soul.

Consider supporting Carpetbag Theatre by volunteering to help with their Youth Theatre Festival, by donating or by attending performances. Jonathan pointed out that only 21% of funding for the arts goes to the smallest 90% of arts groups, many of which are lead by women and people of color.