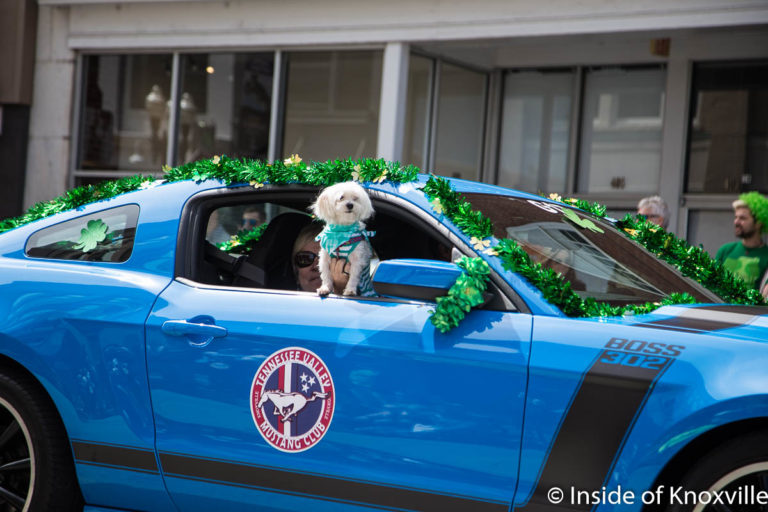 If you were anywhere near downtown Knoxville this weekend, you saw lots of green. Large green hats, green beads and glasses, people dressed in green and dogs dressed in green and even beverages adopting the traditional color of St. Patrick’s Day Celebrations everywhere.

It’s an interesting cultural phenomenon that I’m not sure has any parallel. We have festivals for other cultural, ethnic and national groups, but we don’t all dress up to celebrate if we don’t belong to the group. At Oktoberfest we don’t all pretend to be German in spite of a complete absence of genealogical connections. I’m probably over thinking the entire thing.

It’s all good fun and I’m given to understand there are people who use it as an invitation to imbibe mightily. While I’m not sure about all that, it’s clear that, for some, it’s an important reminder of their ancestors who came to this country as poor immigrants, many of them literally starving, and made a life as policemen, firemen and every other manner of self-sustenance. It’s easy to forget Irishmen and women were once reviled and rejected by many on our shores.

The parade is in its third year since it was reinstated in Knoxville and I have to say it is very impressive for a three-year-old. It’s a large parade even by Knoxville standards and the crowds, while not Christmas or Pride-level, are large. Thousands lined Gay Street for the event.

As always, for me, the children and puppies stole the spotlight. Lots of cuties from both groups joined in the fun. The floats themselves were also impressive for such a new parade. Of course there were businesses and political candidates and mustangs, lots of fire engines and more.

It would be great to see more bands join in, though I get that the one band featured the bagpipes and others wouldn’t have that. Several floats filled the musical void by blaring Irish music which helped keep the crowd festive. Urban Girl and Urban Boy seemed to have a good time as did most people in the crowd.

Of course there were many more connected and unconnected celebrations all around downtown all weekend. We waded into the children’s activities on Market Square, but found it confusing and overwhelming for the adults as well as the children. We baled holding our unused tickets. A lot of additional space and a little more organization and clear signage would help it flow better next time around.

So, we have another new (sort of) parade that has taken its place beside all the parades and celebrations in a town full of them. Whoever first said, “Everybody loves a parade,” must have been looking straight at Knoxville. As always, these represent less than half the photographs and I’ll have the remainder up later on the Inside of Knoxville Facebook Page.