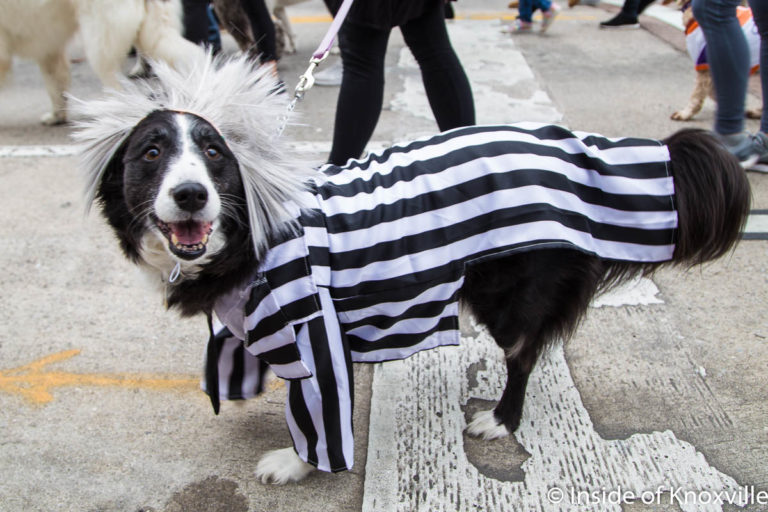 It was a bit chilly for this year’s edition of the Young Williams’ Mardi Growl event, but not nearly so bad as it could have been. A large crowd of humans and canines lined the parade route and, at least from my vantage, no puppy problems ensued as the costumed canines cavorted their way past.

As has been the case in the recent past, the Fulton High School Band lead the processional. Many of the band members were appropriately coiffed and they set the perfect tone. They primarily (exclusively?) played one song over and over: “When the Saints Go Marching In.” It was exactly what they needed to do as that is the only song most people outside of Louisiana associate with New Orleans style parades. I would love to see another band bring up the rear.

The puppies were, as always, perfectly picturesque. If there was a difference this year, it seemed to me the “floats” got more elaborate. Some are pictured here, whereas others aren’t pictured because I couldn’t spot a pooch on board when the parade passed my spot. The winner from my vantage would have to be the space shuttle complete with a spacedog.

If I could offer one minor suggestion, it would be to reduce the congestion. There appeared to be as many mutts as most years, but the parade ended quickly and without a view of most of the dogs because they were curb-to-curb across the street and tongue-to-tail from nearly beginning to end. My memory suggests they were much more spread out in the past and that was much better.

A final note: I loved seeing the children participate. As a person who grew up on the gulf coast with the Mardi Gras tradition, it warms my heart just a little to see the young ones getting at least a little sample of what I enjoyed so much as a child. And they are at least as cute as the dogs, don’t you think?

As always, the parade culminated on Market Square where booths were set up all about offering all manner of doggie goodies. The event is a benefit for Young-Williams Animal Center. I’ll have more photos up later on the Inside of Knoxville Facebook Page.