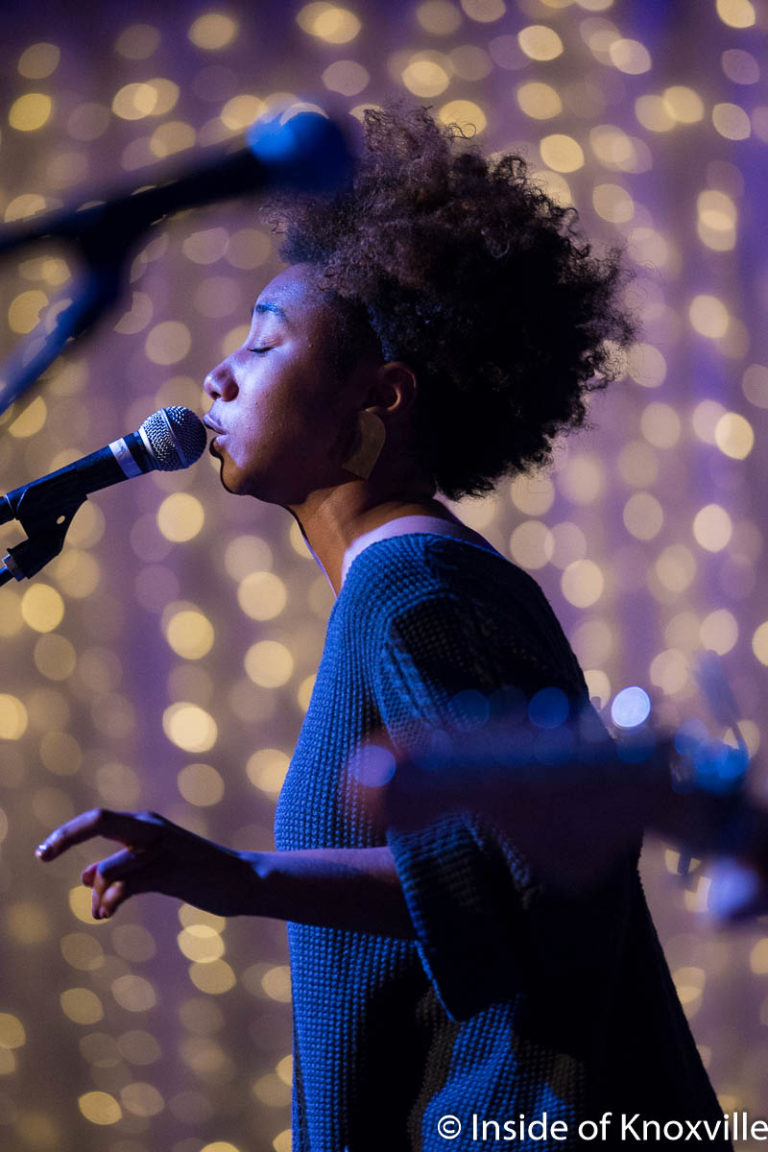 It’s one of my favorite musical events of the year and I know I’m not alone as I’ve heard others say the same. It’s tribal, but it’s open. Artists play one after the other for three nights, but there is no competition. It’s all about the hugs and an annual chance to support each other and donate their time for a good cause.

This year it was local community radio station WOZO. What started nine years ago as a way to support beloved local music critic Wayne Bledsoe has become a way to support many good causes in subsequent years. Housed at Relix Theater in Happy Holler each year, this year night one was held at The Outpost.

The music started Thursday night with one of my favorite artists. Local legend John Myers and his band. I talked to John before the show as he nursed a tea and said his voice wasn’t at its best. Ever the positive person, he said he’d do his best and at 82-years-old, he’s happy to be able to do what he loves. The show was wonderful, with a highlight for me coming with his performance of Mary Gauthiers’ “Mercy Now.”

More fun ensued with the Pinklets and their dad, local guitar and songwriting legend, Kevin Abernathy playing a fun set that blended his material with samplings of theirs. It’s remarkable how far the young women have come musically as they’ve continued to work their craft. Sister harmonies and a driving rock sound set them apart. It will be fun to see what the future brings for each of them.

The “appetizer” night ended with Grandpa’s Stash which is about as fun a band as you’ll ever want to see. The driving horns and excellent vocals. A highlight for me was a surprising cover of Traveling Wilbury’s song “Not Alone Anymore.” Always a good time to be had if you can catch them in concert. Look for them all around downtown.

Friday night’s show shifted to Relix and the crowd grew through the night, which is great and unfortunate. Missing the first artist is often a real miss and this was no different, with one of my favorite local vocalists (and poets), Daje Morris starting the night. She set the tone for a night that would be musically wide-ranging with a set infused with jazz, folk, R&B and poetry and was as delightful as ever.

Continuing the theme of musical range, Mike Baggetta took the stage as a solo guitarist for a set of ambient guitar work that defied genres. I kept thinking there has to be a spot for him at Big Ears. A guitar instructor at Pellissippi Community College, he’s a massive talent and you can often find him playing Barley’s on Monday nights.

Straight from ambient to heavy-hitting rock with Heavy Halves: logical, right? Great power rock-and-roll by the trio was followed by Local good guys from the Good Guy Collective presenting The Art of the Flow with the crowd dancing to the beats of DJ Earl Grae and the rapping of a changing group of artists. The night was not over, but the musical terrain had already been quite expansive.

What should follow but surf music, right? Did you know Knoxville has a surf band (or two)? The Appalachian Surf Team kept the fun flowing with a sound at once both retro and contemporary. The set list included songs associate with surf music and some bent and twisted to fit the sound in a really good way.

After saying you miss out if you arrive late, it’s probably hypocritical of me to admit I left early, but even an Urban Guy has to sleep sometime and I knew the weekend would be long and sleep hours short with the photo editing that would follow, so I cut out before Evil Twin. I probably missed something exceptional with front man Rus Harper always delivering the excellently unexpected in his various incarnations.

Jay Clark, one of the area’s best songwriters and vocalists, also just happens to hold a Ph.D. in Wildlife Ecology and had a recent run for state representative from the eighth district. (His comment: I ain’t gonna lie, we had our ass handed to us.) The set was great and striking to me because he played an entire set of songs I don’t have on itunes and I have a lot of his music. He really is one of the very finest songwriters you’ll ever want to hear.

The Barstool Romeos, one of my very favorite bands, took the stage next, continuing with a little bit of a country bent to start the final night. Their honkytonk sound is well known to Knoxville audiences and the vocals of front men Andy Pirkle and Mike McGill, punctuated by the lead guitar work of Po Hannah make a sound that isn’t replicated by any other. I always leave their shows wondering why they aren’t on the Grand Ole Opry and on country music radio, though they are probably too real for the later.

Last year’s WUTK, UT Battle of the Bands winners Gag Me took the stage next for their girl band/punk/new wave entry to the night. The crowd started dancing at this point responding to the infectious energy coming from the stage. They were followed by Tim and Susan Lee in their Bark incarnation and it’s always fun to hear the duo in any configuration. They are also a critical part of the Knoxville music ecosystem.

The final band scheduled to play the night was Temp Job with their potent blend of punk, funk and dance music. Dancers filled the floor and fun abounded in every direction. It was the perfect energy to end a good artist line-up. I think I have it straight that one of the members hosts “Soul Power” on WUTK each Sunday evening. That’s one of my favorite radio shows, so that was fun.

The night ended with recognition of the organizers and of Wayne Bledsoe and all he means to the music community, plus a little birthday celebration as it was his birthday. The stage then filled with a allstars from the bands who played this year’s festival, as well as some friends, for a musical tribute to Aretha Franklin that was over-the-top awesome. The finales are always good, but this tribute to Aretha was amazing.

So, if you missed it, mark it on your calendar for next year’s tenth anniversary edition. It’s the best one-stop shop for learning about local music and musicians and discovering artists you want to hear more from. As always, I have far more photographs than I can share in an article, so I’ll  be posting nearly 200 to the Inside of Knoxville Facebook Page later this evening.