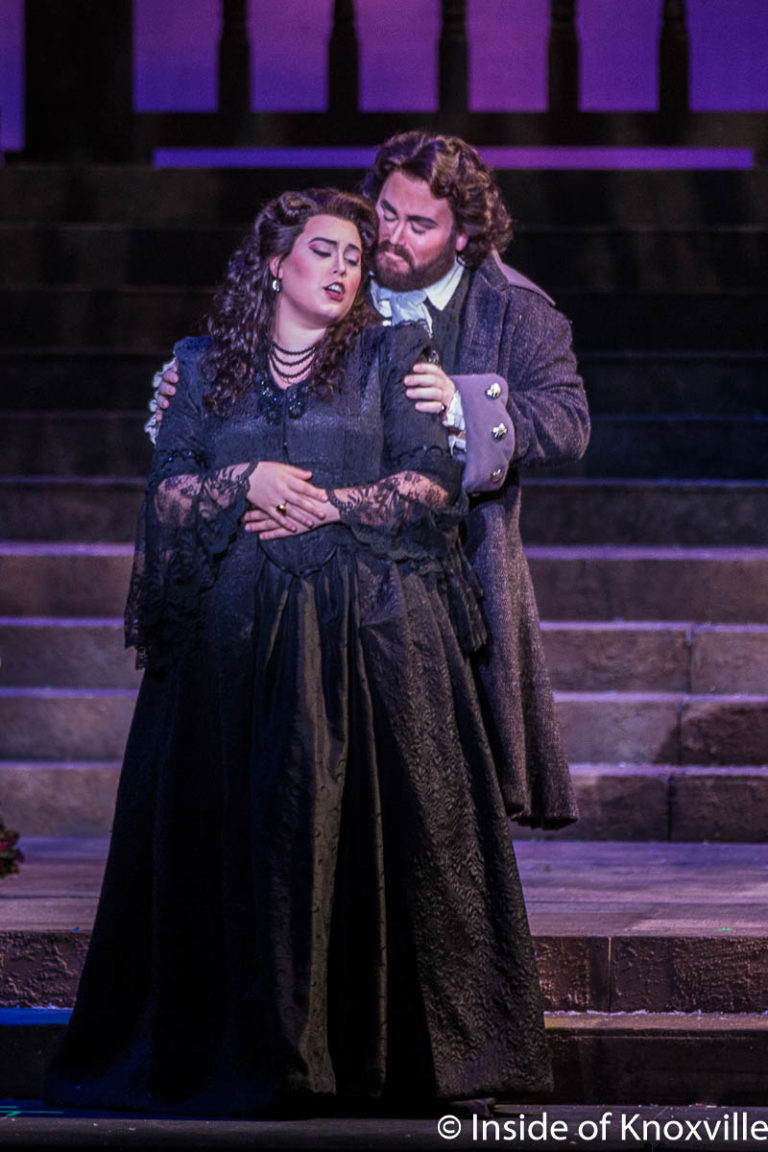 This weekend (Friday, 7:30 PM, Sunday, 2:30 PM) Knoxville Opera presents Lucia Di Lammermoor at the Tennessee Theatre. It is the second production in their 2018 – 2019 season and features Brian Salesky as Music Director and Conductor, Brian Deedrick as Stage Director and John Horner as Lighting Designer. The intermission at each performance of the dramatic love story will feature renewals of the vows for couples who have made advanced arrangements to do so.

The opera debuted in Italy in 1835 and is presented in Italian (with English subtitles). With music written by Gaetano Donizetti and words (libretto) written by Salvadore Cammarano, it is loosely based on a novel, The Bride of Lammermoor, written by Sir Walter Scott. Interestingly, the novel inspired additional musical works beyond this opera.

The story focuses on Lucy Ashton (Lucia, played by Meryl Dominguez) and her forbidden desire to be with Edgardo (played by Aaron Short) of the hereditary enemy. Her brother, Enrico (Michael Adams) forbids the union and demands that she marry Arturo (Chrstopher Plaas) which will form a union that preserves his empire. The results of his demands are bloody and tragic. It’s a little Romeo and Juliet with a bit more mental illness and an extra dash of bloodiness.

The opera debuted in Naples, was then presented in London and Paris, first being presented in the United States in New Orleans. While it was heralded at its openings, it was slow to take its place among the most performed operas, though it eventually became established among the pantheon. It was “never absent for more than a year,” from the Metropolitan Opera for most of the last century.

As always, the performance presented in Knoxville features something to appeal to most opera goers. Excellent vocals, lighting, sets and costumes offer something for everyone. Members of the Knoxville Symphony Orchestra provide excellent accompaniment, offering concert goers an orchestral performance worth the price of admission in itself.

Meryl Dominguez is from Brooklyn, New York and has been a featured vocalist with a number of U.S. opera companies and orchestras. Aaron Short, from St. Louis, Missouri, has also been featured widely across the U.S. and internationally by Lyric Opera Studio Weimar. Michael Adams has numerous national and international credits and is from Fort Worth, Texas. The trio and the entire cast offer a strong vocal counterpart to the orchestra. Biographical sketches of the other leads may be found here.

If you’d like to give the opera a try, check out Beth Evan’s primer, “What’s Opera, Knox?” You can purchase tickets here.