Violins of Hope Offers a Somber Glimpse of the Past, A Testament to Human Resilience 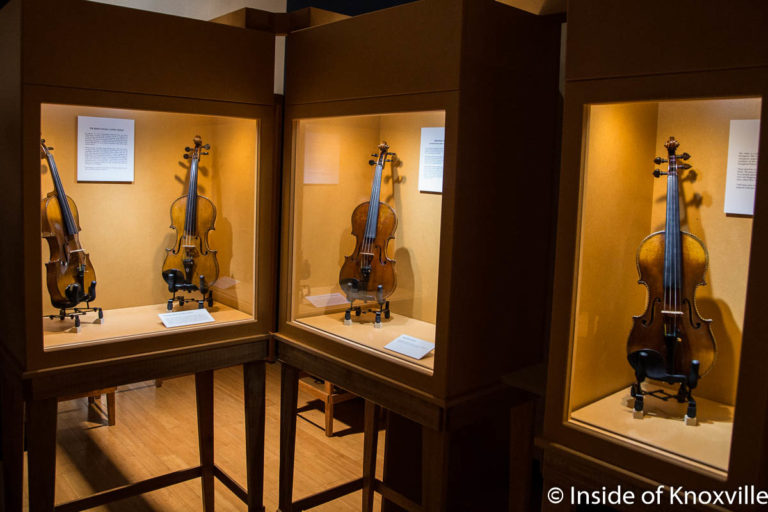 I rarely write about specific gallery exhibitions. I was moved to do so for Violins of Hope, the most recent exhibition at the UT Downtown Gallery after attending the ribbon cutting and opening ceremony last Friday. Mayor Rogero offered opening remarks and current Knoxville Poet Laureate Marilyn Kallet read a poem written for the occasion. Avshi Weinstein, the grandson of the original owner of the collection traveled from Israel to speak and architect Louis Emmanuel Gauci who designed the exhibit shared the thoughts that informed the planning and design.

The room was packed and silent as Avshi told the story of his grandparent’s escape from the holocaust and their arrival in Israel where they subsequently learned that as many as four hundred relatives had been killed by the Germans. A violinist, Avshi’s grandfather, Moshi, turned to making violins to provide for his family in the new country.

As Jewish immigrants arrived from Europe to the newly formed country, they wanted nothing to do with anything from Germany and they began to sell their German-made violins to Moshe Weinstein. He learned the stories and realized some of the violins had been played in the camps. Others had been hidden and the owners silenced forever in the camps. He knew he had to keep the violins, but he could not bring himself to restore them.

His son, Amon Weinstein was the one to begin that process in the 1990s. The collection now includes over 70 violins, many of which have been restored to playing condition. Knoxville is now host to the largest collection (37) to be displayed at one exhibition. To be in the presence of the violins is to experience the stories of those who held them, saved them and restored them as a way to return the voices of those whose voices were taken away. You can get a sample of the stories here.

Avshi is intent on spreading the stories of those who once held the violins as well as the message of the perseverance of the human spirit that it took to ensure the survival of these musical instruments. Hate silenced the violinists, but the violins and music survived. Avshi will be in Knoxville much of the month of January and has thirty different school groups with whom he will share the story.

Architect Louis Emmanuel Gauci, who has designed numerous exhibitions and entire museums, including the Museum for the American Indian for the Smithsonian, designed the current exhibit. Mr. Gauci, a Knoxville resident for the last two years, said he wanted it to be an intimate experience and it is, as the entire exhibit is enclosed in a carefully crafted space. The space measures precisely the size of the cattle cars used to send members of the Jewish community to the concentration camps.

Giving voice to the violins is the point of the existence of the collection and they will find their voice in Knoxville at the hands of members of the Knoxville Symphony Orchestra. As the exhibition closes, concerts at the Tennessee Theatre on January 23 and 24 will feature the instruments that survived the holocaust. The events will be hosted by Hallerin Hill and promise to be powerful affirmations to the power of hope and survival.