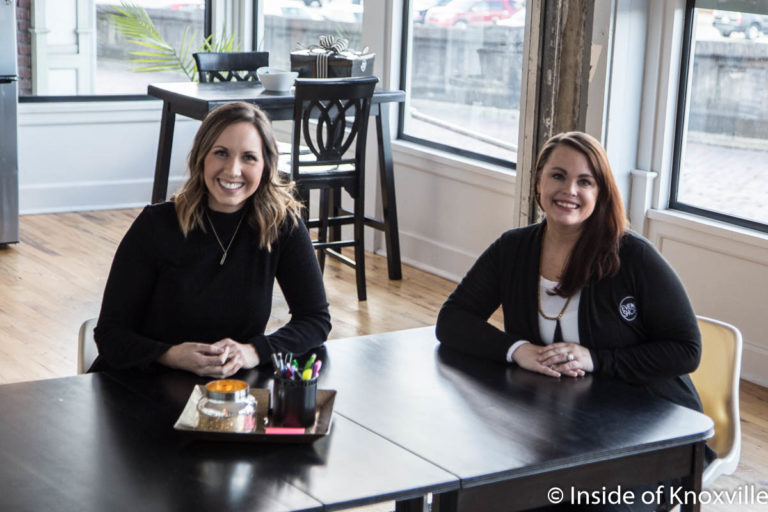 When Event Shop opened on Jackson Avenue last year, it seemed an unlikely spot for the new business. The Jackson Avenue viaduct outside the address is set to be demolished, rendering the address less than ideal without a very long ladder. It might seem just as unlikely that Holly Holloway and Brooke Carper, two young women with psychology degrees, would own an event planning company. If you follow their story, it all makes perfect sense.

Holly was born in Knoxville, but grew up in Nashville where her father was a mechanical engineer who later became a hospitalist. She worked for Puckett’s Restaurant and Grocery, working at their events, giving her a early exposure to the event planning world. She attended Lee University where she earned her psychology degree. She considered mission work and lived in Haiti for several months before deciding to go in a different direction.

In 2013 she moved to Knoxville where most of her family was living. She worked at the Clinique counter while considering options and found herself planning, organizing and hosting events for friends. She got a part time job at Above the Rest and it became clear to her that she enjoyed and had a talent for the events field. During this time she planned a gala for a UT group and the Love UT event. It helped her realize she wanted to be involved from the planning through the execution. She moved back to Nashville long enough to get her certificate in Meeting and Event Planning from Belmont University.

Realizing she enjoyed corporate events particularly, she returned to Knoxville and began work as the Events Manager for the Knoxville Chamber of Commerce starting in 2014. She worked with them for nearly five years planning hundreds of events. She began wanting to operate her own business. A chance conversation at a bad concert in the fall of 2017 led her and Brooke to form Event Shop in the spring of 2018.

Brooke was born and raised in Knoxville, attending Central High School and U.T. Her grandparents, Arnold and Linda Cohen, took her to many events as she was growing up and it was something that seemed natural to her. She graduated high school early in 2000, got dual degrees from UT in psychology and communication studies and worked at WUTK. Her work at the radio station she says was the “highlight of my college career.”

She also worked at All Occasions Party Rentals and “realized that I enjoyed the nuts and bolts rather than the pretty parts of events.” After eight months with them she went to work with Aramark on UT campus. She did catering sales, planning and logistics for the Chancellor’s office and the athletic department. She coordinated sky boxes in Neyland Stadium and basketball suites in Thompson Boling Arena. She says the job taught her a lot about “catering logistics, food production and top-level client experiences.”

After three years there she worked for the Holiday Inn at the World’s Fair Park as Director of Catering handling the challenge of hosting events while the hotel was undergoing a major update. She worked in group sales and coordinated with Visit Knoxville and the Knoxville Convention Center and learned how all the parts fit together.

She returned to UT for a year working with admissions and planning ninety-three events across the country during that year. She then began working from home and traveling for Destination Management Company out of Washington, D.C. She planned and executed events for clients nationwide, including a number of professional associations. She worked a number of government events in Washington, D.C. and “learned things I couldn’t learn in a smaller market.”

Brooke and Holly met at a Knoxville Special Events Society gathering at Prestige Tuxedo. (Brooke’s husband, Nathan, is Director of Sales for Prestige Cleaners.) It was several years later that a group of couples went to that fateful concert at the Mill and Mine. (Holly’s husband, Andrew, works with Mill and Mine.) Holly had begun putting feelers out about starting a company. She’d began wanting to work for herself, though she says it was hard to leave a good job with great benefits.

Brooke heard that Holly was interested in forming a company and the idea intrigued her. She approached Holly that night and the talks that led to the company began. The two continued to work their jobs. Brooke brought Holly on as a contract employ for an event in Austin and the two felt they could work together very comfortably.

The two say they are very fortunate because of their previous work to have a ready-made network and recommendations for jobs. They offer high quality, national-level planning services to corporations, non-profit groups and others. They feel the fact that they come as a team offers more quality and they enjoy becoming part of a larger team with their clients. For many organizations with one or two large events a year, their services can fill a void without the company having to employ a full-time events person.

Not every situation is the same and they are able to comfortably do events from beginning to the end, come in for a component of the event or serve as consultants. They also offer attending events and consulting afterwards to help organizations improve their events going forward, looking at brand and guest experiences.

They’ve worked with a number of local groups already, including Positively Living, Dogwood Arts, Discovery, the Change Center, Anderson County Chamber of Commerce, Joe Hollingsworth, Jr. and the Hollingsworth Foundation and Loghaven Artist Community. They continue to look for companies that are a good fit for their services.

And they’ve already expanded. In January they launched Epiphany Weddings and Designs to focus on weddings and wedding related events and they hired a wedding planner and they’ve established vendors for everything an event might need, like lanyards, t-shirts and other branded promotional items. They intend to expand to a “shop of planners,” with individuals to focus on the various areas including marketing and media, design, logistics, operations and production. They hope to work with UT to bring students aboard and help them develop.

They have one national client and want to add slightly to this portion of their portfolio. They hope to assist with city-wide events as planners do in major markets. They note that, in addition to the great support provided by their husbands, the Propel program at the Chamber of Commerce and Doug Minter specifically have been very helpful. They’ve assisted in helping evaluate next steps, how to operate a business as opposed to being an employee and how to be an effective partner in a business.

While they follow the motto of Plan Big, Play Big, they are doing so out of what they understand is not a permanent space. They approached David Dewhirst about the spot, knowing it would not last. They will continue looking for a permanent downtown home while they wait for a definite date for the viaduct construction to begin.

They are working with Dogwood Arts to provide logistics to the House and Garden Show which starts today and they are about to leave town for a nine day event they’ve planned in Los Angeles. They plan to be forward-thinking, bringing to Knoxville in real time what is trending nationally in the events industry. “We can make that happen in Knoxville, Tennessee.”