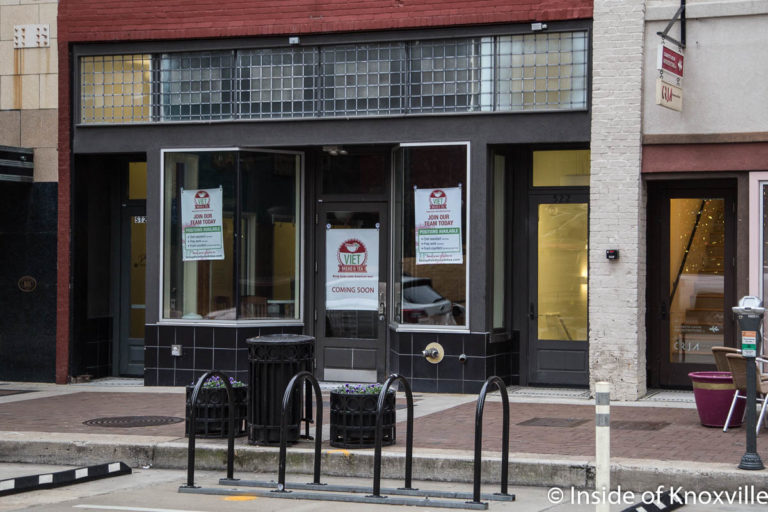 Starting with the moment a small sign was posted in the window of the former location of Potbelly sandwich shop at 522 South Gay Street, speculation and curiosity has been strong regarding who was bringing Vietnamese food to Gay Street. Details have been scarce as anticipation was expressed on social media. Now we have a few answers.

I met with delightful Viet Bread and Tea owner Rosie Nguyen inside the location to talk about her plans. She got off to a very good start: She brought me food. The egg rolls were among the best I’ve ever eaten. It included ground pork, an Asian potato, black mushrooms, shredded carrots and Rosie’s secret seasoning. If I understood her correctly, it also includes some sort of cocoa. She detailed how it needed to retain some crunch, but must be moist. She has her methods to make it just so, and it was.

The milk tea was also delicious. She will have a wide range of teas and toppings, including bubble tea. She was quick to tell me that her tea will be fresh-brewed every day and will not be from a powder. In fact, she says everything from egg rolls to tea to pho will be made from scratch.

It was a bit harder to convince her it was not immodest to talk about herself in an interview. She slowly began to tell her story, which started in Saigon where she was born and grew up. She finished college there, majoring in education. She came to the United States on a student visa with the intention of becoming a nurse, moving to Atlanta. She took the prerequisites, but life intervened.

She had married and had children (they are now in 4th, 6th and 8th grade at Sacred Heart) and opened a nail salon, which she co-owned with her (then) husband. He decided to shift his attention from the nail salon and it fell to her to manage a large business with fifteen employees. The couple eventually divorced and she sold the salon.

She was dissatisfied with public schools in Atlanta feeling that she was working hard for her children’s futures and they weren’t necessarily moving toward the future she wanted for them. Her best friend lived in Knoxville and described Knoxville as “quiet, but not too small.” Rosie had visited and felt it would be a better place for her children.

She moved to Knoxville last June and worked in her friend’s nail salon, but she no longer felt a passion for that work and missed owning and operating her own business. Thinking of opening a Bubble Tea shop, she began looking for a location. She looked at the location which later became Eddie’s Health Shoppe on Union and was helped by Mary Ellen who works with Tim Zitzman at that location, to find the location on Gay Street which she has chosen. Given the location, she decided to shift from bubble tea to a full restaurant concept. She mentioned how helpful Bruce Duncan, VP of Suntrust, has been in getting paperwork filed for her LLC.

Her culinary background is primarily related to family. Her mother and sister own a tea shop in Vietnam and she says her mother’s sister is a great cook from whom she learned. Drawing from family, she plans to bring genuine Vietnamese food to Knoxville. While she plans to make it real, she also feels she understands American tastes and what people here might find more appealing. Some of the more extreme Asian spices and foods she says she’ll leave until later.

A feature of the restaurant will be the teas. In addition to the milk tea which I enjoyed, she’ll have flavored teas, as well as smoothies. Toppings will be available for the teas and she’ll have sodas for those who don’t want the tea. She describes the teas as a blend of a dessert and a beverage.

The food will include the popular pho with chicken or beef. A focus on the menu will be buns (sandwiches) and she’ll feature seven or eight at any given time, including grilled beef, pork and chicken. There will also be a “special banh mi,” which will have a pate spread, which orgininated from the French baguette style. There will also be a meatball in tomato sauce sandwich and she’ll also have a crispy tofu for those who prefer not to eat meet. The bread for the sandwiches will be provided fresh daily by Flourhead Bakery. Rosie said that Mahastie Vafaie has been very patient in helping her get the baguettes just like she wanted them for the sandwiches, making repeated attempts to get it just right.

In addition, there will be a large rice/vermicelli bowl with optional toppings to include beef, barbecue pork or chicken. All items on the menu should go for well under $10. She’ll also feature those delicious egg rolls. She’s considering whether to offer alcohol, but should she do so, it will be at a later date.

Johnson Architecture and Kelly Hicks have developed the plans which were complicated by the limited kitchen space and the restricted options for a hood. They’ve sorted all that out and ordered the hood, but the process took more time than she’d anticipated. Chris Robinson will do the minor construction involved in getting set up. She’ll be doing the decor which she said will be very Asian and will involve Vietnamese hats (nón lá  or leaf hats)suspended from the ceiling. She also wants it to reflect her personality and simply to be fun.

She admits to being a little OCD and says she will have high expectations for how her kitchen runs and how her customers experience the restaurant. “I want it to be the best for the customer, in treatment and food. When a customer comes here I want them to enjoy the food, but also experience a welcoming and friendly restaurant with reasonable prices and things done right. I want customers to enjoy the food, leave happy, and return.”

Her target date for opening is February 7 and her initial plans are to open from 11:00 AM to 9:00 PM every day except Sunday, when she’ll close to spend time with her family. She says she may change the hours or open on Sunday as her staff is filled and she gauges demand. She also hopes to have outdoor seating in the future.