What’s That Glitter at the Keener Building? Glitterville Studios Move to Knoxville! 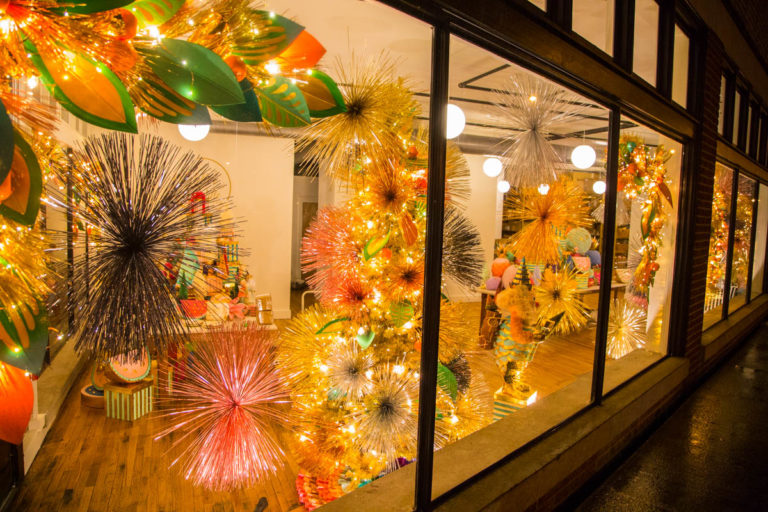 Development brings new spaces and new life to old spaces. But sometimes the result can be small absences. Missing pieces of the texture that once enriched our lives in small or large ways. One such absence was the closure of Keener Lighting on Broadway.

The development of Keener Lofts is great and the building is, no doubt, better utilized. But there were those beautiful lights in the window, luminous bits of cheer in the night along a stretch of road that sometimes found cheer in short supply.

But now, that glow has returned and lights the night in an even more magical manner. A glimpse through the windows reveal all the colors of the rainbow, tinsel, elves, presents, toys and more. Is it Santa’s workshop? No, Urban Boy has that pegged for the top of the Sunsphere. A beautiful Christmas display? No.

It’s Glitterville Studios, an online company offering shiny, whimsical products in, “colors for every palette.” They offer lots of ornaments perfect for this time of year, but they also have a set of vases, garland and wands. Yes, wands. Trees to build a rainbow forest? Check. Actual glitter, mugs, salt and pepper shakers. Check, check and check. Tiaras, crowns and candles . . . well, you get the idea.

And there’s lots more. There’s even a collection of Oprah’s favorites. And if all this leaves you feeling inspired, there are books offered for sale on how to handcraft your own decorations for Christmas or Halloween. So where did this come from and why does an online company occupy this space?

I was put in touch with Stephen Brown, owner of the company which is, as he says, “where every day is a holiday!” His bio suggests that as a child, he found himself with the “post-holiday doldrums” and began making crafts for the next holiday in order to keep the joy humming. It turns out, that happened in his hometown of Rockwood, Tennessee. He attended UT where he got a degree in Costume Design

After graduation, he worked in New York as a costume designer for television movies before launching his “line of gift ware and holiday decor.” He tells me he was on the set working with Mariah Carey when he needed a distraction and began making ornaments in his down time. Everyone noticed and raved about the ornaments and told him about a market in Atlanta where he could present his goods in hope of being noticed by the buyers, magazines and others present.

He got a 10X10 booth and was cautioned not to expect too much, that lighting didn’t generally strike. Within the first hour Town and Country magazine and others were offering spreads. A company named Department 56 (they make those Dickensian villages we all have seen) told him they could make him worldwide. He worked with them for three years and did very well.

After leaving the company, he settled back in to Rockwood, making ornaments just like he had before and marketing them when the person who had first contacted him about Department 56, but had retired just after that contact, reached out to him again and suggested that they build a large company of his own. He was in Hong Kong the next week and started 180°, which has become an international wholesaler.

He co-founded the Glitterville in 2003 with Bryan Wilkerson who had a position in the art department at a local college. After three years, Wilkerson left the company and Bryan Crabtree joined the company in 2008. Initially hired as a photographer, his role expanded greatly and he continues to photograph for blogs and catalogs, but also coordinates with manufacturers and travels with Stephen to develop new products. The company is his smaller boutique outlet

The process is interesting and hasn’t strayed from its roots in Stephen’s childhood. He makes an original piece personally for most of the products, and travels to “Asia and Europe to work with local artisans who reproduce his designs using the same techniques he used to create the original.” It’s time intensive, for sure, but it offers a measure of quality control he would not have otherwise.

All of this and his previous work in New York City has led to continuing to work with Mariah Carey, Tori Spelling and numerous other celebrities. He is friends with and does all the magazine covers for Oprah. He designs much of the Christmas graphics, design and presentation for Anthropoligie’s Christmas marketing each year. On a more local note, he designed the set and costumes for Clarence Brown’s recent production of “The Santaland Diaries.”

All the while, he’s never really had a design space and he’s never operated a retail location for Glitterville. Essentially, he still worked from the kitchen table in Rockwood. Then he noticed the Keener Building was being renovated, he inquired and grabbed the space. He remembers those Keener lights from when he was a child and said, “I have always loved the Keener building and we are beyond thrilled to be moving our studio to downtown Knoxville.”

He confesses he hasn’t been able to spend much time at the new studio. “I decorated the windows for HGTV” and left town. He called me on his New York phone from Dallas where he has a showroom for buyers. He also has showrooms in Atlanta and L.A. “While it will be used primarily as a design studio, we will also be opening a retail store there later this year.”

He says he will be here more in February and hopes to have the retail portion open in the spring and has plans to assume a larger space in the building as it becomes available. He’ll keep the showroom small for that “Disney effect.” You’ll also get to meet his famous chicken. That would be DollyPoulet, a gift fom Tori Spelling, who will be wandering about the showroom. “She’s the sweetest chicken in the world.

He also plans to offer craft classes for children and advanced craft classes for adults as he gets moving and he’s excited to have his first retail outlet in downtown Knoxville. Glitterville is on Facebook and has a website. Definitely check them out, but he says the best way to keep up with him is on Instagram. His 42,000 followers agree. Check it out and welcome him to downtown.