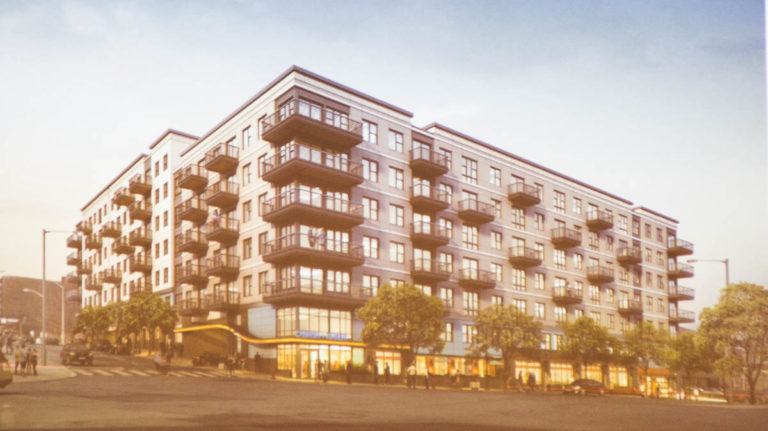 Redevelopment of the Supreme Court Site has been a long process before ground is even broken. One round of requests for proposals resulted in awarding of the contract to a group that was unable to deliver. A second round awarded the contract to Dover Development group and partners. I reported on that proposal over a year-and-a-half ago.

Over the course of the next year, significant changes were made to the design, including height and number of rooms for each component. More downtown hotels were developed, hotel acquisitions led to a limit on flags available and the city removed their request for public parking. The result was presented last May and is shown in the illustration below.

A week ago a presentation was made to the Downtown Design Review Board and the modifications continue, though the changes aren’t as significant. For working purposes, the site has been divided into two portions, with one being a boutique hotel and the other being devoted to apartments. The intent would be for the city to consider these separate parcels. The presentation focused on the apartment portion of the development.

The current proposal has not changed the number of apartments included, which sits at 230 market-rate apartments, plus amenities and a garage for self-parking. The developers, Bristol Development is doing this portion, said it will “not be student oriented.”

They, along with J Davis Architects and DIA, have responded to the city’s request to focus on bringing life to Henley Street. The result is building amenities are facing Henley and are exposed to Henley. At the corner of Cumberland and Henley, a bike shop/work space will have garage doors opening to Henley. From that moving down Henley toward Church will be a workout facility with exposure to the street.

On the corner of Church and Henley will be a two-story glass lobby including a coffee shop/Co-working space which will be open to the public. This side of the building will also include enough space between the building and Henley (20 feet) to provide the opportunity to plant trees and have a small patio outside the coffee shop. Balconies are planned for both the Henley and Church sides of the building.

Entrance to and exit from the garage has been moved to Church Street and discussions continue regarding the possibility of having public art along that wall. The unit at the corner of Church and Locust will be residential initially, but has been designed so that it might be shifted to retail if that becomes an option.

The developers indicated they had looked for and found no retail interest on that corner and they had focused their retail efforts on Henley Street as requested by the city. They also noted that they’ve done the same thing elsewhere and have had some of the units convert to retail. The eastern side of the building, along Locust would have elevated stoops for on-street residential units. This replaces a previous plan for an access to the garage on that side.

While the hotel was not discussed in great detail in this presentation, the statement was made that the two projects will proceed simultaneously. Parking was discussed and there will be a two-level garage for the apartments and a small parking area will remain on the corner of Locust and Cumberland to serve offices that will be located in the building behind the old courthouse. That lot will be accessed from Cumberland.

The group suggested they want some sort of changing art along Church and that they want the result to be a collaborative effort with local arts organizations. They also made the point that this is the tightest parking ratio they are doing anywhere and that it may  be the largest private investment in a single project in modern downtown history.