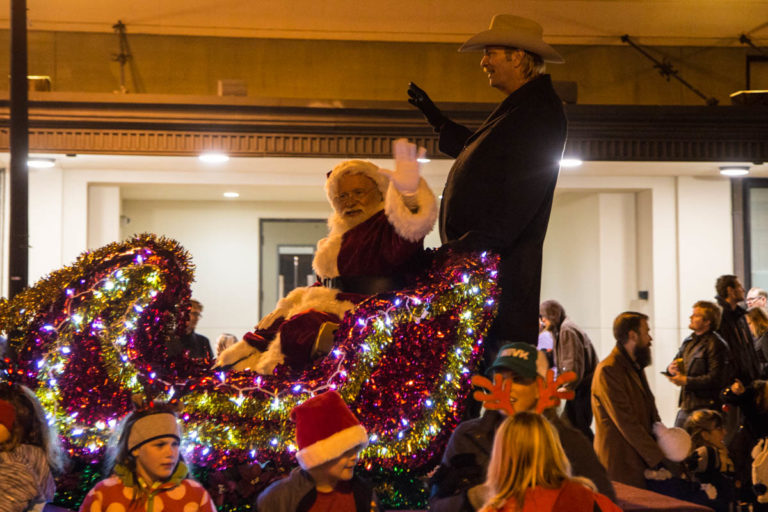 Let’s keep going with part two of the Christmas parade. If you missed the first part, you’ll find it here. When last we tuned in, the Bruster’s van had rumbled by and lighted up the night with its shiny self. Next it was on to more vehicles with lights. While I don’t mind a few tractors, cars and such, it gets a little old unless they’ve done something spectacular or at least unique.

I definitely give a pass to the Salvation Army with their pot on top. Someone needs to be up there ringing a bell, however, and don’t you think people might have donated if volunteers with buckets walked alongside? Not that I’m advocating fundraising in the parade, but that is such a Christmas tradition, it might not be a bad exception to make.

I absolutely loved the Halls High Madrigals, which made the second choral group. As I said in the last article, it’s a nice break from the bands. In this case, it’s another Christmas tradition we can get behind and I’m not sure how many people actually encounter madrigal singers these days.

The city’s float looked good, as always, and it’s nice to see them participating. More floats followed continuing the trend for the year. I particularly like the laughing Santa and the train that that truck pulled. That’s a nice job of incorporating the vehicle beyond simple string lights: bonus points.

The Hard Knox Roller Girls always brighten any event and it was fun for all of us watching them do their thing. Another Rusty Wallace float followed and it was excellent, as well. I hope the Rusty Wallace involvement wasn’t just a one-year blip, or we could be back to sad. Don’t go back to sad.

The Grinch was cool. The kids dug it, but check out that little girl looking up at him in the photo, as if to say, “You are pretty cool, but if you come one inch closer, I am out of here.” More cool floats and a snow machine: Double bonus! Mulls TV had a float which was kind of fun. I didn’t know that was still a thing. You have to be old school Knoxville to remember the Mull Singing Convention, “Right, Lady Mull?” It claims to be the longest-running locally produced television show in the country.

Cedar Springs delivered a good nativity scene. The Morristown Band looked super sharp with my favorite uniforms of the night. The Chick-Fil-a cows followed and the kids in our group were delighted. ORNL had another of the Cline’s Floats and it was very nice (thank you, Cline’s Floats!).

The Cruisin’ Cone truck may not have the most Christmas Bling, but both the truck and the driver had bling in the bank before the parade. In an event intended to dazzle, he put the daz in the zle. He was probably the favorite of the adults in the group for the entire parade.

A few more cute kid floats and nice looking floats was followed by the Dollywood Float which, like the Shoney’s Float used to be among the best, but on this night looked pretty normal. I’m just thinking Dollywood has the budget to blow off the roof, so why not do just that? Next year?

One Life Church always brings the rock band, just as often playing secular Christmas music as not and that’s what they played this year on a great looking float. Theirs is always one of the best and it held its own this year. It was followed by a truck which was followed by a couple of bizarre characters. Pretty scary, like the stuff of bad dreams or Fellini movies. Am I missing something? Are they from a strange children’s Christmas movie I’ve missed?

Pretty shortly afterward, came Saint Nick, hovered over by Gunner. Which has been in the Knoxville Christmas parade for more years? It could make a good trivia question. Santa was a very good version and Gunner was a pretty good version of himself. It was a good end to a considerably better and much longer parade. I hope it continues to get better while, perhaps, avoiding getting any longer.