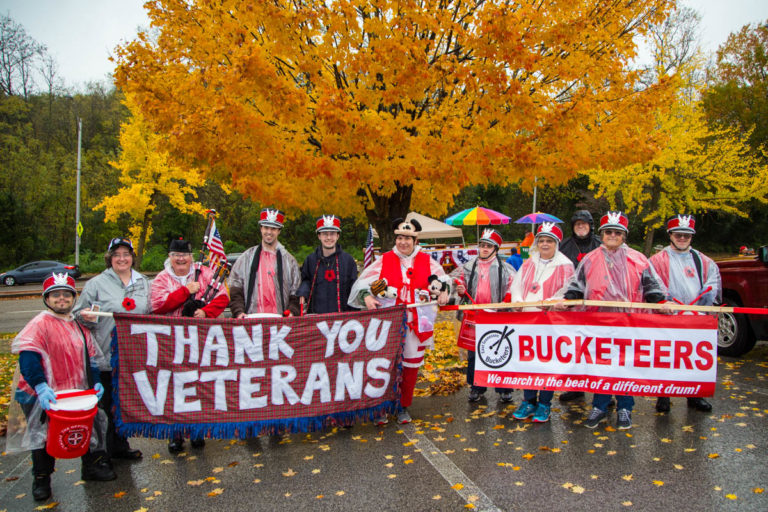 As I walked through the rain toward the spot where I was to rendezvous with the East Tennessee Bucketeers before the Veteran’s Day Parade, I heard the soundtrack from my youth and a surprising song coming from a truck where an aging veteran sat waiting out the rain. Perhaps a bit more than ironic, as I passed the truck, the unmistakable sounds of John Fogerty hit the central verse I know by heart:

They’ll send you down to war.

And when you ask them how much should we give?

I hesitated, but couldn’t help myself. I stopped and asked the guy about the music. He said he served in Vietnam in 1969, 1970 and 1971. He said Creedence Clearwater Revival was the soundtrack to his time there. I doubt that eighteen-year-old boy could have imagined his older self in a military parade nearly fifty years later playing those same songs.

As I approached the group I had agreed to meet, my contact, Katie Helms, was organizing her charges with her signature humor. With their signature hats and white buckets and, for this day, clear plastic ponchos, they were ready for business, rain or shine. And it was rain. Lots of rain. The rain kept many of the usually large crowd away, but not so the East Tennessee Bucketeers.

You may have seen them around town. They’re always in the Veteran’s Day Parade and they’ve performed in many others. Katie, who plays bagpipes in this group and at various events, first met Austin at church. He was drumming on the pews and she asked him if he’d like to play bucket drums with her bagpipes. She says she’s too ADD to play with a traditional pipes and drums group.

The two hit it off and soon began to meet friends and family of the members, many of whom participate in Special Oylmpics. John, another member, saw the group on Facebook. His family had moved from New York and his mother told me he loves to drum. She said he did an open mic in New York and said, “I’ve got a band.” They had to get him a gig in Knoxville and were glad when they found the group.

Katie says some people are born entertainers and this gives them a place to shine. They play at the Special Olympics each year, they played in the St. Patrick’s Day Parade and they’ll be playing in four Christmas parades this year, including the Knoxville Christmas Parade. They also perform at 5Ks and other races, encouraging the racers as they go. They’re accumulating nicknames and titles as they go, like Zoo Monster (watch for the stuffed animals and you’ll recognize her) and the Captain.

Katie said most of the crowds are very supportive of their “joyful noise,” but she remembered once that a person was rude from the crowd. Suspecting he’d had too much to drink, Katie launched into, “What Do You Do With a Drunken Sailor.” She figured no one knew the song, but her, but it gave her great satisfaction in any case.

They’ve played Cherokee Taverns and Camp Koinonia. They also play a monthly gig at Oak Ridge High School and she said they’d love to have other schools at which they might perform. They’re also always looking for people to join them in parades to help maintain a semblance of order and help prevent lost drummers along the way.

Austin summed all of it up the best, “We need more kind people in this world. There are a lot of rude people. We need more encouragers.” Well said.

I trotted back up to Gay Street and grabbed a coffee at the Tombras Cafe before the parade began. Small pockets of people had begun to gather, mostly under the various awnings along the way. The weather was unfortunate because the parade usually draws many thousands.

The Grand Marshall for this year’s parade was Madisonville’s U.S. Air Force Capt. Bill Robinson. Held captive for over seven years during Vietnam, he’s the “longest-held enlisted prisoner of war in American history.” Interestingly, for a time he was held alongside future Senator John McCain.

It’s an incredible sacrifice for his country and no person experiencing that deserves to be derided as a “loser,” particularly by those of us who do not know what it’s like to serve, fight and endure such an ordeal. It is an unfortunate reality that many of these soldiers returned to derision during a very divided time in our nation’s history. No one then could ever have imagined that derision coming from the highest office of the country that asked them to serve.

The parade itself proceeded as many have before, with a mix of fun and poignancy. A number of high school bands and ROTC groups marched, as did representatives of the various branches. Lots of various car and motorcycle groups were represented, along with a mix of military vehicles from different eras.

Veteran’s Day, officially falls on November 11 and coincides with Armistice Day (which it was originally called) and Remembrance Day celebrated in some other countries to commemorate the end of World War I. The federal holiday is on the following Monday (today), making this an excellent day to thank a veteran you know for their time spent defending the country.