The Power of a Visual Image to Produce Change 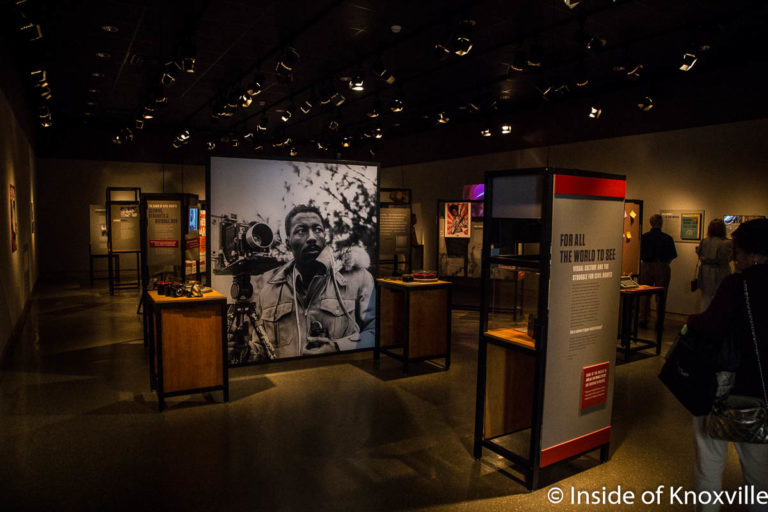 For All the World to See, UT McClung Museum Exhibition, Knoxville, September 2018

What’s in a photograph or a video beyond simple pleasure or entertainment? Is a photograph nothing more than a representation of the ordinary? What are the images that impact us? How does an image or footage seep into the public consciousness and when it does, can it produce real change?

Think about images that have shaped you or altered your thinking. The first that always comes to my mind is the image of the napalmed girl in Vietnam. Many feel it was an image that helped stop a war. Images can speak to us in ways we don’t understand – witness the 1985 photograph of Sharbat Gula, the Afghan girl with the haunting green eyes. Even consider some of the painful cell phone footage you’ve seen in recent years, documenting human behavior we’d prefer to think doesn’t exist.

More particularly, the current McClung Museum’s current exhibition, For All the World to See, focuses on the images of race and of the pre-civil rights and civil rights era that changed the minds of a nation. Many images of the era were seared into the minds of the nation: Emmit Til in an open casket, water cannons on black protesters in Birmingham, crossing the Petus Bridge, the March on Washington . . . the horrific photographs of lynchings.

If the camera was commonly understood to be the instrument that recorded newsworthy events, made them visible, more immediate, and even, in a sense, more real, rarely was it seen as a device powerful enough to alter the course of history. But for civil rights leaders and activists like Gordon Parks, the camera was, “the weapon of choice,” in the war against racism and segregation. Photographs supplied the visual arsenal capable of transforming public opinion, motivating political action, or bolstering morale. Civil rights leaders became exceptionally skillful image-makers, capitalizing on the authority of pictures to edify, educate and persuade.

Through compelling photographs, television and film clips, and other artifacts, For All the World to See, explores the role of visual culture in shaping and transforming the modern struggle for racial equality and justice.

The exhibition, which runs through October 20, includes a very wide spectrum of images about race or involving race. Not all are negative. How does a racially biased person see Michael Jackson in all his 1969 cuteness or Julia in the role of a professional on television and not begin to have a seed of question about their world view? When Mahalia Jackson sings, “Amazing Grace,” how can she not be seen as part of the family of God by Christians?

Granted, some of the images are disturbing and others are complicated. Archie Bunker talking to Sammy Davis, Jr. on the set of All in the Family might give one pause. From the aching eyes of the striking sanitation workers in Memphis, to posters proclaiming opportunity for all in America, only to show all white faces in a classroom, the exhibition is both an examination of the past via images, and a small explanation of how we came to the place we are today.

Accompanying the exhibition is a series of lectures, Sights of Power: Race and Visual Culture. The first was earlier this week, when Lindsey Stewart spoke on, Black Southern Feminism in Philosophy. Shelia Pree Bright, will speak at the museum at 5:30, Thursday, September 13. An Atlanta photographer, she has recently documented, “responses to police shootings,” in various cities across the country.

Herman Gray will conclude the speaker series on October 18 at 5:30 when he speaks on the topic, Transparency, Opacity, and the Black Subject(ion) of 20th Century American Television. Additionally, family activities are offered that engage children in the topic, meeting them on a more simple level.

It’s a topic worth exploring. None of these images caused the realities, tragic or uplifting, but without images, it becomes more difficult for experiences outside our own to seem real, to literally have a face. Sometimes the images make us uncomfortable. These might seem like relics of a bygone era. Sometimes discomfort is worth experiencing. Sometimes the past isn’t really that far away.