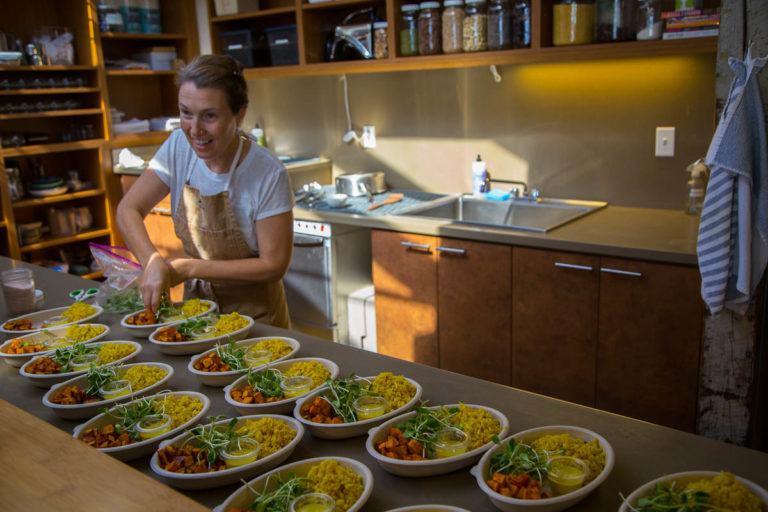 Cook to Be Well recently opened at 711 Irwin Street inside Glowing Body Yoga and Healing Arts. It’s a return to food service for the location, but also a logical next step for chef Jenna Baker who wants to serve up food that inspires and heals and is both healthy and delicious.

Her early years had a culinary bent, of sorts, as she grew up on a small northern Virginia farm, where her engineer father and school teacher mother started a vineyard. It became more than a hobby when her father retired to work the vineyard full-time.

She was known as a “picky eater,” which meant she didn’t like the kinds of processed foods the family often ate, such as stove-top stuffing and pot pies. She grew her own garden and “doctored up” the dishes commonly served in her family. She baked birthday cakes for friends. Her earliest memories are “food moments.”

Still, she went to school on a music scholarship, playing oboe, and intent on being a music teacher. Two years in, a friend said, “I get that you are going to be a music teacher, but you are going to be a chef when you grow up. That started a quest to find information as to how one became a chef.” With no Internet or Food Network to guide her, she read the cookbook bios of chefs and found the culinary schools they attended.

She settled on two: The Culinary Institute of America and Johnson and Wales. She called 1-800 numbers to make contact. Eventually, packets of information arrived via snail-mail and she presented the idea to her parents, uncertain how they might react. Her mother took her to see the schools and she chose the Culinary Institute of America who accepted her on the condition that she work in a restaurant for six months before beginning her studies. She worked in a German restaurant and began studies the following January.

When the time came for an internship, she chose the hardest placement, a hard-core restaurant in San Francisco, complete with yelling in the kitchen, served with a side of sexism. One afternoon she was told she was fired. Dejected, she went home to call her parents and ask for a plane ticket home. The phone rang and the chef asked, “Where are you?” and told her to get back to work. She worked fifteen hour days, six days a week for five months before returning to graduate from culinary school.

She worked at The Inn at Little Washington, an upscale dining restaurant just outside of Washington, DC and close to her parent’s farm. She learned attention to detail and was introduced to the, “farm-to-table,” concept before it got to be a buzz word. She met some of the country’s best chefs there and re-started her garden, supplying the restaurant with some of their vegetables.

She married, took time to raise children, and worked as a pastry consultant. She worked some early-morning pastry shifts as needed and baked wedding cakes. As her children entered school, she realized the major shortcomings of school food and became involved in lunch politics.

The Catholic school was serving frozen dinners and parents were complaining. She volunteered to make it better and began making basic food from scratch that children would eat. She got a steamer donated (the kitchen equipment was geared toward heating frozen dinners) and cooked broccoli, greens and more. “You can cook from scratch and kids will eat it. I thought we had just lost the art of cooking. I didn’t realize how political it was.” She kept it up for six years. Participation was high, but she was burned out.

She decided to make change at a grassroots level. She began work at First Descents, a non-profit serving young adults who have cancer. They provided outdoor experiences and she volunteered to help with food. She worked as a contract chef for three years before being hired to manage the program, which she did for two years.

Meanwhile, her own health began to suffer from personal and professional stress. Rather than take medication, she decided to develop a therapeutic diet. “I was surprised how difficult it was to rethink how I cook.” She went through yoga teacher training and, given its wellness bent, people began asking for nutrition help. She liked the role given that “a lot of people start to look at their diet when they are ill. I healed myself without pharmaceuticals.”

With First Descents she’d developed meals that were plant based, while trying to keep it familiar. She focused on whole, non-refined foods. Meat was available with some dishes, but she challenged her clients to try vegetarian.

I thought I wanted to do education, but people wanted it cooked for them. I realized that that providing nourishing food can be a catalyst for change. We outsource our food. The food industry is geared more toward entertainment than nourishment. Food needs to be beautiful and to taste good, but it needs to be affordable and nourishing.

And so, Cook to Be Well was born. She began looking for a commissary kitchen to use, but could not find one that worked. She was at a dead end. She’d previously given incorrect contact info to Kim at Glowing Body and Kim was trying to reach her to teach a cooking class. The two ran into each other when Jenna came in for a class.

Kim showed her the space where a kitchen had once been and Jenna offered to help clean it out (it had become storage). Hearing that Jenna’s last hope for a kitchen had fallen through, Kim offered her the space. Jenna got a tax refund and used the money to purchase a second-hand refrigerator, oven and sink and opened a few weeks later.

She started selling her prepared foods – just pick up and heat (or eat cold!) in June, hoping to target students of the studio. Within a month, most of the business was from non-students who heard about it in the community and wanted to try it for themselves. She’s done very little marketing other than posting Instagram photos and she’s already needing to hire an employee.

Her primary offering is a Buddha Bowl, which is simply a bowl of food, generally, with three healthy ingredients. Urban Woman and I had two delicious bowls which included roasted sweet potatoes, chickpea salad and sunflower sprouts. Bowls typically include a grain, a vegetable and sauce. She also offers a “handheld” with similarly healthy ingredients.

She also offers sauces under the name, “Just Add Plants.” They are clean and flavorful and can be simple. “Most of my bowls are just high quality vegetables. There is great, diverse agriculture in Knoxville, many farmers’ markets, CSAs. I hope to teach some skills. I am a professional chef and I understand others aren’t.”

She’s got lots of plans going forward, including a Food Box which would include a week of prepared meals in the form of the ingredients to make Buddha Bowls. She also wants to provide workshops on healthy cooking. “There has been a cost to our health because of how our food has evolved. A good diet can heal. It is empowering and humbling. Short of having a personal chef, there has to be some balance of how to get healthy food, easily. I hope it inspires.” She’s got plans for soups and you might occasionally see sweets when her inner pastry chef just has to come out.

The business at 711 Irwin, inside Glowing Body, is open 7:00 AM – 3:00 PM, Monday through Saturday. Whenever the studio is open you can stop in and see if there are bowls left in the cooler. Purchases after-hours are cash only, on the honor system. But don’t wait too long, because she’s been selling out early many days. You can find Cook to Be Well on Facebook and Instagram.