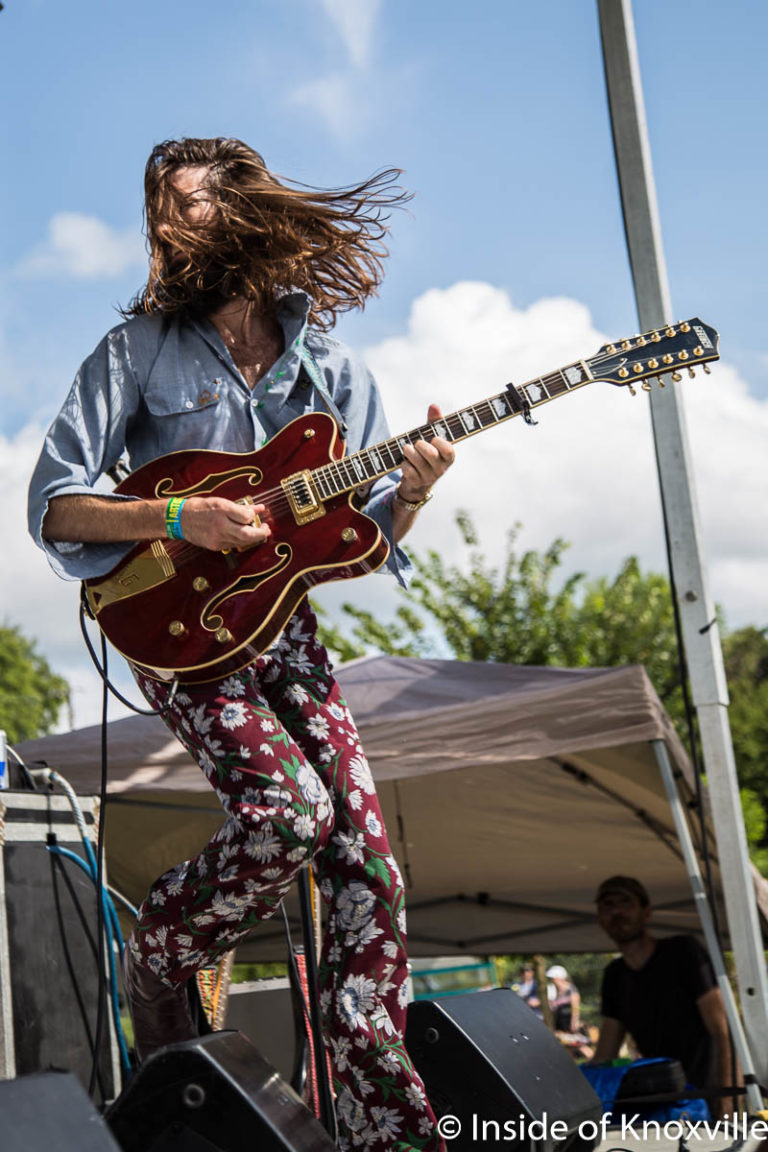 Any new idea or first time venture brings potential pitfalls. If that venture is an outdoor festival, it brings the risk of bad weather or other potential issues that could derail the entire event. While bad weather did threaten (forecasts were for 90% chance of rain, with over an inch expected), Second Bell Festival went off beautifully.

There were a couple of showers, a little heat mixed in for a while and it ended twenty minutes early because of lightning in the distance, but in between were long periods of great cloud cover to go with the music. And beside, when it rained, the crowd danced, when it was hot, the crowd got some cool drinks. The phenomenal music kept the back-beat of the party rolling. By any measure, the first music festival at Suttree Landing Park was a major success.

It started just about noon with the School of Rock, a school offering music lessons, with a heavy focus on young musicians. The group played a Led Zepplin set and I heard them as I walked toward the venue (I walked from downtown – a pleasant stroll to Suttree Landing Park). The young people in the band did a phenomenal job of delivering a difficult set list that included “Stairway to Heaven,” and “Been a Long Time Since I Rock and Rolled,” among others. The people I talked to raved about the performance (The drummer was singled out for daring to do Bonham and to do it well.)

I got in about the time the Pinklets started their set. The group, which has played Knoxville since the girls were very young – they have aged considerably, as the oldest is now 18 years old and headed for college – has come a long way. Originally a four-piece band, they eventually became a trio of Abernathy sisters. They played Bonnaroo a couple of years ago and now have announced that this date will be their last. Here’s hoping for a reunion tour as the young women have become very proficient at their instruments, better songwriters and very comfortable on stage. They are leaving  by dropping a final CD, so check that out.

The music kept rolling, thanks to a brilliant set-up. The two stages, which faced each other over the expanse of the festival footprint, alternated bands. That meant that while a band played on one stage, the other stage was being prepared, so that when one band finished, the next started. The music barely ever stopped for nine hours, which eliminated down-time waiting for the next band to play.

Additionally, bars were set up along each side to keep the alcoholic and non-alcoholic  liquids flowing (I think I drank four bottles of water). Food trucks offering tacos, burgers and pizza lined the north side, and they were joined by a number of informational booths and a merchandise tent. The middle was left completely open with the exception of the soundboard placed half-way between the stages.

Bands played forty-five minute sets, with the exception of the final two artists, who played an hour. It was just about the right amount of time to feel you’d heard a solid set, but not so long that if you didn’t care for a band you got restless. As it turns out, for me, these are all artists I’ve seen before and enjoyed immensely, so I could have taken more, but it was fun to have it shift so rapidly.

Teen Spirit took the stage as the Pinklets ended their set and Jonathan Sexton and crew really brought it. The nineties format they follow is always a big hit with the crowd as people danced and sang along, remembering a decade that just doesn’t seem like it should be so far in the rearview. The wealth of music from the decade is fun and pretty much endless. You can catch the party this Friday night at Scruffy City Hall.

Nashville musicians Andrew Leahey and Jon Latham swapped songs back and forth providing an excellent set of their well-crafted songs while rocking out with a very good backing band. The newly local (recently arrived from Austin) Thrift Store Cowboys followed with their set and the crowd responded in a big way to their alt-country sound. Expect to see this group make major waves around town and beyond.

Guy Marshall followed and delivered their typically fine set. That the group has been able to maintain a stable lineup and grow together musically was on full display. The old songs are tight and the new songs show continuing growth. If they aren’t having fun on stage, they are good at giving that impression. It’s always a pleasure to hear them and I’ve probably heard them a dozen times or more. They remain one of my favorite Knoxville bands.

As the afternoon wore on, more people arrived, the weather improved and the bands continued to lift the energy even higher. One my favorite performances of the festival followed when Charleston band the Artisanals took the stage. In only their second Knoxville performance, the band is quickly becoming a favorite. They are definitely one of mine and I’m pumped to hear their debut CD, set to be released next month. It’s the kind of straight-out rock and roll I’ve always loved. They’ve honed their sound touring with the likes of Band of Horses, and it shows.

The genre shifting continued with the clever folk of the David Mayfield Parade, followed by the bring-the-party funk of Luthi – another of my favorite performances of the night. They are also based out of Nashville, furthering that theme at the festival, and their debut CD, “Stranger,” is definitely worth a listen if funk is your thing.

Repeat Repeat brought their high-energy, fun surf-rock to the stage in the penultimate act of the night. Also from Nashville, they always offer a fun set and started this one with riffs from, “Rumble,” (google it if you don’t know it – Link Wray) and didn’t slow down to the end of the set. Aaron Lee Tasjan (Nashville!) ended the festival with a set that was, unfortunately cut a bit short due to lightning. The site was cleared before the storms hit, ending a great festival with a littl exclamation point.

I cannot express enough how amazing Suttree Landing Park is for any kind of event. The city sparkled in the background as pleasure boats and riverboats passed by. People did yoga, couples strolled. It’s simply an excellent place to enjoy our city and, as amenities are added, should increase dramatically in popularity.

The event was a major success for promoter Rusty Odom and Blank Newspaper and, hopefully, will be the first in a long line of Second Bell Festivals on the south shore of the city.

Expect tons of additional photos to drop later on the Inside of Knoxville Facebook page.