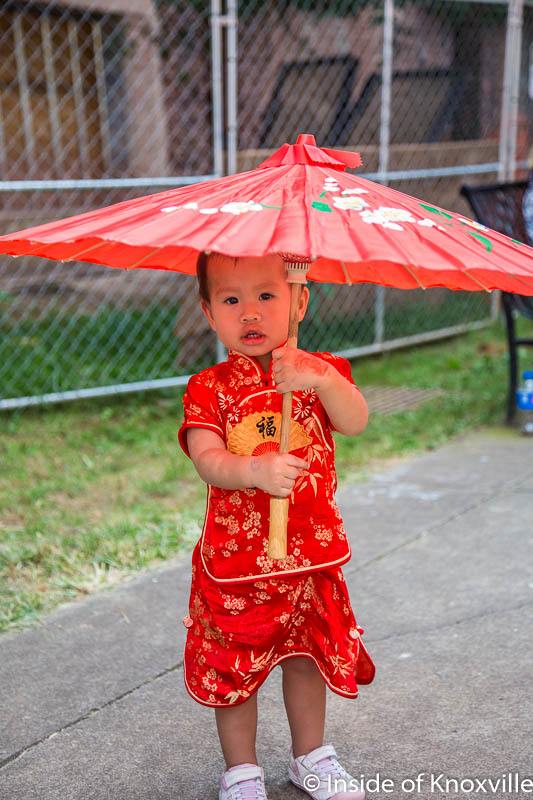 It’s hard to believe it’s been four years since the first small edition of the Asian Festival appeared one Saturday on the Krutch Park extension. Even in that first year, the event attracted enough attention that the park was crowded enough that the festival needed to be expanded. Last year the very expanded festival, which was moved to Sunday – attracted more than 30,000 people. This year’s event promises to be larger and better than ever.

Festivities get underway at 11:00 AM this Sunday morning with an Asian Country Costume Parade processing from Clinch to the Market Square Stage. It’s the best opportunity of the day to stand in one place and see representatives of every country. And the list of Asian countries participating continues to grow in every way. This year’s festival will feature 30 different Asiaan food vendors, 5 country tents, plus around 100 vendors and performers.

The entertainment will include artists from a range of regional locations, starting with the Taiko group from Disney’s Epcot, who will perform three times on the Main Stage. It was one of my favorite performances from last year and is not to be missed. Also on that stage, a Chinese orchestra from the Middle Tennessee State University Center for Chinese Music and Culture program will perform, as they did last year, but with a larger ensemble this year.

The entertainment goes far beyond the celebrity performances, however. Crafts and a bounce house will be on site for children, but also a traditional tea ceremony on Krutch Park and a movie will be showing in the East Tennessee History Center. Other performances include a Dragon/Lion dance by Wah Lum, David and Merry (fascinating east-meets-west folk music), Fusion Dance Project, The Maguire Twins (Identical twins from Hong Kong who are accomplished jazz musicians), Tai Chi demonstrations, Status (Asian Rock Band), K Pop, Caligraphy and Sol Kendama. Native dance will be presented from Korea, Vietnam, Thailand, India, the Philippines, Taiwan, Hawaii and more. And the list goes on and on and on.

The food has been a growing attraction from the first year and vendors have struggled to keep up with demand. The number of vendors and the number of places to sit and enjoy food have been expanded this year. Seating will be provided around the perimeter of the wooded area of Market Square, allowing more people to sit and enjoy the performances while enjoying the food.

Food vendors range from established local Asian restaurants to local families who want their home cuisine represented. It is an unparalleled local opportunity to get an incredibly wide range of foods. More than twenty vendors are promised for this year’s festival and they include representative cuisine from Hong Kong, Thailand, Indonesia, Laos, Malaysia, India, Burma, Korea, China, Japan, Philippines, Vietnam and Taiwan.

As has been the case in previous years, a passport program encourages everyone – children through adults (but especially children!) – to visit different country displays, learn a fact or two about the country, and receive a stamp on their passport. Clinch Avenue will be set up as the official “country street.” Eight stamps earns some unique Japanese candy.

This year’s festival will also feature some special guests, as we are joined by a delegation from Knoxville’s sister city, Muroran, Japan. Mayor Takeshi Aoyama and Consul General Hiroyuki Kobayashi will lead the group and will make remarks. Mayor Rogero and former Mayor Brown visited Muroran last year. Rumor has it Mayor Aoyama is preparing a song to present, so expect that to be interesting! Maybe Mayor Rogero will join him in a few bars.

The festival highlights diversity that is present in Knoxville, but is easy to overlook. It is presented by the Asian Culture Center of Tennessee, “a non-profit organization established to promote diverse cultures and celebrate traditions and talents from the Asian continent. As Kumi Alderman, founder of the festival puts it, “We are always trying to create a harmonious community and bring diversity.”

You can get all the details on the festival at the website or you can listen to the podcast from last Sunday’s radio show in which Rachel Rui, Marketing Director for the festival, discusses the details (bonus: Aretha Franklin music was the theme for the musical portion of the show). See you Sunday!