How Do We Develop Great Places? 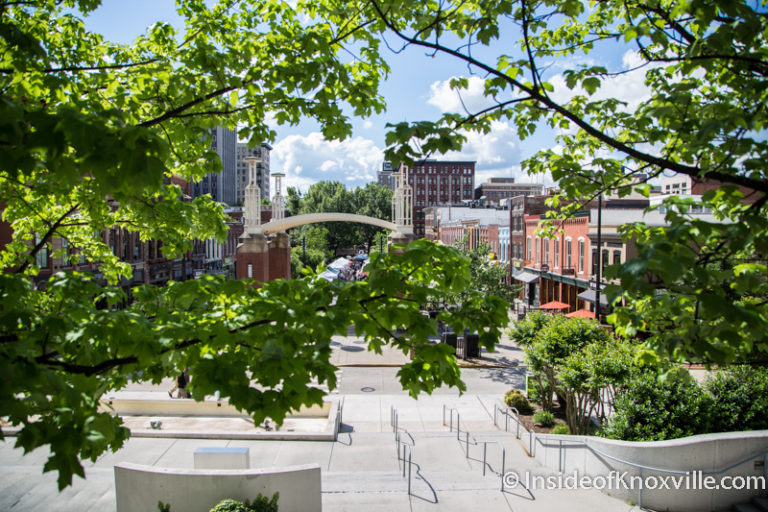 View of Market Square from TVA Plaza, Knoxville, May 2016

What is a great place? The answer is likely in the eye of the individual beholder to some degree, but there are places so loved by large groups of people that we might find some agreement. Of course there are grand natural spaces all around the country and the world – some of them, like the Appalachian Trail or the Mississippi River may be found in Tennessee.

But those places aren’t thanks to any of us. We didn’t make them and our only contribution may be that we didn’t destroy them like we’ve destroyed so many. So what great spaces do we build? One might think of cathedrals or palaces, great accomplishments like the Great Wall of China. We did those and people go to see them. But they are old. What’s new? What makes a good urban place or space? We do build those. Sometimes they happen a bit by fluke, other times due to excellent planning or vision. Sometimes the motive for their original construction may be more muddled – maybe profit was the primary driver. Does a good urban space from one generation necessarily translate to another?

These are important questions as we watch development heat up in downtown’s core and in every direction. We aren’t simply developing buildings, we are developing spaces for people – both the buildings themselves, and the spaces they form together. Architect Richard Rogers is credited with saying, “architecture is about public space held by buildings.”

Think about the great urban places you love. Your list may be quite different from mine, but there are a number of spots we can name nationally and internationally where people are drawn in massive numbers. The Champs Elysees in Paris, The Mall in Washington, D.C., Time Square, the French Quarter in New Orleans and on it goes. We talk about popular cities, but in most of the time it isn’t the entire city, but spots in it that draw most of the people.

Ben Crenshaw, designer with the Southern Land development group, in town thanks to Active Knox, said his company has noted several trends nationwide which guide their development decisions:

Most of these are self-explanatory, but let’s look at one of them; people want a sense of place authenticity. What does this mean? It means, of course, a place that feels real. A place that feels different from other places. To remove it from the theoretical, ask yourself this question: If I have out of town guests – particularly if they come from a pretty cool place – where do I take them? What is must-see, must-experience in my city? What is uniquely us? What makes you proud?

I’m going to venture a few guesses of local places you would not take those guests in order to show off your city: Kingston Pike, Clinton Highway, Chapman Highway, Airport Motor Mile, Turkey Creek, the mall and on the list goes. Ask yourself: If I don’t want to show those places to my friends, why? And if it isn’t something that we like – let alone love – why do we build it that way?

So where do you take them? I think many of us would probably have, at some point on our list, “downtown.” Why? We built Kingston Pike just like we built downtown. Why are we more proud of one over the other? What makes it special? More specifically, you probably want them to see Market Sqaure, Gay Street, the Old City and the World’s Fair Park with the Sunsphere. These places are uniquely ours. They aren’t the same thing you’ll find in other cities. Whether it’s Church Street United Methodist Church, the Tennessee or Bijou Theatres, the Art Museum or your favorite sculpture, these are ours. We value spaces where we engage others surrounded by architecture that makes us feel good.

Single use zoning and horizontal design gave us all the places we don’t want to take our guests. Re-code Knoxville is attempting to undo some of the devastation delivered by poor planning in the 1960s and 1970s. Mr. Crenshaw said cities all across the country are going through the same thing which is, essentially, returning us to the kind of development – construction of cities that served us well for thousands of years until personal mobility (aka cars) convinced us to turn those thousands of years of trial-and-error on its head.

Much of what we are missing today, such as walkability, was destroyed during this era. Essentially, it was outlawed because you couldn’t build a grocery store or school in a neighborhood. Sidewalks disappeared. Public transportation was seen as old-fashioned or for the poor. Now we’ve had sixty to seventy years to assume this current state is normal. Not only is it abnormal in the course of human history, it isn’t sustainable. We can’t keep up with the financial obligation of maintaining infrastructure that grows exponentially every year.

Some cities are working to face some of these issues. Some cities are requiring new construction to included affordable housing, like providing a percentage of new homes or apartments in a development to include some units which rent or sale for 20% of the take-home pay of 80% of the city’s residents. Boulder, Colorado requires builders to demonstrate how their project benefits the public before they are allowed to begin construction. For large buildings, they may require walk-throughs for the public or construction of a transit stop for residents, for example.

So, the choice is ours. Do we want to continue the pattern of the last seventy years? Do we want to build throw-away buildings? Do we enhance our sense of place or diminish it? Are we expecting developers to build in a manner that makes us proud? If not, why not?