Sordid Lives and a One Man Performance in Knoxville: An Interview with Del Shores 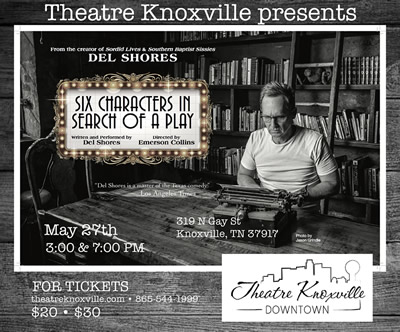 You’ll never see Tammy Wynette the same again, after you see Sordid Lives. The play, written by Del Shores, debuted in 1996 in Los Angeles and was followed by an independent film in 2000 and a television series in 2008. A Very Sordid Wedding was released just last year, once again, written and directed by Del Shores. The series has won numerous awards and is an often quoted classic among LGBTQ communities – particularly in the south. While Del Shores has received considerable acclaim for other works, it is this series – his “Sordid Franchise,” as he calls it, which is his calling card.

An icon for many, it may come as a surprise that he will be in Knoxville this weekend to bring his one man show, Six Characters in Search of a Show, which he both wrote and will perform twice on Sunday at the Theatre Knoxville Downtown. Beginning June 1, the theatre will present Sordid Lives in a two-and-half week run.

I spoke with Del Shores via phone as he traveled toward Nashville where he will give a performance tonight and Saturday night before arriving in Knoxville on Sunday. As a favor to a friend, I asked him first, as a person who is considered an icon and role-model to many, who he considers a role model for himself.

While acknowledging his admiration and appreciation for Harvey Milk because he was, “in your face,” he also acknowledged an admiration for drag queens. He pointed to a recent uprising among drag queens that brought down a racist owner of Burkhart’s, a gay night club in Atlanta. He said, “We get polite in our activism.” He pointed out that drag queens were instrumental in Stonewall and said one of his mottos is, “dream loudly.” He learned to love theatre from his mother who was his high school drama teacher, while the fact that his father was a Southern Baptist minister made their life complicated. After graduating from Baylor University, majoring in journalism and Spanish, he moved to Los Angeles to pursue his dream of being an actor.

There he encountered a problem: he didn’t find satisfying roles. He decided to write them himself, producing Cheatin’ in 1984. It was his second production, Daddy’s Dying: Who’s Got the Will that cemented his reputation. He noted that with his current one-man show, he has come full circle, through writing and production, stage, film and television to return to his original love: being on stage.

I asked him which he preferred. “I love all of it. My brain is all over the place. If I had to choose one, I’m most happy directing something I’ve written. That’s where I’m happiest, though it’s not so bad being adored, so I love being on stage.”

Noting that lines from his play and, particularly, the movie, Sordid Lives, are often quoted, he says, “I am still stunned. I can’t believe that my vocabulary as become the gay community’s vocabulary. Noting that he thinks his work sometimes attracts people to the theatre who aren’t used to its customs, he recalled a production of Sordid Lives in Atlanta, in which certain audience members kept calling out lines from the movie which were omitted from the play.

While saying he doesn’t intentionally write about people from a lower socio-economic status, he says, “I am drawn to these people. My mother was the only educated member of the family. At family gatherings, I was the observer. Those women were bigger than life and I love telling their story. I try not to judge.”

His own coming out experience was difficult. He’d been married and had two daughters. His father was a Baptist minister, as was a brother.

I realized I could not pray it away. I wrote them all a letter and my mother was an ally. She said she had known since I was little. My Dad came around as much as I could have hoped. His last words to me were, ‘I never understood you, but I want you to be happy.’ We have to give people time and, hopefully, we can be patient with each other.

He acknowledges that society has changed and attributes it to so many people sharing their stories and becoming known to those around them. “I was fortunate that my story was funny.” He is humbled and gratified by the people who have told him, “I introduced myself as a gay person to my family by sharing your film.” He says he was just telling his story from the beginning and had no illusions of becoming a symbol to others.

His new production is a “riff on Six Characters in Search of an Author,” the 1921 Italian play by Luigi Pirandello. He says there are a lot of layers to the production as he reveals to the audience how he develops characters. “None of these have been on stage. . . It was a bear to memorize. I love performing it. Lorraine (one of the characters) is the high school teacher who is loosing touch.” She is based on his mother who, “eighteen years ago, yesterday, I lost her. She died at age 64 of opiate addiction.” He says it is a funny production that, “stumbles into drama.”

I asked him why Knoxville and why small theatres?

I decided I wanted to go to all the theatres who have done my work and offer to give back. Theatres are struggling and we need to support them. I can trace every dollar I have ever made back to theatres who have produced my work.

His Six Characters in Search of a Play, Theatre Knoxville Downtownwhich he directs and performs as a solo artist will be presented this Sunday, only, at the at 3:00 PM and 7:00 PM. Tickets are $20, but $30 tickets are available for the production and a wine and cheese meet-and-greet with Mr. Shores. You may purchase tickets for that or for Sordid Lives, which runs from June 1 – 17, here. You can support Theatre Knoxville Downtown’s fundraising campaign to fund a new theatre, here.