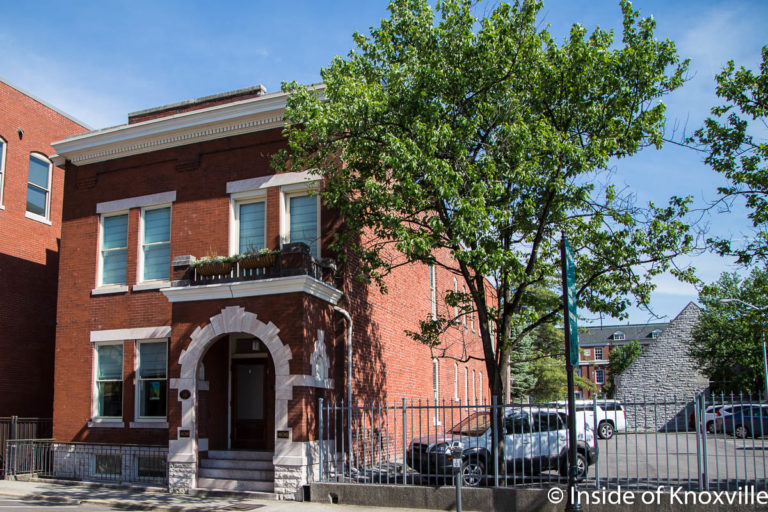 The first time I wrote about the Ely Building (May, 2012), it was on the market for $899,000. It eventually sold to Eddie and Kelley Reymond for $725,000 and I wrote about their plans for renovations (March, 2016). In August 2017, they were finally able to move into their home, though the basement and rooftop remain unfinished (the rooftop should be finished in the next few weeks).

The home, with beautiful architectural design by Sanders Pace Architecture and the build-out by Grace Construction was opened up as an introduction to the City People Home Tour for VIP ticket holders. A silent auction was held and proceeds went to their grants program.

The home consists of three floors – a basement, ground level and upstairs consisting of about 2,000 square feet each. The roof top deck will add about 500 square feet with interesting views in all directions. The home is pretty much as the couple originally envisioned it, with much more open space on the first floor and a white interior with a very clean modern look. Original doors were preserved, but walls were moved around to accommodate the new design.

The focal point on all floors is the exceptionally designed staircase. The light wood slats, the open view and the height all make it a compelling view from any spot. The ground floor is dominated by the open living space and the kitchen. The home, while technically four bedrooms, has been set up as a three bedroom, with an office. They’ve included a small projection room (with original pocket doors) and two full and two half baths.

Everyone has a different reason for moving downtown, or a different experience that draws them in. For Eddie and Kelley, it was their (now fifteen-year-old) son doing a stint as a “stick boy,” with the Ice Bears. His commitment required that he be at the games two hours early, meaning that his parents dropped him off about 5:00 PM two-to-three times a week. They began to explore downtown while they waited. And they began to fall in love with its energy.

A conversation at a particular hockey game turned to a downtown building that was available and what a good investment it would make. They suddenly became inspired to make it happen, and when that building didn’t work out, they looked for another and are now very happy the first one led them to the Ely (pronounced E-LEE). Without much thought, they made an offer and suddenly owned a building and embarked on a four-and-a-half year journey to moving into the space.

Eddie says a number of variables caused the long delay from purchase to moving in. The first hoop that took a large amount of time was finding a bank that would offer a loan. Comps were nearly impossible as they refused to use loft condominiums and stand-alone buildings serving as homes are in short supply downtown. Eventually, FSG and Atlantic Capitol made it happen.

The couple says the time wasn’t all a bad thing. They were able to watch downtown values rising, which they found reassuring. They were able to cash-flow pieces of the project as costs rose. Once the financing was in place, there was a long period of architectural design, then another of permitting. They had to wait for availability of the builder and more.

The couple says they began to think of it as something that would never actually happen. Kelley said that it, “meant that once we did move in, we didn’t believe it.” They said it got more exciting each day and they both talked about how happy they are waking up each morning in their new home. And they have a bonus of walking outside and seeing the building that they own.

They both work out of downtown – she as an RN and he at his own business – but neither feel that is any problem. They recalled being told parking would be hard. He parks in the parking lot on the old Supreme Court Site and says the walk is about forty-five seconds. She parks in the Locust Street Garage, though both say, depending on what time they drive into downtown, there is often street parking outside their home.

They have encountered a few difficulties and learning curves. Their dog has struggled getting used to city sounds and Kelley says those wake her sometimes, too, though she says as she’s gotten used to them, it’s made her a better traveler – she can sleep anywhere they stay despite any noise from the cities they visit. She’s also had to adjust to routine encounters with homeless people, though both of them say they’ve never felt unsafe.

While looking forward to having outside space on the rooftop, they both agree it’s the best move they’ve ever made. They feel comfortable giving their fifteen-year-old the run of the city and they enjoy that they walk more than they ever have before in their regular routine.

Little things have surprised them, like how the wind can whip between buildings and how many people take photographs. They said they routinely have people taking photographs outside their building. They’ve also been surprised to realize how much time they spend on the riverfront walking the dog or listening to music at Calhouns. Their idea of “where” downtown is has expanded. Eddie said, “If you can afford it, move downtown!”

While this home was open only for the VIP portion of the tour, eleven stops are offered on the City People Home Tour. They range from the the heart of downtown to the Knoxville High Senior Independent Living apartment building, which just opened, plus  homes nine homes in between. Urban Woman and I took the tour for years before our move in 2009. Check it out and see where you think you might fit into the downtown lifestyle.