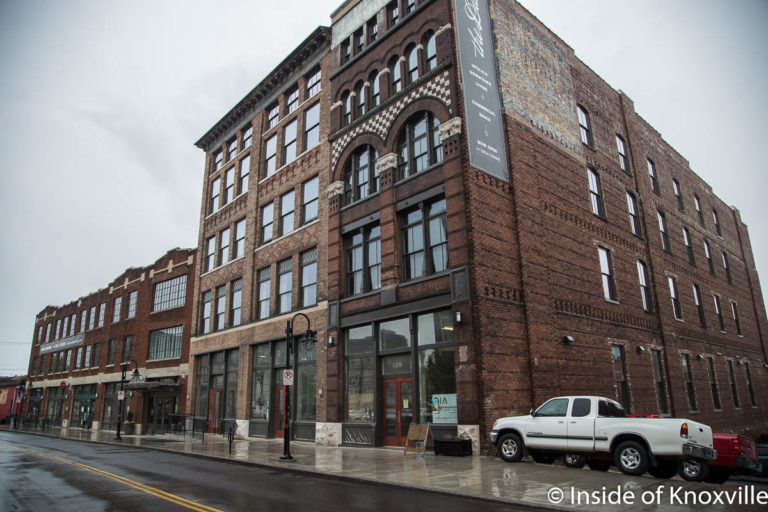 When the Daniel opened in January two years ago, owners Jon Clark and Ron Turner expressed an interest in filling the retail portion of the building with businesses which would enhance the building and the neighborhood, offering amenities that would make life in the Old City just a bit better. They’ve done well so far with the Old City Wine Bar, Rala and, soon, Rebel Kitchen. They look to continue that trend with the Old City Athletic Club, a fitness center which will open soon at 120 – 124 West Jackson.

The business will be co-owned by Thomas and Harrison Boyd, and managed by Tony Gray. I met with Harrison and Site Manager Lauren Jones who gave me the details on the new business – which will be open close to twenty-four hours a day and will be open to anyone – not just residents at the Daniel. It joins the Old City at a time of great expansion with construction and openings increasingly common.

Lauren is from Maryville, but grew up in Knoxville and is currently a senior in kinesiology at UT. She’s worked with Tony for several years at Crossfit 865. She lives just across the Henley Bridge from downtown and has recently gotten to know the Old City and is excited to be a part of it. She’s the one you’ll most often see at the gym.

Harrison Boyd was raised in Knoxville and attended High Point University. He lived in the Old City for a couple of years before moving just a bit to the north into Fourth and Gill. He says his time in the Old City gave him a feel for its potential. He has partnered with Thomas on other projects – most recently they brought Corks to one of their buildings in the Old City – but this is the first business he’ll co-own.

He said, “Fitness is something I’m interested in,” and he feels they’ve settled on the right size – they are taking two of the vacant spaces in the building as opposed to the three they originally targeted. He also feels that surrounded by the Old City residents – both in the Daniel above them and in the other buildings – the time has come that the Old City will be able to support a fitness business.

The gym will focus on general fitness, with classes on one side of the space and individual workouts on the other side. Both Harrison and Lauren stressed that the gym is for all fitness levels and all ages. They want it to be a neighborhood gathering place where people get to know each other.

The classes should include popular fitness workouts, such as spin, kick and yoga. They intend to offer classes that people want and they’ll adapt as needed. They are also building the space to be flexible as needs and interest changes. Showers will be available as well as a full range of fitness equipment and free weights. Personal training will be offered to those who are interested.

While specific rates have not been determined, some of the rate structure has. A lower rate will be offered to those who sign up early and a reduced rate will be available for a longer commitment. People will also be able to pay a monthly rate with no long-term commitment. Guests may have a free one-day pass and potential clients will be able to try out a class or the gym for a night to see if it is for them.

The name was chosen deliberately, to communicate what they hope to be. Harrison said, “We want it to have a club feel, to be social, to get to know your neighbor.”

The current working time-line is three months, meaning an opening in mid-summer. Harrison believes it might happen sooner than that. For now, you can follow and “like” them on the Old City Athletic Club Facebook page and watch there for announcements about the launch of the webpage. Once launched, it will be there that you can begin claiming your membership.