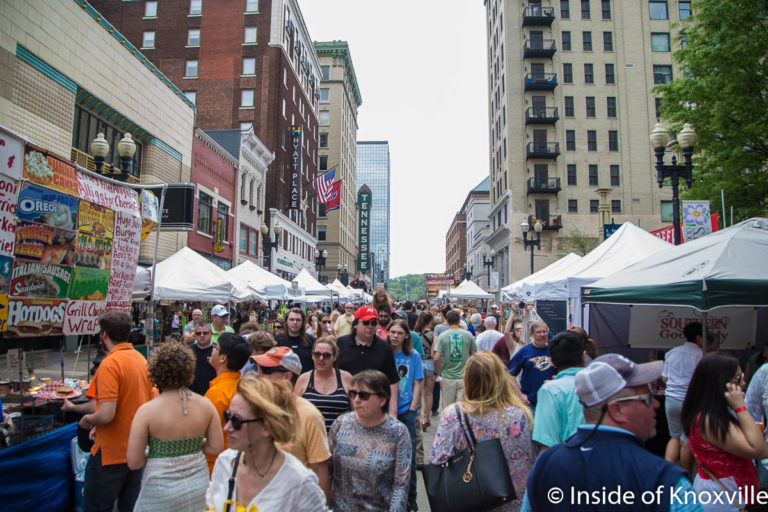 A miracle happened this past weekend in downtown Knoxville. It could not have been lost on several of the tens of thousands who arrived in the center city for the annual Rossini Festival. It must not rain every year for this festival, but it’s done it enough years that it’s almost expected. It was even predicted earlier in the week. But the rain held off until well after the festival had packed up for another year. Miraculous!

That simple fact made all the difference for the vendors, musicians and visitors to the festival. While it got a bit hot during the middle of the day and the crowds got a bit too thick for my tastes about the same time, the sunny-to-cloudy skies made everyone happy.

One pro-tip I can offer is arrive early. By early, I mean before the starting time. The vendors aren’t all set up, but the YMCA sponsored children’s activities are ready to go and the kids can do whichever activities they like over and over without a line. Urban Girl and Boy both dug the supper big slide and ran through it repeatedly without competition for a spot in line. They also enjoyed the bubbles, hula hoops, chalk drawing and more. This may be their favorite festival and it’s all about the children’s area.

For the grown ups in our particular party, it’s more about the various musical performances. We seem to gravitate to the choral stage, though this year we mixed it up a bit more. Urban Woman and I enjoyed the opera stage very much this year, chilling and listening to an aria or two.

The range of music and dance presented makes this festival interesting. We heard opera and choral music, but I also listened to some brass and jazz. We heard bluegrass and watched traditional Spanish dance, along with contemporary dance. And that didn’t scratch the surface of what was offered. I have to say my favorite of the day – and this varies every year – was the UT Middle Eastern Ensemble. I found their sound absolutely enchanting as, apparently, did a large crowd gathered to listen.

Our regular buskers had, I suspect a good day. Robert Maddox was out with his saw, Outlaw Ritual was playing their good music, Harley Chapeau commanded a big crowd for his magic show. At some point Harley moved on and the guy playing the steel drums did his thing. I saw an accordion player. None of them are officially part of the festival, but they added their bit.

I’m off-and-on about the food. It isn’t the kind of food I would normally eat, though sometimes who doesn’t need a funnel cake? That said, does Gay Street ever smell better during the year than on the day of this festival? I think not. It is one of the perks of living downtown to be able to buy some of the food and take it home for a break.

It’s also fun to have alcohol sales allowed on Gay Street for the day. With strict controls for public drunkenness (none of which I have ever observed at Rossini), wouldn’t it be delightful if that was the norm? Maybe it’s just me on that and the funnel cakes.

All-in-all, vendors included, it was another good Rossini Festival with a little something for everyone. From medieval actors to a beer garden and everything else involved, something is sure to appeal.

And so, Festival Season continues. Next up is the Chalk Walk along with a new event to coincide with it: the Sidewalk Sideshow. You can learn all the details about each in my latest podcast in which I interview the people behind both events.