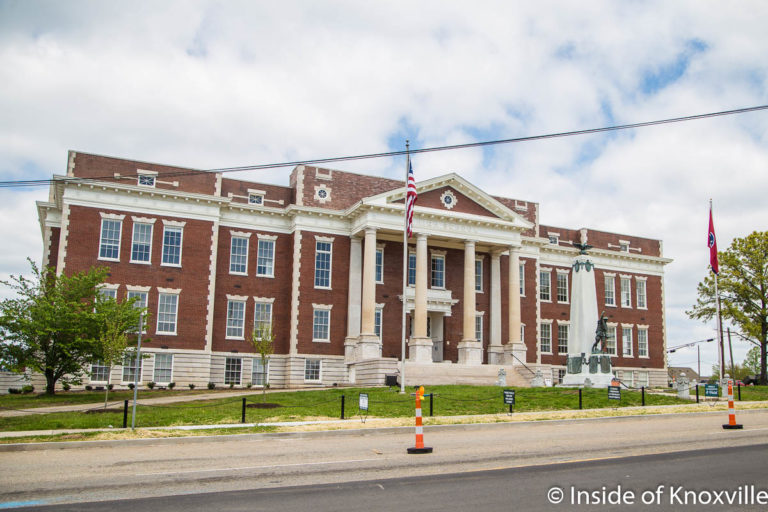 It’s been a long road, one that Rick Dover acknowledges has sometimes been frustrating, but he also says it’s what he enjoys most – making the improbable happen despite the obstacles. I first wrote about Knoxville High School nearly five years ago when his proposal for redevelopment of Knoxville High School was selected by the city and he announced intentions to make the building into apartments for older residents.

It may be a situation in which if he’d known before he started how difficult it would prove to be he might not have done it. Then again, he had a conversation years ago with Kristopher Kendrick who told him that he felt Knoxville High School was the finest building ever built in Knoxville, saying, “there is no building in Knoxville with greater provenance.” Kristopher knew he wouldn’t get to redevelop the building, but he felt someone would.

The conversation is one reason the renovation and redevelopment has been so important to Rick. He told me, “I’ve been doing this for thirty-nine years and I’ve never done a project I am more proud of.” He said that some of the delays in opening involved getting parts of the project “to about 90% and then we’d see something we could do better.”

He pointed out that the fact the building was remarkably intact was both a blessing and a challenge in the renovation. Incorporating modern technology like HVAC, sprinklers, wifi and more without diminishing the historical character was difficult. They preserved the pressed ceilings, all doors and doorways, transoms and stairwells. Keeping the state and national historic organizations happy, meeting local codes and making the project financially viable is the trick and he loves the challenge.

He’s completed award winning projects such as the Alexander Inn in Oak Ridge, Oakwood School and, very recently, the Farragut Hyatt Place Hotel on Gay Street. He says the projects are, “like your children and you aren’t supposed to have favorites,” but this one, he says, has him, “blown away. Just look at the hand-carved hand rails,” which they had to repeatedly strip to peel away the layers of paint to get to the original wood. “It’s 108 years old and this building sings.”

Many decisions along the way resulted in lengthy efforts that delayed the project. The windows proved the most difficult. He and architects D.K. and Kendel Levy looked exhaustively at all available possibilities of energy efficient, historically accurate window replacements for the white oak windows and found none. The detailing just wasn’t right.

Ultimately, they decided to reuse every window which was still intact. They were all removed from the building, taken to another location and “dipped and stripped.” The glass panes were removed and re-glazed. The building has 537 windows and most have at least 12 panes. They also attempted to preserve all plaster in the windows. The windows took a year-and-a-half while one man devoted himself for a year to nothing but window plaster repair.

Under the direction of project manager Shay Ramsey, while directing those efforts, a furniture refinishing crew worked the building to restore book cases, railings, stairwells and more. A company in Maine was employed to build replicas of balusters to replace those that had been lost over the last century. “You start a dance with a building and you don’t know where it will end. I refuse to be disappointed with the finished product.

There are actually five different buildings in the complex. One was originally a fire hall. He’s very proud that the original doorways are all in place and none have been added, meaning, as former students traverse the hallways, the building is just as they remember it when it closed in 1951. I met one such woman who was absolutely glowing at what she was seeing.

The building has now been divided into 80 apartments with about 60 ready for residents. About 80% are one bedroom and the rest are split between studio and two bedroom units. The apartments are simple and attractive, featuring massive windows and great light and all are equipped with a full kitchen and washer/dryer unit. It’s the light that makes the entire building feel like such a happy place. The units are being marketed as “55 and up,” but that’s somewhat flexible.

While it is in no respect a medical facility or care facility, there are many amenities which have appeal for older residents. Staff and security are on-site twenty-four hours a day and all rooms have interior entries and emergency call buttons. An Events Director will plan activities of different sorts both inside the building and as excursions. An Executive Chef has been hired and the kitchen staff will deliver three meals a day – included in the rent.

What is included in the rent – and the terms of the rent – are two of the things that make this a unique place to live. There are no leases. Residents take a room on a monthly basis and may stay as long as they like. Rent ranges from $1695 per month for the smallest studio apartment up to $3895 per month for the largest two-bedroom unit. Rent, however, isn’t simply for the unit. It includes those three meals a day, utilities, wifi, weekly apartment cleaning, fitness facility, valet parking, transportation to appointments or other destinations and planned activities.

Saying this type facility is usually only found in larger markets, Dover says it will be an active and safe place to live, with a great staff. He estimates there will be 30 full-time jobs there when it is fully staffed. Management is provided by Senior Solutions Management Group with Lavonda Cantrell serving as Executive Director.

Rick said he wants people to know he is excited and grateful for the opportunity and that it is open to the public. He encouraged people who may be interested for themselves or who are simply curious to schedule a tour and come take a look. He said you won’t find a hard-sell when you get there, simply people who are proud to show a building – and a way of life – that they think are very appealing. You’ll also find great museum pieces of Knoxville High School history on every hallway.

Residents will begin moving in next week and a Grand Opening and Ribbon Cutting is set for next Tuesday at 10:00 AM, which would be a fine time to come and take a look. You’ll find more information here and here and you can book a tour or get more information by calling 833-623-0053. You can also follow them on Facebook.

Ed. Notes: I will post additional photographs on the Inside of Knoxville Facebook Page sometime later. Also, please join me at 10 AM Sunday morning on WUTK, 90.3 FM (http://www.wutkradio.com) when my guests will be Sara and/or Sean Martin discussing the upcoming Fourth and Gill Home Tour (and maybe that little HGTV project they worked on).