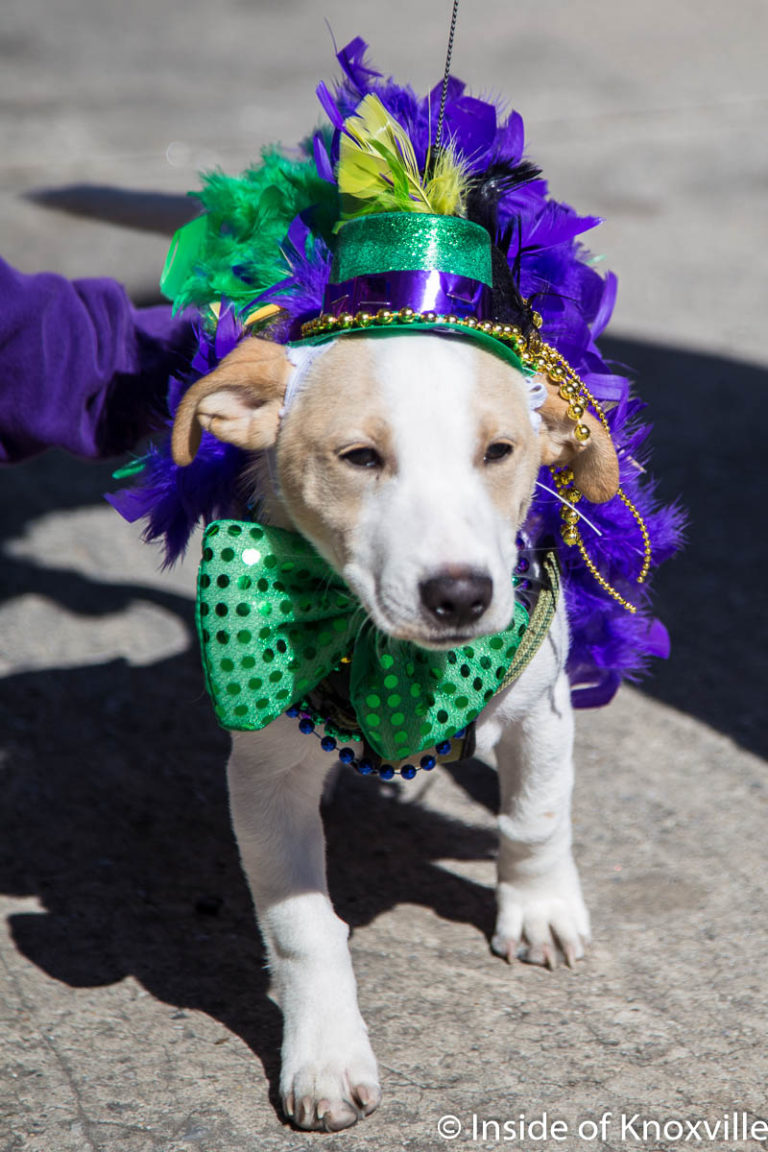 The eleventh annual Mardi Growl event has come and gone, once more. For many of us downtown if feels like the introduction to spring – albeit usually a chilly one. For me, it’s my little taste of the gulf coast Mardi Gras spirit, if in canine form. For everyone, it’s a fun, funny and colorful way to end a cold, gray winter.

It’s also for a good cause. Young-Williams Animal Center mounts the event and this year’s presenting sponsor was the Old City Wine Bar. Billed as a “dog parade and pet party,” the event has grown in numerous directions to include more activities, booths, education components and simple fun.

The numbers of canine participants seems to increase each year and crowds continue to line the parade route. Last year was the first to feature a marching band leading the parade – something that was replicated in this year’s event – and the Fulton High School Marching Band added just the element needed to ratchet up the festiveness of the event. I did hear that a few puppies didn’t like the drum corps, but I have to say, a Mardi Gras themed parade without a marching band playing the Saints just isn’t the same.

Another trend that seems to pick up steam each year is costumed humans accompanying their canine owners. I love it. Some of the human costumes are as fun as the dogs. Many of them match their dogs. One of my favorites was the little Voodoo dog and his Voodoo mistress. Others don’t match, but wear the purple and gold or some variant of spirited attire.

“Floats,” also continue to be among some of the most creative entrants, with carts or buggies pulled or pushed along the parade route while precious rides along. I think these no only proliferated this year, but became increasingly elaborate. For the smaller dogs, it’s probably a bit more humane as the parade route is quite long and potentially unnerving for our smaller friends.

It is always hard to judge the number of spectators. We stood on the 300 block of North Gay and a thin line of people ran down each side of the road. It’s really too bad there aren’t more. I think the fun – and even creativity quotient is as high for this parade as for any Knoxville has to offer. Judging from the crowds on Market Square, out Market Street and in Krutch Park, however, it was well attended.

Of course, there was much more than a parade. The event ran for four hours and included the opportunity for rabies shots, microchipping and scheduling appointments for spaying and neutering. Adoptable dogs were easily found and available from different groups. Vendors offered everything imaginable, from the tangible to the less so – like training.

The only downside to the event is the massive amount of dog droppings that downtown residents grumble about. It really is important for visitors to downtown who bring their animals – whether on this day or any other – to remember to bring bags and use them. This is our neighborhood and it’s the living room where we welcome guests from all over our region and beyond, so let’s keep it nice, right?

I’d be remiss if I didn’t mention that we had at least one party crasher among the puppies: I small porker was noticed poking along. I think we can give the small creature a pass, as it may be a while before we have a annual Piggy Parade. As always, these are only a small sample of the photographs I took at the event. Almost 100 will be available later on the Inside of Knoxville Facebook Page.