Is Knoxville’s Coffee Community about to “Bloom?” 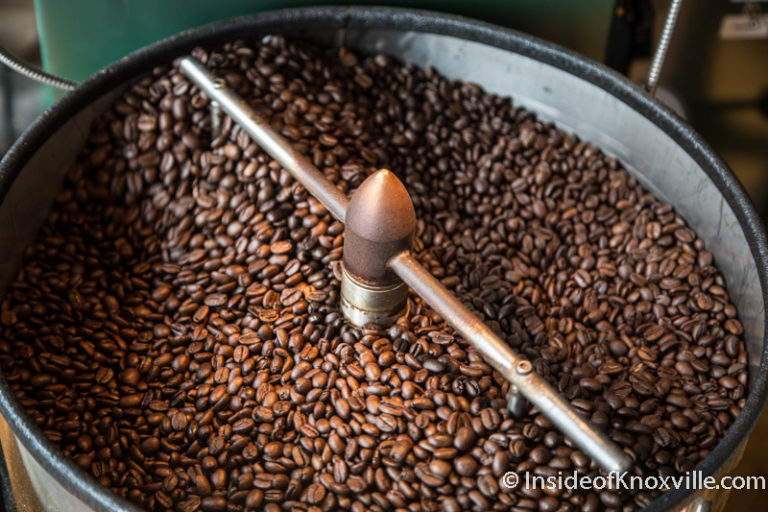 What do Providence, Rhode Island, Portland, Oregon, Seattle, Washington, Los Angeles California and Knoxville have in common? It could be a major coffee event.

It’s been a while since I talked about coffee in Knoxville, other than the occasional aside. Truth is, I really enjoy a good, quality cup of coffee. I’m certainly no coffee snob – I can’t talk about soils and the various beans they produce, or discuss minute variations in roasting processes and the differing flavor profiles they might generate. I just know I like good coffee. Nothing irritates me more than having a great meal – good food and wine – and then closing it out with an inferior cup of coffee.

When I arrived in Knoxville in 1982, the state of coffee in Knoxville was dire. I’d loved a great coffee house in Gainesville, Florida where we’d lived for the last two-and-a-half years. Cafe Espresso offered a variety of coffees from around the world and stretched my coffee palette beyond the coffee I’d grown up with – though some good coffee with chicory is still a good thing. When we arrived in Knoxville, I set out on a quest to find poetry and coffee – two things I loved. I eventually found the poetry, but the coffee remained elusive.

In 1982, there were no coffee shops in Knoxville. It would be a number of years later before Java and then Golden Roast opened, offering a small alternative in a coffee-less universe. JFG coffee opened for a while, though the coffee wasn’t of the caliber of the others. I still enjoyed it’s cozy spot and used books.

Fast forward to 2018 and we seem to have a coffee shop lurking around every corner and more are set to open. In the downtown area, coffee-lovers choose between Wild Love Bake Shop, K-Brew, Remedy, Awaken, Java, Coffee and Chocolate, Vienna Coffee and, now, two Starbucks locations.

Pearl on Union should open in the next few weeks and coffee shops are planned for the Embassy Suites, Tombras Building and the Marriott Garden. Honey Bee is just across the river, along with Three Bears roasters. Golden Roast still does its thing on the strip and Starbucks may be found on campus and on the strip. And that’s not even to mention the restaurants and cafes that now take coffee seriously.

That’s the final retail point between you, me and a good cup of coffee, but someone has to roast it, first. There are several area roasters. Vienna is the biggest and best known, but Golden Roast roasts (is there a better way to say that?), as does Honey Bee. Jeff Scheafnocker roasts Three Bears Coffee and he says it all has to start with higher quality beans. His brand has done very well selling at a number of restaurants and grocers throughout the area.

He acknowledges that local coffee has improved and says roasting culture will improve as people learn more about coffee and care more about where it came from and become more interested in local options. While noting that coffee culture is small relative to, say beer or whiskey culture, he says he maintains a focus on caring for the farmers he works with and providing a good cup of coffee to his customers.

It’s also important to note that what happens in Knoxville is connected to what happens elsewhere. While certain cities are known for their coffee roasters or coffee shops, there are national organizations attempting to make an impact, like the Barista Guild of America. In an email, Todd Mackey, BGA Executive Council said, “The BGA . . . create(s) learning and networking opportunities to raise the collective level of professionalism within Specialty Coffee.”

Cait McGehee, the regional representative to our area from the Specialty Coffee Association and current Knoxville resident says of her role, “The SCA is a trade association that works directly with the Barista Guild of America (as well as the Coffee Roasters Guild, Coffee Technicians Guild and many other coffee professionals) to support and deliver value to its members. The broad goal of the Barista Guild of America is to support coffee professionals working as baristas.

“They provide educational opportunities to teach industry standards, execute events & competitions to sharpen trade skills and draw together as a community to share ideas and discuss topics impacting their day-to-day.” She added, “I feel fortunate to be in a city with incredibly talented baristas and exceptional specialty coffee offerings.”

All of this is coming together in a fun and informative series of coffee events hosted by Vienna Coffee at the Regas Building next Thursday, Friday and Saturday with Bloom: Coffee Conversations in Motion. While directed at coffee professionals, everyone with an interest in coffee is welcome. Presented by the SCA and the Barista guild, the fun event starts Thursday night with a party featuring prizes, some friendly competition and, of course, coffee.

The centerpiece of the three days are the four simulcast sessions offered on coffee-related topics. The simulcasts are broadcast from Providence and will include similar events in Seattle, Los Angeles and Portland. Not bad coffee company for a Scruffy little city to keep. Topics covered will include chocolate, coffee processing and a session on gender, focusing on female baristas. A “Knox Coffee Village,” featuring local roasters and shops, will be on hand to keep participants well caffeinated.

Of the event, Todd said, “A strong value moving forward in the BGA is the desire to be a community of communities. We aspire to have Bloom embody this value. A barista attending Bloom at Vienna Coffee in Knoxville will be connecting with baristas in LA, Portland, Providence and Seattle. It’s living out the idea of connecting both virtually and actually, corporately and individually.”

Cait echoed those sentiments, saying, ” Bloom and the recent Latte Art Throwdown are invaluable opportunities for our baristas to grow their knowledge, craft and community. Coffee is a career for many and I’m excited to see how Knoxville baristas will impact the world for good through coffee! I highly encourage anyone with the slightest interest in coffee and sensory sciences to attend Bloom!”

So, it’s for “coffee professionals,” but the public is welcome, as well. And if we ever want Knoxville to become known for coffee and for coffee shops, we’ll need the two to come together – better coffee and more educated consumers. Shuan Parrish of Java and Wild Love recently told me that every independent coffee shop must make the customer’s experience a good one because it reflects on them all – and there are corporate options in 2018.

Thursday night and Saturday are non-ticketed, while the Bloom sessions on Friday cost $10 and may be purchased here.