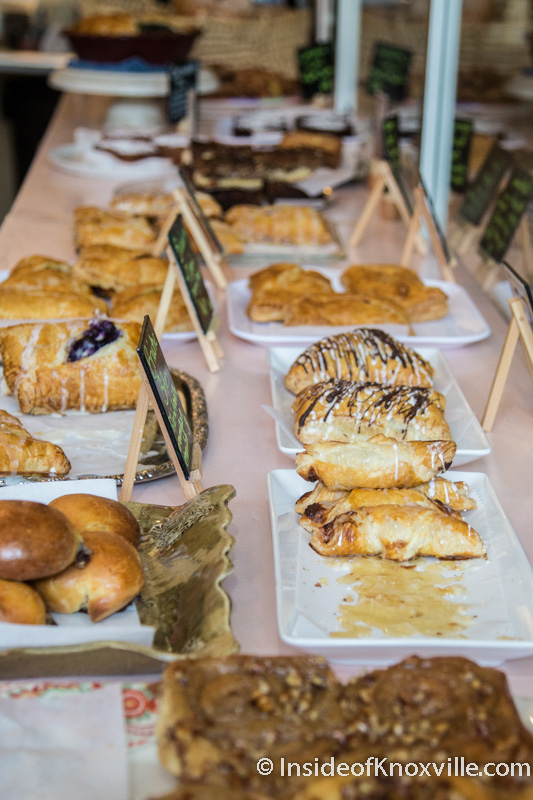 Everything comes to an end, and after about three years, Kymberle Kaser has announced that time has come for the Breadshed Cafe. As with any momentous decision regarding an effort to which you’ve devoted your life, this one comes with a wild mixture of emotion. She’s looking forward to new adventures, but she took some time to look back at the last three years.

“What I loved about this place was the community that formed, friendships, people talking across tables, rarely disagreeably, no matter the topic. People came here for what was beneath the surface.” Combined with the community that evolved around the cafe, was the joy she felt teaching people about food. As the local ambassador for the Jamie Oliver Food Revolution, she loved helping people sort through concepts like gluten-free, vegan and vegetarian.

Kymberle started making bread for Sapphire in 2010. She’d lived in Haiti prior to that and had spent time there baking and roasting coffee. She started bringing bread to the Market Square Farmers’ Market in 2013, but struggled to find a kitchen to use. She was offered the option of using the commercial kitchen at Ijams and did so until they closed it. She feared she would lose all the momentum she’d built.

Then she found the small space at 1122 Broadway when friends alerted her it had come open. Deciding to open a shop, rather than to simply locate her kitchen there, she opened with $200 to her name and a hope that customers would come quickly. She worked forty hours straight after opening that first day and 100+ hour work-weeks have not been uncommon since, but she’s pleased that she was in the black from the beginning and had as many as three employees who she was able to pay, while keeping the business going and supporting herself.

She took “baby steps” along the way, eventually buying a “real” refrigerator and a new oven. She considered her focus to be the “product, not the bling.” She was also determined to offer a wide range of product and the range of people who became her customers seemed to appreciate it. It pleased her when people who had traveled the world eating the best food appreciated her work.

And while she says she learned it as she went, some things were clear to her from the beginning. She wanted a place where everyone felt included and accepted, “without having to post a sign that says so.” She’s pleased that, “half of her clientele has been from outside the country.”

She also wanted to operate the business in as sustainable way as possible, with “as small a footprint as possible,” and her customers have been very supportive of her efforts. She hasn’t used any plastic cups in three years. Excess food is composted or given away. Take out boxes are compostable. She hasn’t gone through one box of straws. People often bring in their own mugs or containers for carry out.

Another of her goals has been to inspire young girls to know that they can chase their dreams without a partner and without a big bankroll behind them. As the word has spread the shop is closing, some of her young female customers have expressed their appreciation for her support inspirations and encouragement and that has moved her.

A practice she has developed over the years the business has operated has paid off for her customers and, now, may lead to her next step. Instagram has been a big driver for the business and she has followed others  who challenged her, or were “way ahead of me,” including pastry chefs in San Diego, New York and across Europe. She’s learned from them and fostered relationships which, in turn, have offered options she may pursue from Atlanta to the United Kingdom or beyond.

She thought 650 square feet on the corner of Glenwood and Broadway was where she had connected, but she’s realized from all the conversations about other options, her reach has been much wider, though she says it’s a bit overwhelming to consider what to do next and that she may find a beach to sit on for a month simply to regain her balance a bit before proceeding. She plans to through hike the Appalachian Trail at some point and has other longer-range goals in mind.

While the business has been successful, she faced raising rent and wasn’t certain the business could continue as the margins have always been small. She said she didn’t realize it would be emotional or how much the business had meant to so many of her customers. “I thought it would just end.” She wiped the corner of her eye as she explained she never cries.

She wants the focus to be on new beginnings, but she’d love to see each of her customers this week to say a proper goodbye. She’ll be open until 6:00 PM Tuesday through Friday so people can drop in after work. She will be open at the regular time on Saturday and promises to stay open, “until everything is sold.”