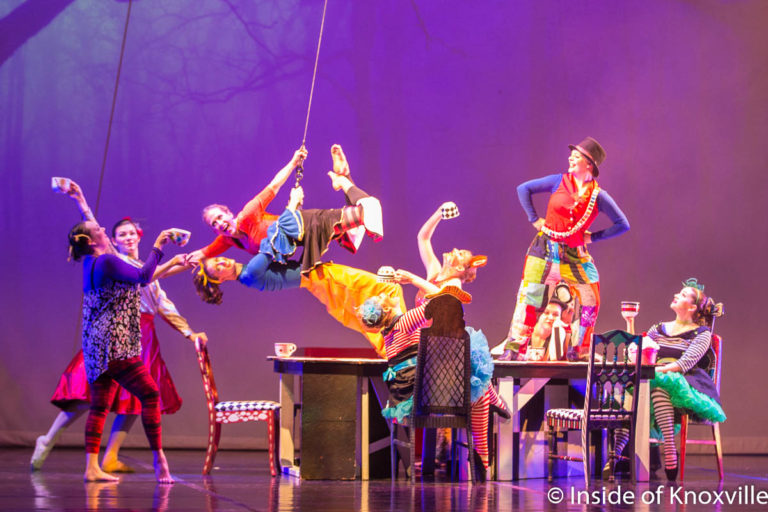 Urban Girl and I spent some quality time in the city this week, thanks to the Knox County flu epidemic. She created a bit of art at the Basement Community Art Studio and we bowled until we were both exhausted at Maple Hall. We topped Friday off with her first adult urban party which she passed while taking goofy pictures on my cell phone. The highlight of our time together, however, had to be Go! Contemporary Dance Works‘ performance of “Alice: A Revolutionary Ballet.”

Artistic Director Lisa Hall McKee stated the objective of the presentation was to capture the simple entertainment of the original work. The subtexts and interpretations of the work, from the psychedelic to the developmental were set aside for another day while the troupe dazzled the audience with a stellar performance.

It’s hard to over state the work that must go into a production of this caliber and complexity. The choreography takes center-stage, of course. The dance production was complex and ran for over two hours. Simply developing the choreography to tell a story so complex and surreal must take months. Nine different women are listed as having a part in this critical element for the company.

Beyond developing the choreography, the dancers must both memorize and execute it, which, again, particularly for the lead dancers must require an amazing capacity for memorization and many, many hours of work. Harper Addison, who has been featured by the group in the past, danced in the role of Alice and always seemed in control of the stage, dancing expressively and beautifully.

Other standouts abounded. Ellery Jernigan as the hookah smoking caterpillar (I’ll confess that my primary connection to the play is “White Rabbit,” by Jefferson Airplane), Ruth Ann Bendy as the Cheshire Cat, Lauren Wise as the Mad Hatter and Micah McKee as the Queen of Hearts and Sarah Joyce performing aerial feats all performed wonderfully.

The musical selections also played perfectly with the dance, story and themes. The selection of the perfect music for the performance can’t be understated and it represented quite a gamut of artists – many of whom I had never heard. Phillip Glass, whose work has been featured at Big Ears, was represented in a couple of pieces and some fun favorites such as the Squirrel Nut Zippers and the Preservation Hall Jazz Band also made musical appearances.

Costuming is another element of the production that always amazes me. Three costume designers were listed in the program, along with numerous volunteers. The combination of costuming, lighting and set pieces gave the dancers the palette needed to display their skills in a way that both enhanced and accentuated their performances.

In the end, Urban Girl and I remained a bit sketchy about the story, but that wasn’t the point. She was delighted and I was wonderfully entertained by another dazzling performance by the group. It’s a great organization to support and they never disappoint. The audience seemed to respond in much the same manner.

You can catch them next at the Rossini Festival, April 14. May 4 and 6 they will join forces with Knoxville Opera to perform Aida at the Knoxville Civic Auditorium. Catch them when you can.

As always, these photographs represent only a small portion of those I took. I’ll post the full collection (134 photographs) to the Inside of Knoxville Facebook page later today.