After Multiple Strokes, Local Artist Chris Cornett Returns (and Could Use Your Help) 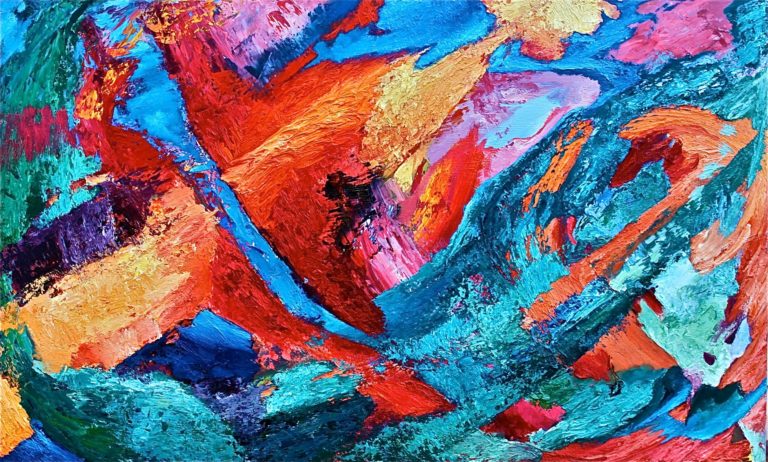 Just over five years ago I first encountered the art of Chris Cornett. The challenging nature of the works and the striking use of color captivated me at once. I took my first photograph of his work at Preservation Pub and later that year at Union Avenue Books. We first met a year later at an art and jazz show at Paulk and Company and I found that I enjoyed the artist as much as the art.

Given his age (very young), and apparent health when I’d seen him, I found it shocking to see on Facebook this past December that he’d suffered multiple strokes. It started months earlier when he was diagnosed with asthma. By last summer he was suffering from violent coughing spells that would last hours. The wheezing was so severe he could hardly breathe.

In August, just before the birth of his child, with his health deteriorating, he lost his job and, along with it, his health insurance. The coughing grew worse, becoming almost constant and his young son started wheezing.

He’d suffered such severe damage by then that in the beginning of November he, “had a stroke that the operating surgeon said was direct result from my coughing fits. The coughing caused a tear in my carotid artery which started collecting blood in the tear until the clot became large enough to block off the artery, starving my brain of blood.”

At Parkwest Hospital he was told he’d need to go on blood thinners and would need surgery. That’s when the second stroke happened and he was quickly transferred to Fort Sanders where he was taken into surgery, “to remove three blood clots and repair my artery.” More procedures followed, resulting in hospital and other medical bills exceeding $40,000.

The resulting recovery has been better than some stroke victims experience, likely because of his age and relative health before the episode began. Most of his motor movement has returned, though he continues to have various neurological symptoms. He tells me his sense of feeling continues to be erratic, such as not being able to feel what’s in his pocket, random shooting pains and strange reactions to changes in temperature.

He’s able to continue working on his art, given that the impairment is on his left side and he is right-handed. He’s looking for work that he can immediately do as he continues to recover. He’s worked in web development and that might be a good fit. His immune system has been impacted, so outside work, which he’d done for nearly four years with the same company, probably isn’t an option at this time.

So, it’s complicated, with the loss of the job and insurance coming just after the birth of his son and just prior to having strokes. The young couple and their child have significant debt. That’s why he turned to the Go Fund Me campaign, really out of a sense of desperation and not knowing where else to turn. They’ve applied for relief from some of the debt, but they aren’t sure at this point how much help they can hope for.

I’d encourage you to help Chris, Stephanie and Harrison if you can. Even small amounts can add up and they’ve gotten a good start, but they clearly will need more. For those of you with a bit deeper pockets, consider buying a piece of Chris’ art if it fits your tastes. You can find more photographs of his current work on the Chris Cornett Artist Facebook Page. You’ll also find his contact information there.

If you’d like to see his work up close and personal to consider if you might be interested – or if you’d just like to stop in to support Chris and offer a word of encouragement, you can do so this Friday night. As a part of First Friday, he’ll have an exhibition at Ironwood Studios at 119 Jennings (about a block off Broadway out Central on your left). The Art Show and Fundraiser starts at 6:00 PM. I hope you’ll drop in. And consider hitting the Go Fund Me in the mean time.

*Ed Note: This article has been amended at the request of the artist to remove references to the possible origins of his illness.