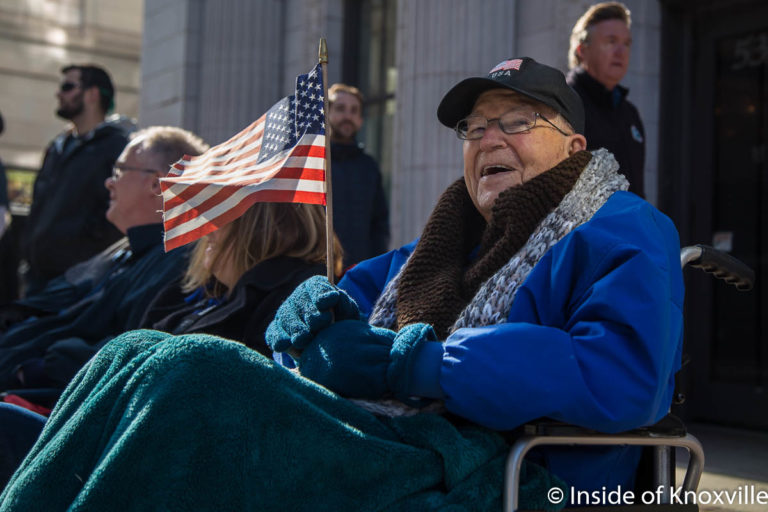 It was a cool, but comfortable, sunny day on Gay Street last Friday for the 92nd annual Veterans Day Parade. By parade time the crowds lined both sides of the street for blocks, several people deep in some spots. Lots of flags waved on each side of the street.

Lots of people waved flags or otherwise showed their patriotism. The children were beautiful, as always. An elderly vet in a wheelchair holding his American flag stole my heart a bit. One man held a confederate flag. When I asked him why he had that flag, he asked, “Why not?” I pointed out that most people had American flags and he responded that he did, as well.

The grandstand filled with veterans and local government officials including Mayor Rogero, and council members Finbarr Saunders, George Wallace and Dan Brown along with others. In front of the grand stand the national anthem was followed by a twenty-one gun salute and the playing of taps.

The parade began with members of the Navy and there seemed to be a bit of a naval theme. Representative Duncan rode near the front of the parade. By this time next year his successor will have been chosen giving his district their first new congressman in three decades.

The many banners associated with the military, country, state and various other organizations were on full display and glistened as they passed. While the naval theme continued, a submarine passed by. Soldiers representing every era from the Revolutionary War forward were represented. The L&N Stem School fielded a steam punk group to support the troops.

All manner of soldiers were represented, but there were at least a couple of canine stars along the way. One walked with a lone soldier while another hung out a car window. There was also a cute puppet protruding from a window. Most moving to me were the children in the parade, as well as the very old veterans from World War II. Thinking of what they’ve seen that I’ll thankfully never know is overwhelming, as was the vehicle holding the Gold Star Mothers. That one’s hard for me.

As always, there were massive numbers of cars – corvettes, mustangs and antique cars – and a requisite number of motorcycle groups. Many flew various flags, among them that remembering MIAs. DAR groups joined Knights of Columbus. Buffalo Soldiers were represented and brought with them the Bob Marley song playing on loop, which was fun and maybe not what I’d expect at a Veterans Day Parade.

And there was noticeably more security. In addition to vehicles blocking side streets to the parade route, there were heavily armed policemen in fatigues wearing flack jackets and carrying semi-automatic rifles. It’s a sign of the times.

The happy and long parade lasted over an hour-and-a-half and, it seemed to me, more people stayed to the end, though people drifted out as it went. It’s one of our best and most moving parades and as it approaches its hundredth anniversary, it seems like to continue for many more. If we’re divided on many other points, respect for veterans and what many of them have gone through on our behalf is one point where most of us are unified.

I’ll have another hundred or so photographs on the Inside of Knoxville Facebook Page sometime this evening.