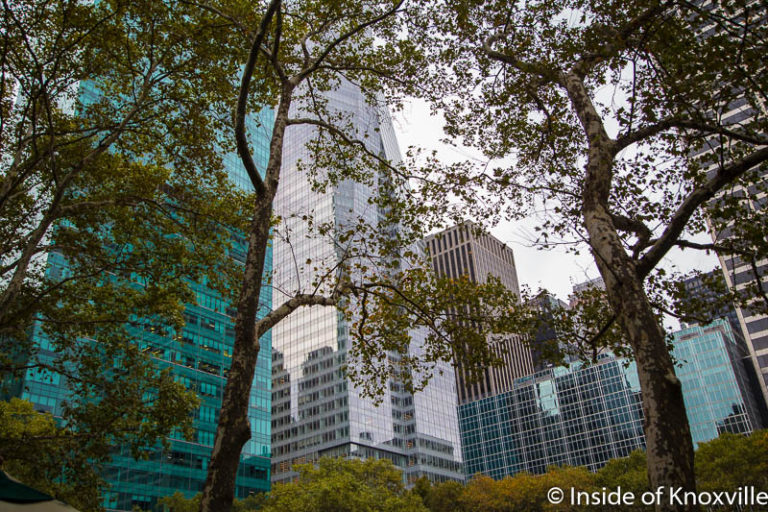 After an early October trip to New York City, I promised photographs to come, but never quite got to it. The week of the Macy’s Parade seems like a good time to go there. As much as I love cities, this was only my third trip. I first went to the city with my family at eight years old. I had several life-changing epiphanies: Some people don’t have homes (seen sleeping on the sidewalk). People of different races can ride in the same car (I know). Not everyone in the world is Southern Baptist (visit to a Buddhist Temple).

I returned in 2000 with my sixteen-year-old daughter (eventually to become Urban Daughter) and this was my next trip. Urban Woman and I brought along eight-year-old Urban Girl, so the trip was shaped a bit for her. We flew Allegiant to Newark and took the train into the city. Easy and cheap.

I was stoked to have a real camera and a slightly better understanding of cities (thanks to the education I’ve gotten from so many of you). First discovery at the Knoxville airport: Dead battery in camera and no charger. That could have made for a lost day or more of photographs in the past, but by the time the plane departed, thanks to the WWW and a smart phone, I found a camera store in the city, learned it was open on Sunday and charted a path to it on our way to the hotel.

John’s Pizzeria was our first destination. The former tabernacle has a stained glass ceiling and awesome pizza. Three people for pizza, no alcohol, $80 with tip. Hello, New York! We walked to the New York Public Library, but found it was closed. I loved the courtyard full of chess players and we discovered Bryant Park which we came to enjoy during our stay. A Pret a Manger on 6th, adjacent to the park would become our go-to for breakfast. Urban Woman and I loved them in London and I wrote on the blog at the time (2011) that I would love to see one in downtown Knoxville.

A couple of other observations the first day: A street nearly taken over by kiosks and a bike lane, reduced to two lanes. Interesting way to accommodate pedestrians and take back some of the car-centric real estate. Also, the Times Square Ball exists year round on top of the building! I assumed it disappeared everyday of the year but one, or was put into a massive box in a warehouse, but there it was.

I ended the day with one of my favorite moments: After the ladies bedded down, I went out for a couple of glasses of wine and found my way (with a helpful suggestion) to Bar 54 on the 54th floor of the Hyatt on 45th Street. It’s currently the highest rooftop lounge and the quiet views above the city were spectacular. I highly recommend it if you visit.

Our first full day started with encounters (completely accidental) with stars (who I did not know) outside the studio of Good Morning America. I think I saw Kelly Pickler and Jason Ritter. She was OK, but he won the friendly award, mingling with the crowd and enduring selfies.

Of more interest to me (nerd alert) I also began noticing the Citibikes and the range of people using them. NYC has not been a major cycling city in the past, but that may be changing. Started in 2013 with 6,000 bikes, the program now has 12,000 bikes and averaged about 38,000 trips per day by last year, reaching 50 million rides in 2017. They were easy to spot, though not seen in large groups like in some European cities.

We spent a rainy afternoon in the Museum of Natural History where in the midst of the mummies and dinosaurs, it was the (very well done, but still) dioramas that Urban Girl could not stop staring at. And they were fascinating, but still – compared to mummies and real dinosaurs? Eight-year-olds, who knows their brains?

We ended the day with a “fancy” dinner in the Marriot Marquis in their View Lounge on the 46th floor with a rotating 360° view of the city. Urban Girl loved it and thought she was the stuff. The open elevator ride up, “made her stomach feel funny.”

I’ve included photos of the spectacular buildings visible in every direction. It’s really a sensory overload for a boy from Alabama all those years ago and a girl from Tennessee in 2017. Seeing it through the fresh eyes of an eight-year-old made me appreciate its enormity afresh. With half the trip over, she was falling in love with the city just like I did at that age. And we had so much more to come. More on that tomorrow.