Plans Announced for a Major Building on Gay Street 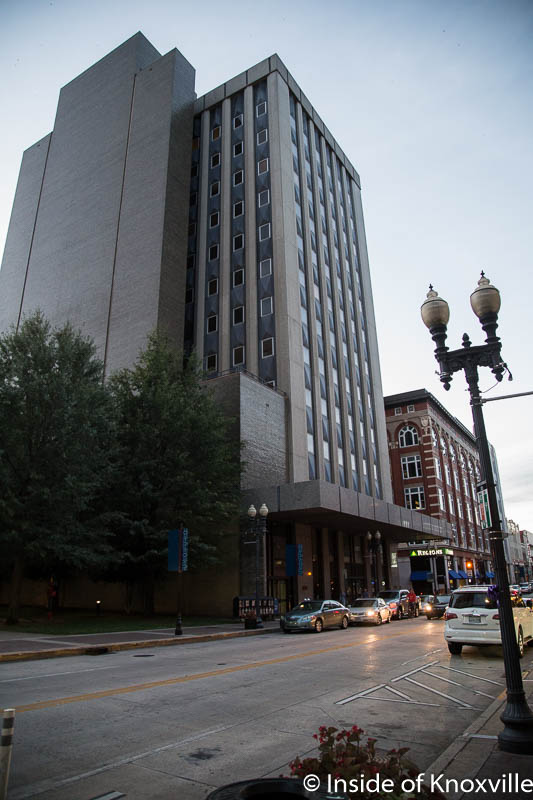 Three weeks ago I wrote about the Conley Building at 505 – 507 South Gay Street. After a range of uses over the years, serving mostly as banks and office space, the building had become entangled in legal wrangling between two owners, resulting in a long-term under-utilization, including a prime corner at Union and Gay sitting empty for years.

The situation seemed deadlocked until the negotiation of a complex deal in which a new owner, Knoxville Hotel Partners, LLC, would take the entire building. The company behind the LLC is the Kana Hotel Group headed by CEO Alpesh Patel. I sat with Mr. Patel to discuss his background and the plans for the hotel.

Noting the deal to make the purchase was more complicated than any others he’s worked through, he said it was touch-and-go until the last moment as to whether the deal would come together. After nearly two years of negotiation, however, he says his company is now clear and in control of the property.

His company researched the market looking for which flags were available for a downtown hotel, whether those flags would be feasible and whether it matched market needs. When he looked into the Conley Building and saw the mezzanine, he knew it would be perfect for an Embassy Suites.

Mr. Patel was born and raised in Knoxville, graduating from Carter High School. He attended Cornell University’s Hospitality/Hotel program. He worked for Ernst and Young as a hospitality consultant and lived in New York for two years. In 2003 he returned to Knoxville and, sold a couple of small properties owned by his father, and founded the Kana Hotel Group.

He built the company’s portfolio, “focused on taking care of guests and it grew.” He emphasized, “building great hotels and providing excellent services.” Noting that urban hotels are doing far better than others, he said he doesn’t consider himself visionary or he would have purchased property in downtown Knoxville ten years ago. He sees the downtown Embassy Suites as his company’s flagship hotel.

Making a serious commitment six months ago, he began work with design to see if the building, which has always contained offices, could be reconfigured to include sixteen suites per floor. The conclusion was that it worked perfectly. Previously focused on ground-up construction, this project represents the company’s first adaptive reuse.

Plans call for floors two through twelve to include 176 suites. The possibility of using the thirteenth floor for two 2400 square foot condominiums is being explored. Also planned is a rooftop bar and pool. The bar will be open to the public as an amenity to the city and will feature some of the best views in the city.

Of particular interest, is the ground floor. Coming on such a prominent corner, a hotel lobby utilizing the entire space would seem unfortunate. Mr. Patel agreed, saying he is invested in having a ground floor that engages downtown residents, visitors to the city and hotel guests. A portion of the ground floor will be a restaurant and he intends for it to be competitive with other restaurants in the city. He also intends to incorporate an additional business or two on the ground floor that would similarly attract all people in the city.

The challenge in the new building starts with a complete demolition of every wall and replacement of the entire wiring and plumbing systems. The work will begin in February of 2018 and will take about a year from beginning to end with a hoped-for opening in the spring of 2019. Whereas typical costs for a new hotel for his company run around $15 to $20 million, he anticipates this will be about  a $40 million project.

Regarding the number of hotels currently located downtown, under construction and planned, he feels this hotel will succeed based on location, amenities and brand. Acknowledging the number of rooms, he points out that his company is betting on Knoxville’s continued business and residential growth and feels the current growth in hotel space will be absorbed.

He said he intends for the hotel to feel very boutique and local and that it will not a be a “cookie-cutter,” hotel. He plans, for example to include work by local artists throughout the hotel and he’s looking at other touches, such as a pink Tennessee marble and other touches. He said he is personally going through many details he would typically outsource because he sees this property as special to his group. It’s in his hometown and it’s personal.

ED NOTE: Don’t forget the CBID Sponsored Meeting – Brainstorming: Enhancing Downtown Living tonight at 17 Market Square from 5:30 to 8:00. Have your voice heard regarding the direction our downtown takes.