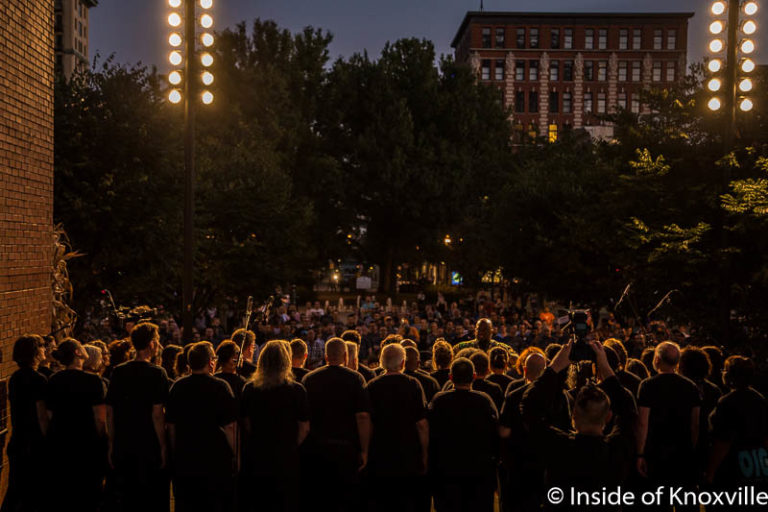 Worlds sometimes collide and that was the case for me, yesterday. After five days in New York City, Urban Woman, Urban Girl and I returned to Knoxville. I love Knoxville. But New York City, which I’ll probably write more about in the coming days, is, after all, New York City.

Our visit there was fabulous in so many ways. And you get used to those buildings cradling you on every side and we had breakfast in our favorite spot one last time on Thursday morning and then caught our plane. The green as we neared Knoxville was beautiful and the mountains sparkled. But the city is so small. Reentry to downtown seemed difficult in a way.

Then I took a walk with Urban Boy who’d decided (at two, he decides a lot, believe me) he would spend the night. We stopped in to Union Avenue Books to see Scout, but Scout wasn’t in. We walked to Market Square, played lightly in the fountain and got a cupcake, muffin and coffee at Market House. I started remembering the tiny touches of why I love the city, though still feeling that small town thing.

When we heard sounds coming from the Market Square stage, Urban Boy’s ears perked up a bit. I think he’s got that love of music I share with my brother, wife and daughter. I hope he has my brother’s talent. He decided we would go to the stage and check it out, which we did. I learned that the Oakland Interfaith Gospel Choir and the San Francisco Gay Men’s Chorus had stayed in Knoxville for an extra evening and that they would perform.

I’d been very disappointed when I learned that their Lavender Pen Tour of southern cities was coming to Knoxville and that I’d be in New York City when they performed in our coliseum. The tour of five southern states in seven days was set to commemorate the fortieth anniversary of the San Francisco Gay Men’s Chorus and to offer support to LGBTQ communities throughout the south. Money raised in our area was directed to PFLAG in Oak Ridge, the Knoxville Gay Men’s Chorus and Positively Living.

After a successful performance Wednesday night, plans called for a concert at noon on Market Square. That performance, as it turned out, was delayed to 7:00 PM, which offered me the chance to hear the groups, though only the ensemble, Swag, from the larger San Francisco Gay Men’s Chorus performed with the Oakland Interfaith Gospel Choir.

A good crowd gathered on Market Square by 7:00 PM, despite the short notice, and Mayor Rogero introduced the groups, expressing her gratitude that Knoxville was included on the small tour. And then they rocked. After a couple of songs from the ensemble, the Oakland Choir sang and then the two joined forces. Of course, many in the crowd were from the chorus, so they knew all the words and what to do with them.

It was uplifting and encouraging. A mix of praise songs and gospel standards had the crowd on their feet, singing, dancing and clapping hands. By the time the night ended with an upbeat and powerful version of, “We Shall Overcome,” the crowd had become completely engulfed in the joy of the music presented. Urban Boy, decked out in his Captain America pajamas (it started at his bedtime) heartily approved.

And so, my reentry to Knoxville turned out to be a reminder of why I love this place. It’s small, yes. It may sometimes seem provincial. But it’s friendly, comfortable, warm, and open. It’s urban to a degree, but with a small town charm. It’s home.

We’d seen great shows and sights in New York City. I’d happily hop a plane and return, right now, if offered the chance. But, in my small southern city, I’d walked two blocks from my home and encountered the San Francisco Gay Men’s Chorus and the Oakland Interfaith Gospel Choir. For free. And with a large, happy, responsive crowd. That’s not a bad welcome home and no small reminder of how special this place is that we live.