Old City to Get New Wine and Spirits Store 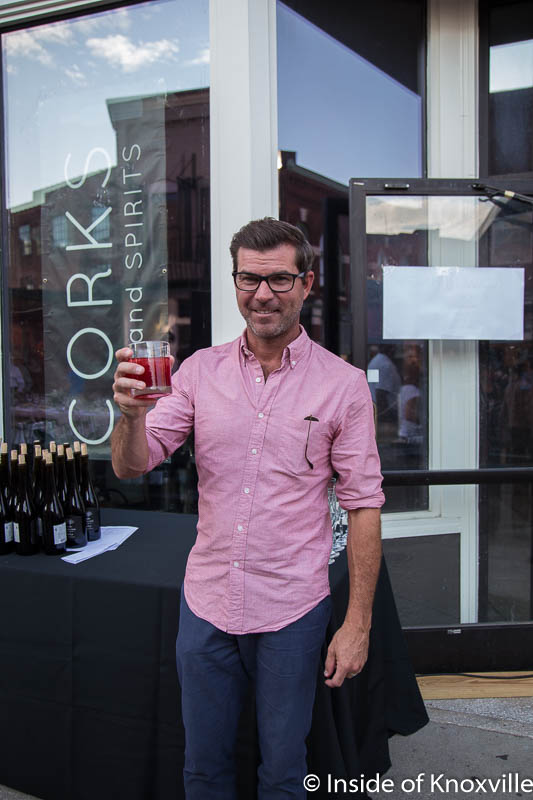 Corks Wine and Spirits will soon move from its business from Turkey Creek to 113 South Central Street in the Old City. It’s a move Ryan McElveen says he has been contemplating for a while. Originally intended to be a second location, he has become convinced it’s a better spot for them for the time being and plans to make it their only location for the near term, though he hopes to eventually open a second location out west.

As a member of a military family, Ryan moved around quite a bit as a child. Eventually attending college in Tallahassee, he moved to Atlanta after graduation carrying his life savings of $287 and all his belongings in a Honda Civic. Staying with a friend in Atlanta, he got serious about a job when he got down to his last $10 and took the first offer he got – working with a wine distributor in Orlando. It was there that a friend at Disney spurred him to become a certified sommelier.

He eventually moved to Knoxville where he began work selling medical devices. His dream to open a wine store came true five years ago when he got a license and opened Corks. He says that grocery store wine sales have decimated wine stores and his is no exception. Whereas he’d considered a second location, he became convinced that the boutique wine business he wanted could be more successful in Knoxville’s downtown, feeling it would be a good fit for the area and also just a bit farther from grocery stores.

His approach is to treat the store as a hospitality business. He doesn’t use the word, “customer,” as it carries a connotation of a commodity. He prefers the term, “guest.” The hope is that any trip inside his establishment will result in guests learning something new about wines while, hopefully discovering a wine they will love. He hopes they taste something new and are able to get a better quality of wine at their price point.

The downtown store will be similar in many respects, but it will be about half the size of the west store which is around 5,000 square feet. Customers familiar with the west location will recognize the music playing on vinyl albums when they enter. New and old customers will also find an interesting feature not commonly available in area wine stores: 27 different wines on tap. The taps are very high quality wines Ryan is able to buy from remnants of production runs and sell in liter containers at a reasonable price – much like beer sold in growlers.

Interestingly, they also plan to carry some convenience items for the neighborhood, such as Cruze Farms Milk, locally sourced eggs, Flourhead bread and other basic items by producers you might find at the farmers’ market. It’s not meant to be a grocery store, but a small help to get through the week if you run short of something.

Sourcing locally is one thing the store tries to do where possible. He said they’ve always felt like their vibe fits downtown and vise versa. Ryan said, “We want to be a good steward of this region when we have the opportunity. Obviously, the primary product isn’t generally local. But they have locally sourced ancillary items such as bitters and syrups. You’ll also find regionally crafted leather wine bags, for example.

The build out of the store should start this fall, with a planned opening on January 2. Hours are planned to be 9:00 AM 0 11:00 PM. He said you can expect all-day tastings and special featured wines on a regular basis. You’ll find their Facebook Page here and you can check out his sommelier skills on October 10 when he goes Somme vs Somme with Matt Burke of the Old City Wine Bar