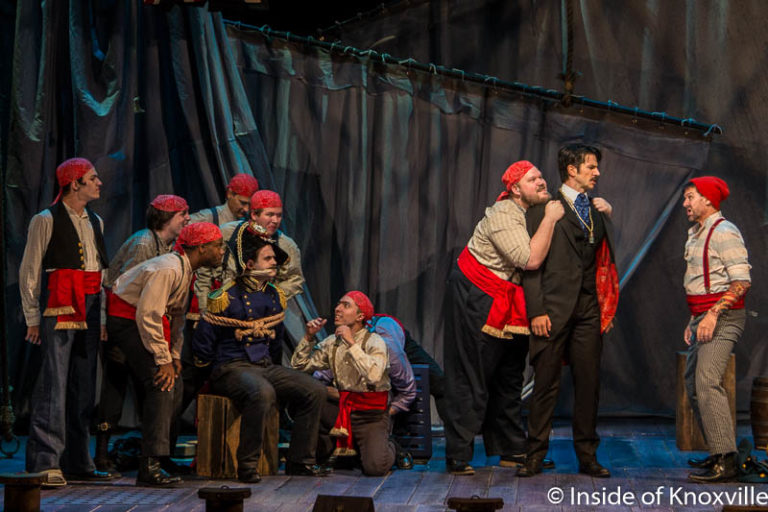 Urban Girl and I had a lovely outing last Friday night to Clarence Brown Theatre’s new production of “Peter and the Starcatcher.” If I heard the phrase, “Oh My God!” once, well, I heard it a bunch. She spent the weekend quote and reliving scenes and loved meeting the stars including “Peter Pan,” after the production on opening night. Below you’ll find Alan Sherrod’s review of the play. Alan is best known locally for his classical reviews written for Knox Mercury. You can find this review and much more on his newly revamped arts site Arts Knoxville. The photos used here are mine and I’ll have more of those later today on the Inside of Knoxville Facebook Page.

There is no greater example in literature of the boundlessness of childhood imagination than the story of Peter Pan. Created in a number of vehicles by J.M. Barrie including his 1904 play, Peter Pan, or the Boy Who Wouldn’t Grow Up, and his later novel, Peter and Wendy, his works have inspired a plethora of adaptations and expansions in books, television, animation, and motion pictures. Not surprising, the most successful of these efforts embrace the ephemeral benefits of actual imaginative whimsy, despite technology-driven visual trends in the opposite direction.

Just such imaginative whimsy is the basis for a vastly entertaining production of Peter and the Starcatcher which opened Friday evening in the Mainstage Series at the Clarence Brown Theatre. This ‘play with music’, a prequel of sorts to the familiar Pan story, offers an explanation of how a nameless, mistrustful orphan boy became the eternal youth known as Peter Pan. A journey aboard two ships from London to a mysterious island—complete with a shipwreck, a crocodile, and hostile natives—sets up the as-yet-unnamed characters that will eventually inhabit the later story. Based on the recent children’s novel by Dave Barry and Ridley Pearson, Peter and the Starcatcherwas written by Rick Elice, with music by Wayne Barker.

The magic of the work—and of this energetic, virtually balletic production directed by Casey Sams—is its willingness to unapologetically embrace that childlike whimsy without foregoing a reasonably complex narrative style that intrigues adults. Yes, along with a storyline that requires the audience pay attention, come the highlights of childhood humor: puns, double entendres, secret languages, dress-up, timely anachronisms, even fart jokes.

Sams has employed just enough fascinating modern theatrical technology to support the narrative and force the audience to use their imagination, while leaving the ensemble and actors doing multiple roles—as sailors, natives, and pirates—to work their suggestive magic. Ocean waves are panels of cloth operated by the ensemble, as are flying birds and the ship’s poor cat; lighting defines hallways and hatchways; the simplicity of two identical chests, something of a Hitchcockian McGuffin, motivates the action.

It is that ensemble-ness that gives works like Peter and the Starcatcher its admirable energy and rhythm. But, that same quality also sets up the enjoyable surprise of watching ensemble members step out to become new characters. That’s certainly the case with the appearance of the character of the pirate Black Stache, played with magnificent comic villainy by Charles Pasternak. The role is, by design, flamboyant and physically presentational, traits that Pasternak possesses in spades, along with a cunning sense of linguistic delivery. Few actors could turn three words, “Oh my god,” into an entire scene, one that, well, hooks the audience. Pasternak was seen in last season’s The Busy Body: A Comedy and previously in Titus Andronicus with CBT.

New to CBT and Knoxville audiences is Jason Edward Cook in the role of The Boy. Cook carves out an admirable character metamorphosis as he moves from sullen orphan to heroic leader. Of course, his transition on board ship is aided by the strong-willed and tenacious 13-year old Molly, daughter of Lord Astor, portrayed with both lovely adolescent charm and subtle strength by Ellen Nikbakht, the sole female in the cast.

In the comedic dress role of Mrs. Bumbrake, Molly’s nanny, was CBT faculty member Terry Weber, proving once again his flexibility in selling a side story. In this case, Mrs. Bumbrake catches the eye of the husky sailor Alf (Doug James) as hilarity ensues. In another role practically made for his brand of outrageous physical comedy, CBT regular David Brian Alley turned up as Black Stache’s sidekick and verbal whipping boy, Smee.

Aaron Orlov, seen as Passepartout in last season’s Around the World in 80 Days, brought his subtle, self-deprecating comedic style to the role of the supposedly vicious ship’s captain, Slank. Also from Around the World in 80 Days and the role of Phileas Fogg was Jeff Dickamore as Lord Astor. Jude Carl Vincent managed a hilarious Jamaican accent as Fighting Prawn. Jackson Burnette and Robert Parker Jenkins took the roles of Peter’s fellow orphans, Prentiss and Ted. Keegan Tucker and Mark Jennings were Sanchez and Captain Scott, respectively.

Christopher Pickart’s set of hanging fabrics and rope accents, all framed by a Victorian-esque proscenium, was endlessly adaptable for the abstractness of the staging. The fabrics were canvases for Kenton Yeager’s lighting and marvelous projections by Nevena Prodanovic. The look was completed by Erin Reed’s costumes, which included mermaid-like attire for an Act II opening music number featuring the ensemble that was simply an over-the-top showstopper; music direction by Terry Silver-Alford.

However, one must inevitably return to praise the ensemble quality of this production. It’s flow and accuracy, its rhythm and punctuation, gives Peter and the Starcatcher its life and its heartbeat.

Peter and the Starcatcher runs through September 17 at the Clarence Brown Theatre.