City Council Breaks the Tie in District Four: Is the System Fair? 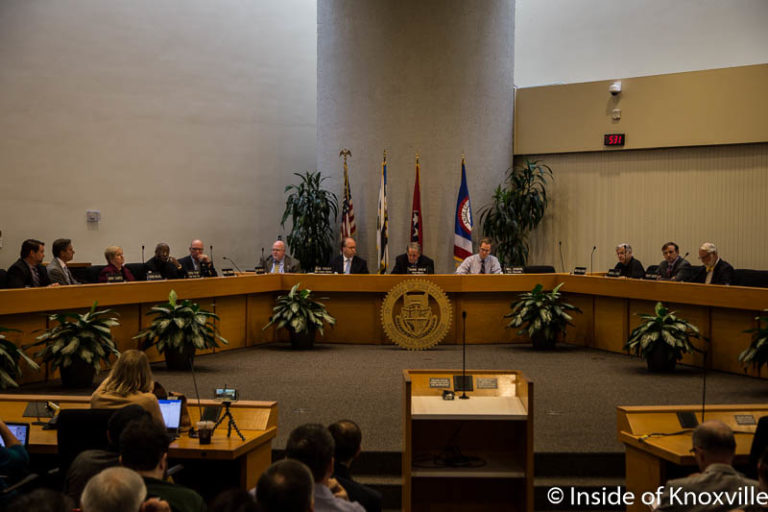 It seems everyone in the city was surprised on election night except for Cliff Rodgers, Knox County Administrator of Elections. He spoke first at the special session of the Knoxville City Council last night. He pointed out that he was explaining to everyone concerned, prior to the election, how they must proceed in the event of a tie. His only misstep? He expected the tie to come in the crowded field of the sixth when it actually came in the fourth district.

As he addressed City Council, his focus was not on the individual candidates, but on the process. He expressed frustration at the low voter turnout. Focused on the idea of a special election to break the tie for second place between Amelia Parker and Harry Tindell, he explained it was impossible to hold a special election in the time allowed and satisfy all state and local election requirements.

He also explained that the candidate not selected by council could run as a write-in candidate, but to be considered for the position, any such person must register by September 18. The name would not be shown on the ballot, but they would be eligible for victory should they prevail.

After a few words from Rob Frost, the attorney for City Council, who made it clear that the charter only allows for two candidates and that the charter can’t be changed before next year, Finbarr Saunders questioned whether a coin toss might be the most fair way to settle the issue. Rob Frost spoke negatively of that option and Nick Pavlis made a motion that the matter be decided by simple vote and that was approved. Councilman Saunders made a statement that selection by city council should not be presented as an endorsement by the candidate selected.

The floor was given to each candidate for five minutes, followed by supporting statements of two minutes each for two supporters each. Amelia Parker spoke first and noted that she feels it unfortunate that this procedure is codified in Knoxville as it discourages, “speaking truth to power,” as it may be punished. She’s spoken to them before and this may have been a reference to that appearance.

She focused for the remainder of her five minutes on her experience and degrees – she’s a lawyer – as well as what motivates her to pursue the position. She said she wants to represent people who are not represented, pointing out that a black woman has never been on council. She noted that she supports the 2017 Movement and asked her supporters to stand – and the vast majority of those present stood.

Harry Tindell focused his remarks on some data and his experience. The data included that he had higher finishes in more precincts than his opponent. He pointed to his eleven terms in the Tennessee House and his two terms on the Knox County School Board. He pointed to three issues he feels are important and will likely be left to the next council: Recode Knoxville, Magnolia Corridor Project and Traffic/Transportation issues on Broadway.

I expected a split vote. Each candidate presented good qualities and qualifications. On the one hand, the opportunity to have a black woman serve on council might be promoted. As a community-involved attorney, Ms. Parker seems solidly qualified.

On the other hand, Mr. Tindell has shown through his service over the years that he is capable and competent and would, no doubt, bring a solid understanding of the issues to the table. Clearly, Ms. Parker had energized her followers to attend the meeting and Mr. Tindell had a comparatively small number. I noticed that eight people would vote and wondered what might happen if there was a four-four split.

I needn’t have been concerned. In a roll-call vote, city council voted unanimously for Harry Tindell. Ms. Parker told me she wasn’t surprised. Mr. Tindell told me he felt it was his experience that convinced council to vote for him. He said he is confident of his chances in the general election. Councilman Grieve told me they had explored options and possibilities thoroughly, but that they had not discussed the candidates.

Outside an impromptu gathering of Ms. Parker’s supporters turned into a rally and a commitment to a write-in candidacy appeared certain. There was talk of a subversion of democracy in the manner in which the decision was made. Someone said the perfectly democratic way forward would have been for all three candidates to appear on the ballot.

One caveat: The election results have not been officially affirmed. Should a vote for either candidate be tossed or a vote added to either, then the actions of the council would, presumably, be voided. It’s not likely.

Early voting for the general election starts October 18, with election day on November 7. It’s a very different set-up, with all eligible city residents allowed to vote for one candidate in each district. Essentially each district chooses their top two candidates and voters city-wide decide which of the two will represent each district.

It’s a bit odd to think that a district might overwhelmingly prefer a particular candidate and be over-ruled by people not living in their district who select their distant second choice to be the representative. Electing our leaders seems like a simple matter. We vote and the candidate with the most votes wins. Except when they don’t.