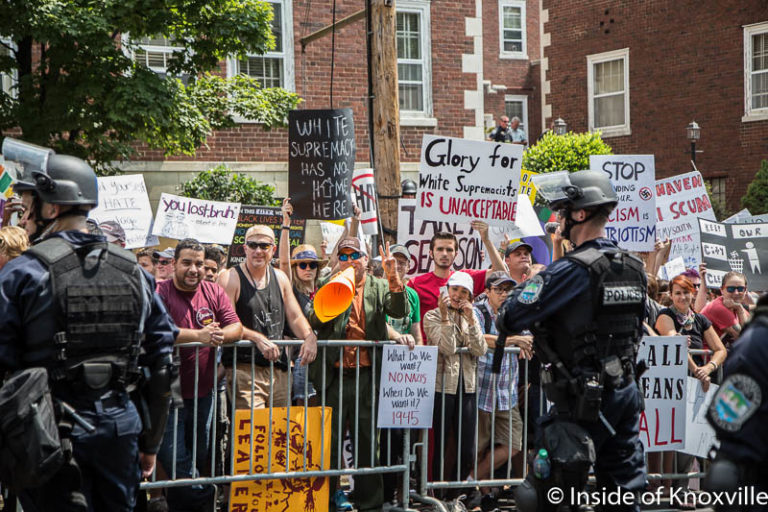 Almost 154 years ago, a twenty minute battle was fought at Fort Sanders. It was as brutal as it was short, with 129 southern soldiers and five union soldiers dead inside the fort. It would likely have been difficult for the combatants to imagine that over 150 years later opposing sides would square off on the same spot.

The city government took extreme precautions to make sure the rally and counter protest didn’t become violent. The entire area was blocked off by dump trucks in all the streets leading to the location of the monument on 17th Street. Police officers wanded everyone before they entered the area, pockets were emptied and any object conceivably of use as a weapon was banned.

The counter protesters whose numbers were estimated any where from 1500 to 3000 shuffled into an area on the east side of seventeenth starting around noon. The rally participants were moved into a set area on the west side of the road, but weren’t allowed to enter until 1:00 PM, the official start time of their permit. Between the two crowds were two sets of metal barricades and and a host of police forces in riot gear.

When I arrived at the site of the event, in attempting to photograph the officers searching the participants, I noticed a young man growing increasingly agitated by my photographs. In trying to shoot past him, he assumed I was taking his photograph. Later as I passed near him, he apologized, explaining that he thought I was doxing him. Clearly tensions and recent events have shifted our awareness and increased our suspicions.

I talked to a reenactor who was present, displaying the flag of the 23rd Tennessee regiment. He said he was there with his captain and that they wanted the men who died at Fort Sanders to be recognized. Insisting that it has nothing to do with hate, he said people don’t realize what these men went through.

Others on that side held rebel flags and signs supporting the retention of the monument. They referenced “leftist hate”  and insisted that they wished to preserve history. A small group held Bibles and a sign that said, “All Have Sinned, Lost Lives Matter.” They preached during the early portion of the rally, saying both sides were wrong. Most held no signs and said little or nothing throughout the rally.

What they didn’t have was any sign of Nazi attire or symbols that I could see. I’m not sure on what basis it could be said that they were neo-Nazis or fascists, though several expounded on white supremacist and white nationalist views in interviews with the media.

They seemed uniform in supporting the monument and their particular version of southern history. Some seemed frustrated that their message wasn’t understood, while others seemed more defiant, sometimes mocking the other, much larger crowd.

Totaling only about a couple dozen, most simply stared at the other side. I heard three of them yell at the opposition and two of those seemed particularly exorcised. One man continually held an American Flag upside down, which I never quite understood. No one gave a formal speech to their fellows, so it never really seemed so much a rally as a gathering. They posed for group photographs with the monument.

While on that side of the street taking photographs of the counter protesters one of them began yelling at me from across the street, calling me a “Nazi Photographer,” and mocking me for taking his photograph. Again, I realized how charged the atmosphere has become. I waived at my friend Yassin who stood nearby and continued taking photographs.

Those assembled on the other side seemed most unified along the theme of Knoxville rejecting hate. Lots of signs condemned Nazis and white supremacists. Clowns arrived with “White Flowers,” music was played. Groups sang the national anthem, “This Little Light of Mine,” “Na Na Hey Hey,” and “Jesus Loves the Little Children.”

Chants rang out from the counter protesters for much of the two and a half hours of the rally across the street: “Black Lives Matter,” “No Nazis, No KKK, No Fascist USA,” simply, “USA,” and a few Spanish language chants. The diverse crowds thinned a bit toward the end as the sun was brutal. Some people came and went as they got water.

What the counter protesters were not unanimous about was the monument. I spoke to several who want to see the monument remain or who felt ambivalent about its future. While chants calling for its removal did take root several times in the crowd, it clearly wasn’t a unanimous opinion.

When the time came to begin clearing the streets, each side was sent in opposite directions, emptying out onto the streets several blocks apart. Everyone seemed to go in an orderly fashion. No violence erupted. The one person arrested refused to give up her mason jar of water as she entered the protest site. People on both sides were hot and thirsty and it seemed the messages had been delivered.

So, what was won or lost or in any way altered? Both sides likely left satisfied and unchanged. I’m not sure the removal of the monument is even being seriously considered and, in any case, a final decision would not be a local one. The numbers of the counter protesters did dwarf those of the other side and many would likely feel that sent a message that our city isn’t about racism or hate. Maybe that’s the most that could be hoped for.

Meanwhile, in Krutch Park, a “Kindness Rally,” was held and I understand a few hundred people came there for speeches and music, choosing not to engage anyone at the site of the monument. I hear it was quiet and lovely. Everyone was safe and felt encouraged. One approach is to ignore people who hold fringe ideas so that they don’t get attention. Some people feared the rally and counter protest could become violent.

In the end, the city – both the government and the citizens – came out of the day looking like a place we can be proud of. The fact that we weren’t in the national news on Sunday morning is probably a victory in itself. Still, it feels as if our national nerves are on edge and we’re sounding more bitter, divided and angry. That doesn’t bode well for the near future.

I’ll have another forty or so photographs a bit later on the Inside of Knoxville Facebook Page.