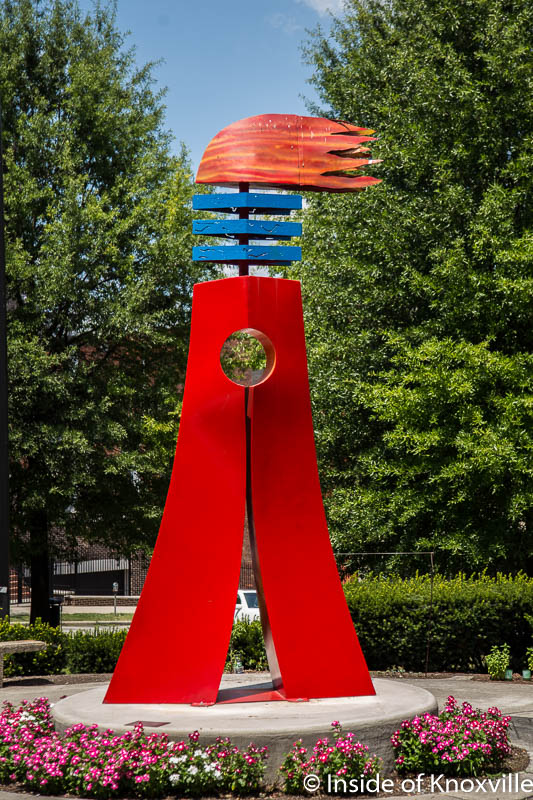 Every spring one of the most exciting parts of downtown’s re-emergence from the cold, hard reality of winter is the fact that colorful, often whimsical and sometimes beautiful or moving sculptures begin to spring up on Krutch Park. Art in Public Places features large scale sculptures that are installed around the area, but are particularly concentrated in downtown Knoxville. This year’s selections, “were juried by artist John Douglas Powers, Assistant Professor of Sculpture at The University of Tennessee. In 2016, Powers was named a Guggenheim Fellow.”

It’s an interesting approach to providing art for the city. We aren’t blessed with the large-scale sculptures that some cities boast, though we do have a few. Sculpture is a great fit for public art and it’s a significant attraction. If you don’t think so, take a bench in Krutch Park and watch person after person engage the art in some way or another. The permanent sculptures make an impact, as well: watch for a while any given day and you’ll see one visitor after another having their picture made with our suffragist women on Market Square.

Art in Public Places began in 2007 in an effort to both support local and regional (and now some national) artists, but also to begin framing Knoxville and it’s creative culture as a destination for the arts. Eddie Mannis and Bart Watkins provided the energy behind the initial push and Prestige Cleaners (Mr. Mannis’ business) continues to sponsor some of the works. According to Dogwood Arts, about 2.5 million people see the works in the McGhee Tyson Airport while an estimated (and eye-popping for our city) 13 million will see the downtown sculptures through the course of the year.

While the effort is headed by Dogwood Arts, sponsors making it possible include the Downtown Knoxville Central Business Improvement District, ORNL Federal Credit Union , the City of Knoxville, Prestige Cleaners, Liz-Beth & Co., Gerdau and the  Metropolitan Knoxville Airport Authority. The up side of having our art refreshed each spring is we enjoy the effect of a gallery being shifted for a new exhibition.

So, if it refreshes in spring, why am I bringing it up, now? I appreciate you asking. It turns out that, while the sculptures have been judged for the year by the professionals, with awards given for Best of Show, second and third places and a couple of honorable mentions, you now have a chance to select your favorite. You might want to wait to make your own evaluation so you aren’t influenced by the official decision, but if you want to see those awards, you’ll find them here.

The competition for the public’s favorite runs the entire month of July. It’s important to note that the sculptures you see pictured here does not represent the entire collection. I’ve pictured thirteen here out of a total of twenty scattered about the area from the airport, through downtown and out as far as Oak Ridge. Curiously, one of them is listed as being located at a, “residential location.” Not much chance for public viewing there.

I’ve had more than a few favorites over the years and more than a few that made me scratch my head. I’ve included the names of the sculptures here because just that small window via the artist is sometimes enough to bring more into focus the potential meaning or intent of the piece. At least I need that much help. Maybe you don’t.

In any case, it’s a fun stroll to see most of them collected together downtown and pick your favorite. You can see the others here and then place your vote here.

Looking for other free fun for the summer? Visit Knoxville, the Downtown Knoxville Central Business Improvement District (CBID) and Union Avenue Books, along with supporting downtown merchants are, once again, sponsoring a contest to Find Waldo! It’s a fun way to discover or remind yourself of downtown businesses and the kids have a blast. I took a two-year-old and an eight-year-old around for his first rodeo and her second and they both had a blast. Participants turn in their cards at the end for a chance to win prizes. This year’s contest has been so successful they’ve had to add a separate category for the adults who are doing it themselves. Details here and here.

So, come on down. The sun is hot, but much of the fun is free. Bring lots of water and dive in (maybe literally – run the kids through the fountain before you leave).