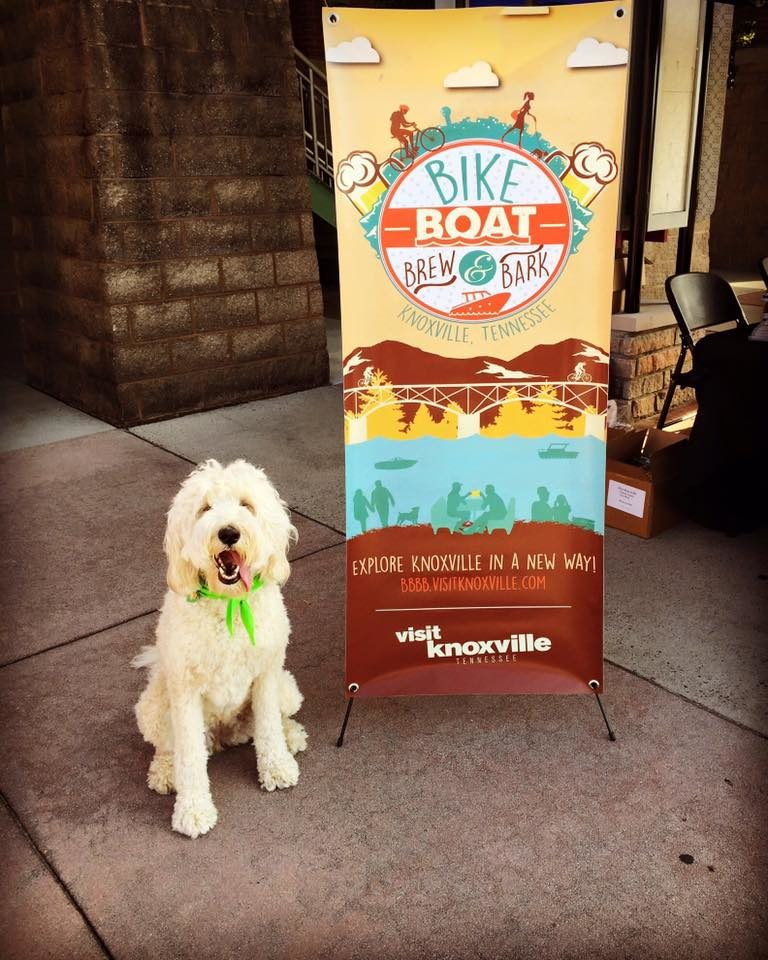 It’s really almost too big to wrap my head around for a small article. Knoxville is known for many things and we aspire to be known by others. Cycling, water sports, craft breweries and being dog friendly are increasingly part of our DNA. Bike Boat Brew and Bark is an annual event sponsored by Visit Knoxville is an opportunity to emphasize, explore and promote each of these. And then it’s more.

The first Saturday in June, June 3rd this year, is a time to bring together everyone from across the area who enjoys any of these pursuits and others who would like to explore the possibilities further. Volunteer Landing is ground zero for the event, but activities will stretch afar from that epicenter. Cyclists are encouraged to bike in or to take KAT buses, each of which are equipped to easily transport your bike to your destination.

Biking and brewing get their due with “slow rides” to breweries. Area brewers will lead bike rides from Volunteer Landing to one of the participating breweries, including Alliance, Balter, Last Days of Autumn, Crafty Bastard, Saw Works, Shultz Brau, Hexagon and Pretentious Beer. You’ll need to register in advance for these slow-paced rides, at a cost of $7 per person. It’s a great opportunity to explore cycling in the near-downtown area in the safety of a group and explore or simply enjoy some local brews.

Area cyclists may also want to check out a ride led by Bike Walk Knoxville from Cherokee Farm to Volunteer Landing and back. Cherokee Farm is just off Alcoa Highway. How in the world do you get from Point A to Point B? I had my own questions about that. Like crossing the river on Alcoa Highway? What?!? Participate to find out in a very safe ride which costs $7. Registration is required and space is limited.

But what about the boating and barking parts? The centerpiece of the weekend is the Visit Knoxville Powerboat Classic which features boats racing at speeds in excess of 100 mph. It’s free to watch these national competitors and a thirty-minute episode will be produced including footage of Knoxville which will be featured at a later date on Fox Sports South.

Also on the water will be a performance by Hoyt Hydrosports which will present their flyboarding antics between heats in the powerboat races. Barks in the water? Yep. The Smoky Mountain Dock Dogs will perform in this new and expanding sport. Our local group was the first competitive group formed in the state and Knoxville will play host to the World Championship of Dock Dogs the last weekend of October this year.

Meanwhile, back on land there is even more for dogs and humans alike. Young-Williams will host an Instagram pet photo contest. Tag your dog with #knoxfido and the pups in the two photos with the most likes at the end of the contest will win prize packs from CitiFid-o. You’ll also find all sorts of pet-friendly amenities to keep your pooch happy and safe for the duration of the event.

So, there’s your biking, boating, brewing and barking. We’re done, right? Not close. There are additional activities which fall into none of these categories and include some of the most intriguing opportunities to engage the city, its amenities and history.

TVA will offer an urban hike from the TVA towers to Suttree Landing Park. It’s a  great chance to take a fun urban stroll with a group and the pups are welcome, as well. The walk is about a mile-and-a-half each way, though you might want to peel off and sip some suds at Alliance or grab some coffee at Three Bears or Honeybee Coffee. It’s scenic, it’s safe and it should be fun, all the while, highlighting the easy connection between downtown and the south waterfront.

Want some history with your walk? What if you could have a guided tour of all the marble history markers lining the north waterfront? Wouldn’t it be cool if you had as an expert tour guide, the person responsible for all the research on those markers? Well, that’s what you’ve got as Jack Neely of the Knoxville History Project leads the tours talking about Knoxville’s considerable waterfront history as he goes. This is also a ticketed event costing $7 and spots are limited.

But wait, there’s more . . . Featured will be an Ingress Mission Day plus GORUCK Scavenger Hunt. Don’t know what that is? You may be old. Utilizing the same technology as Pokemon Go, Knoxville was a host site for an Ingress event at last year’s Bike Boat Brew and Bark event – well before the Pokemon Go craze hit the city. Well over 200 people participated in the, “location-based augmented realty exergame.” You can register here and a group photo starts the day at Volunteer Landing. I’ve included a video to explain the event, but suffice to say, this is the kind of event that is typically found in major cities around the world. Exhausted? Me, too. It starts at 10:00 AM at Volunteer Landing on June 3 and ends at 4:30 PM that afternoon. Full schedule here. It’s a rain-or-shine event, though the boat races will be delayed to Sunday in the event of inclement weather due to safety concerns for the boaters and in order to facilitate the filming. Register now for the events that require it. Spots are limited for some and may fill before the day of the celebration.