What Should We Expect from Transit $ in the Near Term? 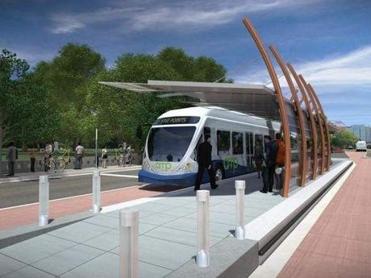 We live in interesting times. An unpredictable president is joined by a Senate and a House under control of the party with which he has aligned himself. Yet, it’s a party which he has taken stances at odds with their typical beliefs and priorities. He has proposed massive spending on infrastructure which could mean very different things depending on how infrastructure is defined and where priorities are placed.

At the state level, Tennessee is, and has been for some time, controlled by the Republican Party. Governor Haslam has introduced a six cent hike (over three years) in the gas tax to fund infrastructure improvements. Last year an attempt was made by Republicans to specifically limit use of those funds to providing for better car transportation, disallowing its use for mass-transit, cycling or pedestrian improvements. That provision is not currently included in the state legislation, though what percentage of those funds might be allocated for any transportation other than automobiles is not clear.

That there is a need seems to rise beyond disagreement. Our infrastructure – not only transportation, but electric grid and water systems – is crumbling after years of neglect. We have built faster than our ability to maintain. In Atlanta I-85 is closed after a fire erupted beneath it. Just yesterday 1-20 was closed through Atlanta due to a gas line problem beneath it which caused a section to crumble.

We also are seeing a dramatic increase in pedestrian deaths. In 2016 there was an eleven percent increase in pedestrian deaths on roads and the figure represented a twenty-two percent increase over 2014. In a recent ranking of the deadliest cites for pedestrians, Memphis finished in the top ten, with Florida running away with the state prize. The conclusion was that most of the pedestrians killed are poor, elderly and people of color who have no choice but to walk in dangerous places because of a lack of public transportation to take them to jobs and necessities. A recent court ruling could have long-term implications on the direction cities take when it ruled that NYC is liable for injuries on streets without traffic calming.

Governor Haslam’s proposed gas tax has progressed though all committees and appears to be prepared to receive a vote on the floor of both the Tennessee Senate and House. A group of Republican House leaders including Beth Harwell, Glen Casada and Ryan Williams, however, are making a late attempt to shift the bill’s funding to state surplus as opposed to the gas tax. A provision of the bill also allows local municipalities to increase local taxes to fund mass transportation. Others have pointed out that the absence of specific language regarding mass transit in the bill makes it likely that none of the money will go in that direction.

To be sure, there are ongoing efforts to continue the kinds of efforts we’ve often discussed on this blog: A recent article in The Hill, an influential conservative D.C. publication implores congress to work with cities and towns to solve their unique transportation needs while encouraging better land-use policies which will ultimately reduce demand on infrastructure. Boston recently announced a commitment to become the most walkable city in America. Some editorials are stating clearly we do no need more roads, rather fewer, and extolling the federal government not to use any new money on new roads.

Still, these efforts are scattered and mostly found in cities. The Republican Platform on which Trump was elected, though he may or may not adhere to its tenets, was openly hostile toward mass transit with Republicans calling it, “an inherently local affair that serves only a small portion of the population, concentrated in six big cities.” Additionally, the platform calls for no federal involvement, specifically, in, “bike-share programs, sidewalks, recreational trails, landscaping, and historical renovations,” arguing that money for these community game-changers should come from “other sources.”

With Elaine Chao recently named to be Transportation Secretary, she has already been lobbied by Republicans to stop mass transit efforts around the country. She recently delayed funding for modernizing the commuter rail line between San Jose and San Francisco, putting a project that was funded and seemed certain into jeopardy. Since that move, “State lawmakers in Minnesota are appealing to Chao to sink Minneapolis’s Southwest Light Rail, a 15-mile route between downtown the western suburbs expected to draw about 35,000 weekday passengers.” State Senator David Osmek wants the $929 million in previously approved grants diverted from the project, even if it means his state loses the nearly $1 billion.

We’ve had a similar drama play out in Tennessee when Mayor Karl Dean had lined up funding for a rapid-transit bus and had it killed by Republican state legislators funded by the Koch Brothers, “Americans for Prosperity,” group. Officially listed as a social welfare lobbying group which, “doesn’t have to identify who gives it cash, how much it has received.” Beth Harwell was also involved in the effort to stop the funding for Nashville’s transportation project and the same Koch group was behind the effort to prevent medicaid expansion in the state.

So, why would one party be opposed to a type of transportation? The split relatively mirrors the split nationally and in our state between the more Democratically controlled cities and the increasingly Republican-led state governments. Mass transit more often benefits cities and representatives of rural areas have no need for the voters in the cities. It is consistent with the ideological struggle in which the cities are more progressive and the more conservative state governments attempt to control their left-ward bent.

So, what are our prospects of improved pedestrian, cycling and mass transit facilities. Probably not good. Light rail for Knoxville? An expanded bus system? Shelters at bus stops and an increased rate of expansion in bike lane development? Here’s hoping I’m reading the tea leaves incorrectly, but it appears if any of those things happen, big or small, they will happen in the face of opposition from the state and federal level.