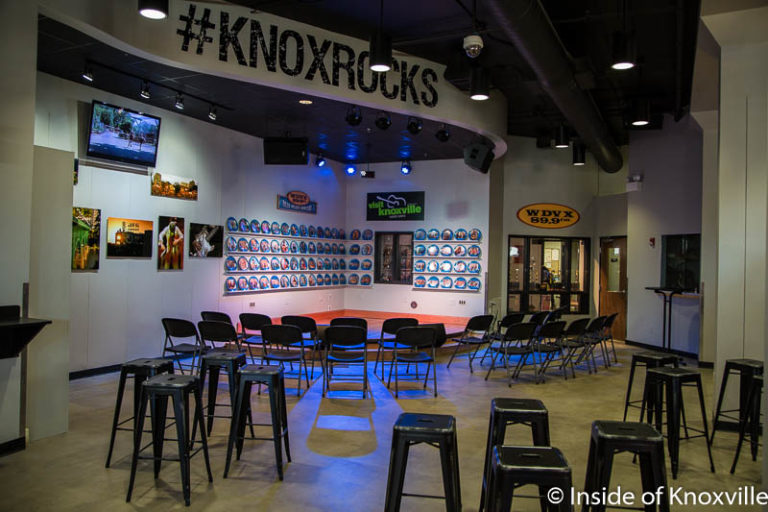 Yesterday, Visit Knoxville offered a small preview of the new look of the Visitor Center and today the public is invited in to experience the new space. Established in 2004, the basic look and design had not been given a makeover in the subsequent thirteen years. While visitors from other cities liked what they found, Kim Bumpas, president of Visit Knoxville and the staff felt it could be both more visually appealing and functional.

During the construction, the main visitor interface has been in a portable cubicle in the parking lot. The retail portion of the space was closed. Most noticeably to locals, the WDVX Blue Plate Special operated only sporadically and in different area venues. It left a hole in the downtown routine for many people and temporarily removed a very unique selling point to people passing through.

The first changes you’ll notice are outside. The columns in front of the building at 301 are no longer blank spaces. New coverings featuring historic Knoxville photographs, shots of Knoxville landmarks and more decorate the visible sides. Warm tones and interesting images as well as clear markings of the address and the function of the building should draw in some visitors and locals alike who might have previously wandered past.

Once inside, more changes are obvious. The space has been opened up greatly by virtue of removing the large counter in favor of a smaller, attractive wood and granite desk where visitors will be greeted and may purchase maps (local maps are free with the other brochures) and beverages including coffee (Green Mountain), hot chocolate, cider and bottled water. Above the desk is a welcome sign in twenty-one different languages. According to Kim Bumpas, that’s the number of languages spoken by last year’s participants in Destination Imagination.

In addition to opening the space by reducing the counter, and taking advantage of the room it freed, the brochures which encumbered the view from the back during the Blue Plate Special have been moved to the side and collected together more cohesively than was previously the case. Multiple monitors above them and throughout the center run a loop produced for the Visit Knoxville Network, telling the story of Visit Knoxville and of the city. Soft seating areas have also been added for use when the Blue Plate is not in session. Like so many pieces in the new design, they can be easily moved to adapt to the function needed for various events.

As before, everyone is encouraged to bring a lunch to enjoy during the shows. Kim mentioned that the show is known by groups traveling through who will call ahead and reserve some spots before getting on their way, again. She hopes the new center exposes more of the city to these guests than was previously the case, in hopes of enticing them back for a more extended stay.

Other changes include warmer colors throughout with more use of metal and wood and less of the dated color schemes and materials previously in evidence. The floor was previously a “drab yellow” with the old logo displayed. The new floor is a nicely finished, naturally colored cement, giving the center more of an urban feel than was previously the case. The stage remains, but has a new finish and new lighting which, for photographers everywhere, is cause to celebrate. Visit Knoxville’s promoted hash tag, #KnoxRocks, is written in bold letters above the stage.

The wall colors have been changed to gray, and the large counters for merchandise have been exchanged for sleeker displays. It makes the area feel much more open, though the same products are present – and important to represent us. Kim pointed out that, “better than 90% of it represents local artisans.” New seating hadn’t arrived as of yesterday, but should be more comfortable and attractive.

The changes have been under consideration and in the planning stages since 2014 and over $120,000 was spent on the project. Kim said, “We are beyond excited. Tomorrow is going to be an awesome day.”

Which brings us to today’s Grand Re-Opening. The center opens at 8:30 AM for anyone who wants to take a look. You’ll find some of the local artists whose work is represented in the shop present to talk about their work. The Blue Plate Special returns at noon with a preview performance of next week’s Women in Jazz Jam Festival. But the music doesn’t stop. It keeps rolling through the afternoon and into the night with local favorites Guy Marshall and Sweet Years and other regional and national artists offering a wide range of styles. Come and go. Come and stay. But, for sure, come check out the new look.