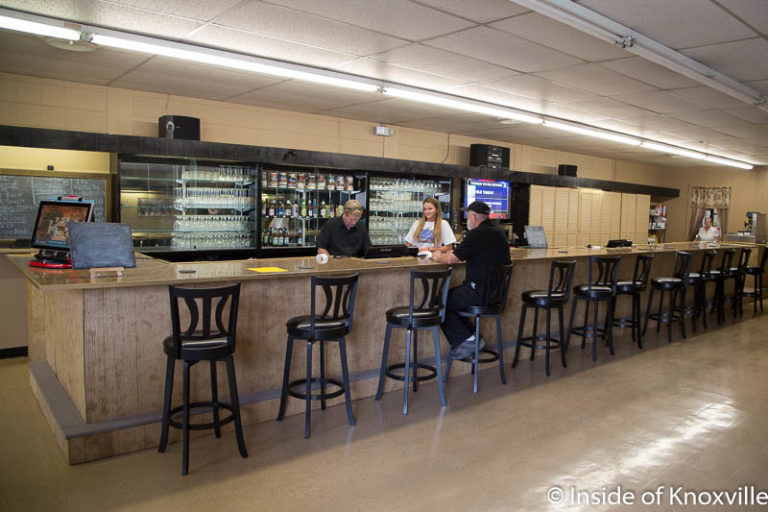 City Lights Bar and Grill opened March 1, at 1103 Sevier Avenue, with the intention of becoming a neighborhood bar. From the sounds of it, they are off to a good start. A customer named Justin is such a regular, the nachos are named for him. Another, Gary Underwood, has already been designated the new bar’s, “Norm.” They are excited about the location and hope to become a part of their community.

The bar is very much a family affair. I met with Peg Wilton, the manager and Pete Condon who was working behind the bar. They are brother and sister. Pete’s daughter, Megan, a current student at UT, was serving while we talked. The mural you see in the photos behind the stage is  Megan’s work in progress. Jennifer, Peg’s daughter, is also a partner, but was home taking care of their ninety-one-year-old father who was out of sorts, but getting better and already giving everybody fits from what Peg and Pete told me.

Pete and his parents moved to Knoxville seven years ago. He said the change of seasons and cooler weather attracted them and they already owned a vacation home in the area. When their mother died last year, Peg and Jennifer moved to Knoxville from Vermont to help with their father. The group decided they wanted to open a business, deciding on a bar. They’ve always been entrepreneurial – Pete owned a pool company in Sarasota, Florida and now works with a local pool company, while Peg owned and operated homes for seniors in Vermont and also did some catering.

They found the building, owned by Henry and Wallace, and leased the 3600 foot space. They said they initially thought the building would be move-in ready – it had previously housed a bail and bond business, but before that it had been a pharmacy. They learned they had to make substantial changes to the structure to make it ADA compliant and to meet codes and zoning requirements. They’ve been working on all of these issues since last June.

Still waiting on their liquor license, they expect it next month. That will allow them to offer wine and mixed drinks. They are also still waiting on their approval from ASCAP in order to be able to host live music on the stage they’ve built. Plans are in place for trivia nights and other special events, as well as karaoke. A patio will be constructed in front of the building, taking several of the parking spaces now located there. The patio will be dog friendly.

The non-smoking bar (there is a smoking area out back) has  pool tables, dart boards and electronic games featuring regular golf on one and putt-putt on another. A machine at one end of the bar is loaded with numerous games. The juke box caught my eye and I learned that it plays off an app. Once customers download the app, they can pick from tens of thousands of songs and pay 50 cents to a dollar per song via their itunes account. The juke box reads the requests from the phones present and plays the songs.

They are currently serving a range of craft beers, including Black Abbey and Saw Works, Blue Moon and Sweetwater. The beers served and anything else is subject to change as they plan to listen to customer requests and respond accordingly. Pete said they are very laid back. He mentioned a group of cyclists who wandered over from Alliance to shoot pool and who were concerned about their bikes, so he let them bring the bikes inside. Peg says she enjoying getting to know people in such a hands-on business.

Listening to the community also includes details like hours. The current hours are 5:00 PM – 10:00 PM Monday through Thursday, 5:00 PM – 11:00 PM Friday and Saturday and closed on Sunday. That said, they don’t close if they have customers, or as Pete put it, “If you’re drinking, we’re open.” He also said during the NFL season they will open on Sunday for game-viewing. They also hope to build their customer base to the point that lunch service becomes a reasonable move.

Light food is offered on a regular menu and special supplemental menus will be cycled through like their clever “appreciation” menu included above. It won’t likely stray far from sandwiches, soups and salads, but there will be special food for special occasions, like the beef stew they served on St. Patrick’s Day.

The space is also available for rentals for parties or other events. You can follow them on their Facebook Page or Instagram and on their webpage.