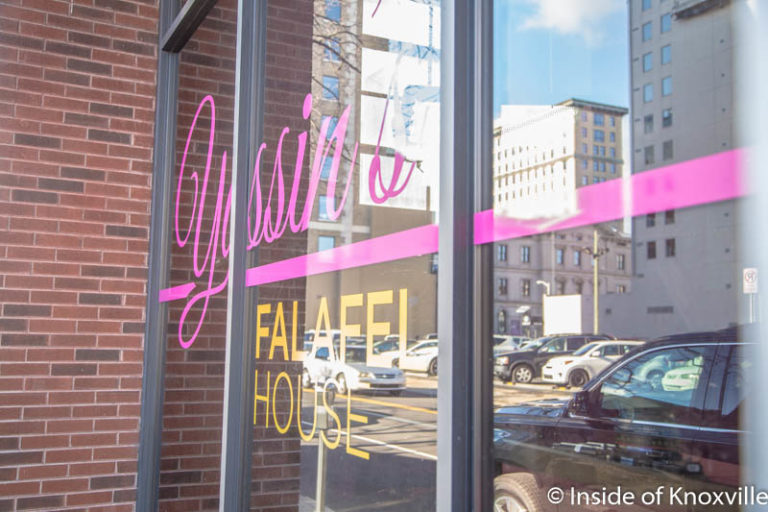 Last week, a big moment in Yassin Terou’s life, and in Knoxville, came to fruition when Square founder and Twitter CEO Jack Dorsey came to town with a video and production crew to debut an eight-minute film about Yassin’s experience as a Syrian Immigrant in the U.S. CNN was on-hand for the invitation-only event at Yassin’s Falafel House. Mr. Dorsey spoke to the press, Yassin and Mr. Dorsey were interviewed by CNN and Mr. Dorsey interviewed Yassin as a part of the debut of the video spotlight.

As part of the festivities, Yassin did what he does: he fed everyone his amazing food. Mayor Tim Burchett was there, media and friends, some of whom Yassin thanked publicly. Applause and hugs were plentiful, smiles and good conversation abounded. Yassin thanked the Knoxville community for the support and the love was palpable.

I attended both as a friend and as a member of the media. As a friend, I could not have been more happy for a good person to be recognized for what he has accomplished. Coming into a foreign culture, not speaking the language and making a life, not to mention a very successful business, is an amazing accomplishment. Drop me into a middle-eastern country and I’m not sure the outcome would be so positive.

Jack Dorsey said the emphasis on the businesses who use their product wasn’t new, but it is more important now than ever. “We think our customer’s brand is more important than ours.” Of Yassin, he said, He has, “a really inspiring story about his desire to help his community. His desire to help his community, his emphasis on inclusion and his passion for food fits who we are, perfectly. We brought him to San Francisco and fell in love with him.”

Yassin, for his part, said he is passionate about food because “food makes conversation and it is easy to connect. Knoxville people love food and new things.” He said he has learned to, “Be who you are, be patient, focused and smart. Be equal with your employees.” He added that people, “Come in for the food, then they know me. I love this community. Treat everyone with respect and love and you will get it back.”

Of his goals, he said, “A store in every city, to give the same opportunity to others.” He said his favorite thing about the city is, “The people. They are strong, smart, very supportive and they will not let me down.” He thanked Nadeem Siddiqi who helped him with funding to get started and he thanked Shaun Parrish of Old City Java and Wild Love Bakehouse for support. He summed it up, “The American dream is life. The American dream can be real. Here you have an opportunity to make it.”

Of his new life, he said, “Every time I walk in downtown, I feel like I know everyone and they know me.” Of his friends and family in Syria, he said, “It makes me sad. We pray for you, to stop the suffering. We want to build a bridge to bring you here. We think about you every day.” He ended by saying to his new city, “Thanks for adopting me.”

As a member of the media, I knew others would have the story out by that afternoon. And it was true, from local media to CNN and USA Today, it was out immediately. That is the state of reporting. Hit it, move on. I had another article planned for the next day, so I accepted two things: That I would report it, because it is important and because I call Yassin my friend, and that it would be a story past its expiration date by the time I shared it. Readership would be low because it would be old news. I didn’t care.

Then, late Friday, President Trump announced his ban on travel involving seven countries. One of the countries was Syria. Additionally, refugees would not be accepted from these countries for 120 days and from Syria, specifically, indefinitely. On Saturday confusion ensued as the Trump leadership team had, apparently, not discussed the move with the various agencies which would normally be consulted. First, green card holders were included, then they weren’t, then they might be.

The result was chaos. Spontaneous demonstrations developed at airports and spread to other locations, including Market Square, by Sunday afternoon. Senators McCain and Graham were the first Republicans to speak out against the move. Other Republicans followed. Neo-Conservative fixtures like Bill Kristol spoke out against the move and conservative financiers and billionaires, the Koch Brothers, expressed their opposition by Sunday evening. Leaders of Britain, Germany and Italy condemned the move, while Mitch McConnell refused to criticize it, saying the courts will have to make a determination if it has gone too far. The ACLU convinced a justice to stop a portion of the directive. The ACLU raised over $24 million online – as compared to the $4 million typically raised in a year.

Reports of stranded students and professors, engineers, and others traveling abroad when the ban suddenly hit, circulated widely. The recent Clemson Ph.D. graduate who had lived here seven years and was refused re-entry went viral. An Iranian national holding a non-immigrant visa was stranded in Canada could not get to his family in Texas. A judge ordered a hold on a portion of the ban, but Homeland Security seemed to simultaneously say they would ignore it and and enforce it. Five were killed in a Mosque in Quebec. Unrelated? Maybe.

Suddenly, the story could not have been more relevant.

I called Yassin to touch base and ask how the new edict was impacting him. He, true to form for the man I call my friend, said he wants to remain positive. His situation is complicated, he said, because his wife, “is a U.S. citizen who has been in the U.S. for seventeen years.” She was born in Jordan. His daughter is a U.S. citizen both because she was born here and because her mother is a citizen. He said rumors are circulating that birth will not be enough if the parents are foreign born, and that is a worry to him.

More immediate, his brother is in Turkey and he’d planned a visit, which is now out of the question. He worried of what would happen if he was refused re-entry. Turkey would not keep him. He would be sent back to Syria where he says he would be in danger. His family is in Syria and his hopes of bringing them here is now put on hold indefinitely. He worries that going forward something as simple as a traffic ticket could result in the revocation of his green card.

As of the time I wrote these words, the extent of the implications of the Presidential immigration order continues to be unsettled. It is unknown if the students who happened to be traveling abroad will be able to return to the U.S. to finish their studies or if the international employees working for U.S. companies and holding a HD1 visa will be allowed to return. Perhaps it will all be sorted out with minimal long-term harm.

Harm is done, however, in many ways, no matter the outcome. Immigrant populations are more nervous than ever and many fear that long-term damage may have been done to the U.S. reputation, ironically endangering us to a greater degree, as opposed to making anyone more safe. And one thing is clear: Yassin’s story continues to be very relevant.

I’ll leave you with the videos from the weekend, one telling Yassin’s story and the other the CNN interview. The only thing certain at this point is that the story isn’t over.