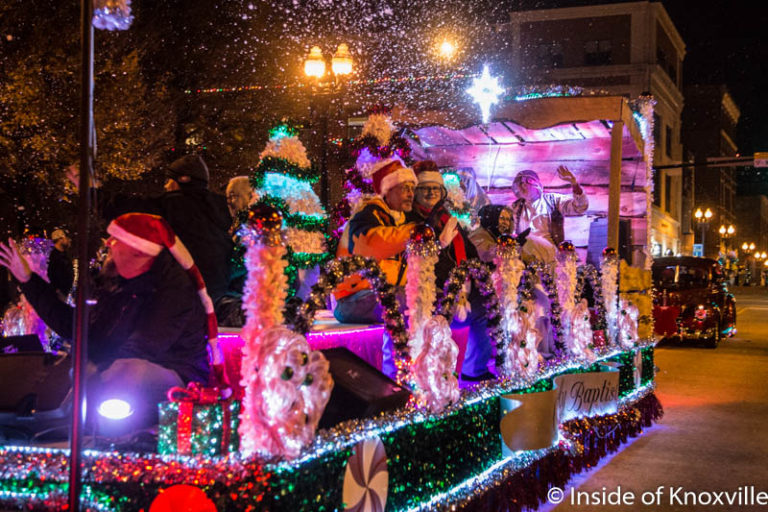 For starters, the weather was just about perfect for the thousands gathered for the 2016 Knoxville Christmas parade. Temperatures were cool enough to feel seasonal, but not bone-shattering cold and there was no rain, though who could complain at this point if there was? We joined the smaller crowd on the 100 block again this year and it was just about perfect, as well – enough people to be festive, but not so deep and crazy as the other end of Gay Street.

We got our coffee from Sugar Mama’s and settled in to enjoy a fun parade. Urban Boy (age 1.7) stared in complete disbelief the entire time, as if not certain if this was a simple hallucination or another in a series of inscrutable bizarre rituals adults observe to confound children. Not impressed. Urban Girl (age 7.5) on the other hand, loved every minute.

This year’s parade seemed about the right mix of all the predictable component parts. Some pretty good floats joined some that could have used more work, as always, but on average, they seemed a step better this year. Maybe it was just our group, but that was the consensus. The parade kept a good pace –  in fact it moved faster than we expected and two of us missed the first bit – and lasted long enough, but didn’t drag out into the night.

One thing that seemed a bit different to me, though maybe it was just my perception is that more children were included, from little cheer leaders to little scouts and baton twirlers and just children riding on the floats. And I’m good with that. Urban girl loved seeing her peers and, after all, that’s what it’s about.

I loved the balloon people, or whatever they were and I can never get enough marching bands. In fact, that seemed one category that could have been increased. I’ve seen my friend Greg post on FB something we’ve talked about in past years: How strange is it that the UT marching band doesn’t participate? It’s such an obvious inclusion and something that would make our parade completely unique. In fact, why is there no UT involvement? Seems weird to me.

The grown-ups in our group really appreciated the inclusion of – and the impressive detail of – the two vehicles from Christmas Vacation. Lost on the children who haven’t seen it, yet, it was perfect for everyone else. For the kids, extra points to the floats that included bubbles or other simulated snow. Urban Girl was all about it.

Another conversation we’ve had on this blog in the past – I think, again, led by Greg – was the obvious opportunity for a group of bikes. And this year we got two groups of bikes, which was very cool. Dream Bikes, which I wrote about recently, had a group of young folks on bikes and a group I didn’t catch had their bikes all tricked out with Christmas lights. Good prep for the upcoming Tour de Lights.

Visit Knoxville had a good float this year, and I don’t remember that from before, so that was a good addition (or did I miss it before?). I appreciated that there was a good many floats referencing the Christmas story, though it did startle us a bit to see the creche hung from a crane. The Molar Express was a great inclusion and we loved the vintage Ice Cream truck, though I suppose its inclusion was a bit random.

I’ve needled Dollywood in the past for their float, which isn’t bad, but should, logically, be spectacular. This year it felt a little different in light of last week’s fire and it was just good to see them representing in spite of it all. Also poignant this year, the float of “heroes,” which included not only our military, but also (I believe) a park service worker, firemen and others. Firemen are the real deal. I was happy to see a sailor included, as it reminded me my Dad was once a young seaman just like that guy.

The little float with the deer, racoon and snowman added beauty to the proceedings. Loved the various Grinches and the Seuss characters. A number of cool vehicles were included, but the Premier bus took our breath away just a bit. Very beautiful – and even the ceiling of the bus had some sort of cool psychedelic light thing happening.

Urban Girl really dug the singing Santa face, which had been in the parade before, but this was the first year she really got it. The inclusion of the petting zoo animals was perfect. Urban girl missed the baby goat, but petted a chicken and thought she was the stuff. Regular farm girl, that one.

Navitat (from Ijams) brought a van, but made the most of it with a lot going on atop the vehicle and maybe the most clever theme of the night for their zipline business: Joy to the Squirrels. Very cool. We also loved the tradition included in the form of the vintage Knox County Transportation bus and, likewise, a little Mull action (if you have to ask, you haven’t been around here very long). We can riff on the Mulls all night.

I really could go on and there is no way I can include all the good pictures here, so you’ll have to watch for them later on the Inside of Knoxville Facebook page. Maybe the best Christmas parade in a while? I thought so. What did you think?