Give a Piece of Knoxville Music History For Christmas: Arthur Q. Smith Honored 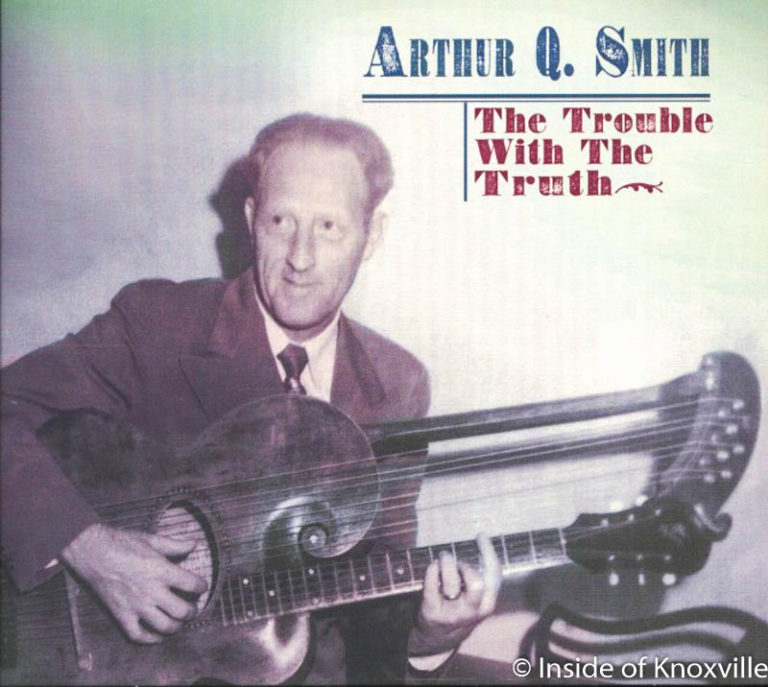 I’m sure more than a few of you are looking for that perfect, last minute Christmas gift. I’m also sure many of you love Knoxville as much as I do and like to support local writers and musicians, as well as honoring the history of our beloved city. Well, there’s a way you can do all of the above at once.

A couple of weeks ago a series of special events honored country music songwriter and Knoxville citizen, Arthur Q. Smith. Born Arthur Pritchett, he lived his life in Knoxville and is buried here in the veteran’s cemetery. His history had been largely forgotten, but he’s finally getting some of the recognition he deserves. December 9, a ceremony was held on Jackson Avenue sponsored by Visit Knoxville, WDVX and the Tennessee Archive of Moving Image and Sound, which is affiliated with the Knox County Public Library.

Tennessee Department of Tourist Development Commissioner Kevin Triplett and family members joined the ceremony at the marker, which is the fourteenth stop on the Cradle of Country Music Walking Tour, which, if you haven’t, I would encourage you to take sometime. The marker isn’t randomly placed, located just outside the former Three Feathers Sandwich Shop and Tavern at 101 S. Gay Street. It was here that Arthur drank, wrote songs and sold them to many of the performers from the WNOX Mid-Day Merry-Go-Round. Sometimes selling them for as little as his bar tab, he quite often didn’t get credited for his work.

Jack Neely wrote the text for the walking tour, while Bradley Reeves of TAMIS and local music critic Wayne Bledsoe wrote the 124 page biography which is included in the double CD on Bear Family Records. Country stalwart wrote the introduction, in which he states the case for Arthur’s induction into the Country Music Songwriter’s Hall of Fame. In addition to the CDs, you’ll also find numerous vintage photographs of a golden era of country music in Knoxville.

But it’s the music that takes center stage, as it should. You’ll be stunned at the classic country artists who recorded songs written by Smith and rarely gave him credit. Some of the greatest names in country music are included on the first disc performing his songs. Roy Acuff leads off with a fine rendition of “My Tears Don’t Show.” Kitty Wells and the Carlisle Brothers follow before Hank William’s classic recording of “Wedding Bells.”

It’s stunning to realize that one of, if not the greatest country songwriters of all time also used Arthur’s talent. Carl Smith, Mother Maybelle and the Carter Sisters, Carl Butler and Ernest Tubb also have cuts, as well as Don Gibson, Stonewall Jackson, The Osborne Brothers, Little Jimmy Dickens, the Stanley Brothers and Ray Price. Bill Monroe and His Bluegrass Boys chime in with the Smith penned, “How Will I Explain About You?” Bill Monroe is said to have acknowledged, late in his life, that more than one of his recordings for which he was given writing credit, was actually the work of Smith.

The second disc is dominated by the fifteen existing recordings of his songs performed personally by Smith. Some are classics, others not as much, but they all have a way of getting under your skin. I’ve hummed several around the house over the last couple of weeks. “Blue Lights, Blue Hearts, Blue Music,” and others stand out. Smith’s voice on that song is haunting and isn’t easily shaken. The disc ends with Marty Stuart’s version of “Be Careful Who You Love.”

The fine CD was released the night of the dedication ceremony with a party featuring old footage and lots of great music in the Emporium. Planned for the Black Box Theatre, it had to be moved into the larger hall when a couple of hundred people arrived. The thirty copies brought for the event quickly sold out as Smith songs were performed by some of the best in local talent, from Nancy Brennan Strange, the Tennessee Stifflegs and the Barstool Romeos. Tim Stafford of the recently Grammy-nominated Blue Highway contributed a set and Bill Alexander, the Appalachian Hippie Poet recited some of his work.

It was a perfect urban evening with lots of friends in attendance, great music and a mutual admiration and respect for our city, its history and its artists. If it sounds like something you or someone you love might enjoy, you’ll find it at Amazon.com. Copies cost $40 and the CD fits perfectly into a stocking. Share it with someone who loves good music and Knoxville history. It’s a can’t miss.