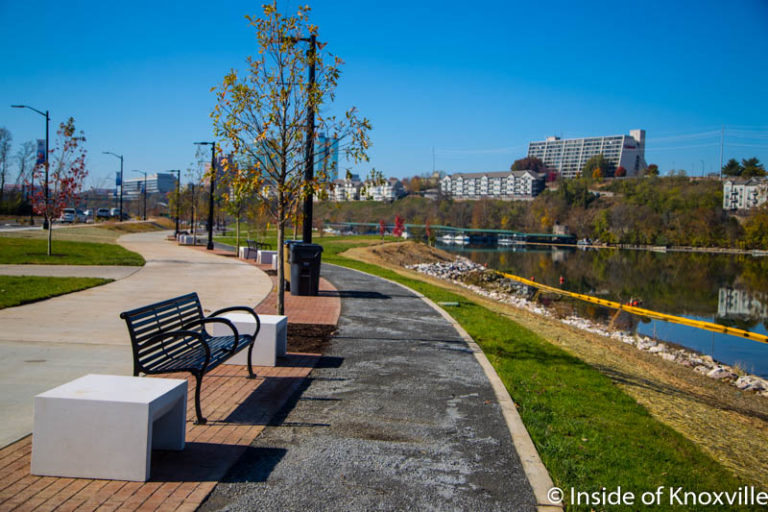 I wasn’t able to make the ribbon cutting on Wednesday, but curious about Suttree Landing Park, I took the ten minute bike ride from the heart of downtown and across the river. Signage hasn’t been placed, so the first trick was figuring out how to enter the park. There are two entrances, with the first being via Dixie Street which turns left off Sevier.

For novice bikers, I would suggest the other entrance, as Dixie involves a steep hill. Tricky to see, it’s the left option of the three pictured here, just past It’z My Time Hair Salon and Boutique. Using that entrance places the visitor at the eastern extreme of the park. Most importantly, it’s flat. The park stretches from there westward to the large gas tanks you can see from the city. It also offers a pretty view north toward the Knoxville skyline.

The park is a strip of land running along the river. Not all of it is completed and tractors and workers welding pressure washers formed the background to my visit. What has been finished is very nice, with benches lining one of the two walks paralleling the river and a soft-packed running surface running along side the walks. Peninsulas jut out into the river and boast picnic tables, one of which was in use during my visit.

It’s the city’s first new park in twelve years and it measures in at just a bit over eight acres. On completion, it will include, “festival lawns, a children’s playground, a put-in for kayakers, accessible river overlooks with picnic tables, and a public riverwalk.” I think the festival lawns and the put-in for kayakers may be still under construction. I looked for a place I could pull a canoe ashore because it would be really cool to rent one at Outdoor Knoxville/Billy Lush and row over, but I couldn’t spot where I’d beach the thing.

The cost of the project, originally announced as $6.1 million for the park and the new Waterfront Drive, which runs just about 3,000 feet along the park. Final costs came in closer to $6.6 million. According to the press release, environmental features were also included, such as, “LED road and pedestrian lighting. Specially-designed engineering features – like bioswales and pervious concrete pavement – make sure the runoff that reaches the Tennessee River is clean water.

Praising what has been done, Mayor Rogero made it clear the efforts on the south waterfront are not finished, “The park is a wonderful amenity. It will be a favorite gathering spot for families and outdoor recreation enthusiasts for decades to come. It’s stunningly beautiful. . . In addition to this park and supporting infrastructure, more than $160 million in private investment has been committed to the South Waterfront commercial corridor along Blount, Sevier and Island Home avenues. And within a year, a mile of the South Waterfront riverwalk will be completed.”

Fittingly, “Poet Laureate R.B. Morris concluded today’s ribbon-cutting by reading a passage from Cormac McCarty’s 1979 classic novel Suttree.”  It’s striking to consider that we have a city park named after a more than rough-around-the-edges fictional character. From where I sit that’s a pretty cool thing for the city.

While I was there I saw walkers, a jogger, picnickers, a family on the children’s playground and a father and daughter exploring the park. The day was beautiful with a perfect blue sky. Take out the haze from the fires burning around the city and it might have been perfect. It would be a great spot to take the family during the Thanksgiving holidays next week. If not then, I’d encourage you to explore the park when you are able. It’s a nice spot.